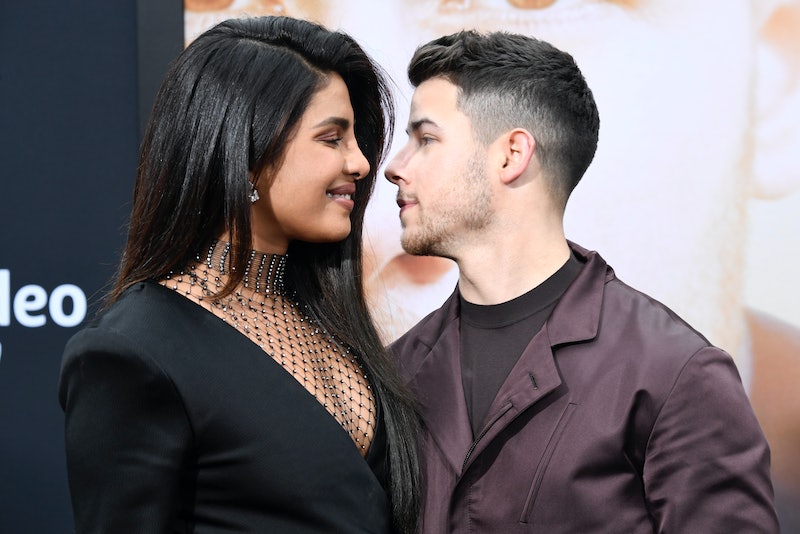 Life is good for the Jonas Brothers right now. Their recent reunion has thrilled fans across the globe, their new album is a certifiable hit, and they've all officially settled down with their respective soulmates. Now, there's yet another momentous occasion for their families to celebrate, and Nick Jonas' birthday tribute to Priyanka Chopra is a true testament to their love.

First of all, fair warning — what you're about to read will undoubtedly give you all the feels. It's seriously so, so heart-warming. Jonas didn't like, wax poetic in an unnecessarily lengthy paragraph, though. He kept it short and sweet, while also making it abundantly clear how much his wife means to him.

On July 18, Jonas posted two pictures of Chopra on his Instagram page in honor of her 37th birthday. The shots appear to be from Joe Jonas and Sophie Turner's recent wedding in France, where Chopra was seen wearing the same pastel pink sari.

"Light of my world. My whole heart," Nick captioned the pics. "I love you baby. Happy birthday." See? Told you it would give you all the feels.

As if that weren't enough, Chopra got some birthday love from a few other members of the extended Jonas clan, too. Denise Jonas (aka, @mamadjonas) shared a lovely snap of herself with her daughter-in-law on her Instagram Story, which looks like it may have been taken at Chopra's wedding to Nick in December 2018.

"Gorgeous birthday for a gorgeous girl!" Denise captioned the pic. "I love you Dil," she wrote, followed by the lips emoji.

"Dil," by the way, is not a nickname that refers to pickles. It's actually the Hindi word for "heart." Chopra spent her childhood growing up in India, and incorporated Hindu traditions into one of her and Jonas' wedding ceremonies. Knowing the meaning behind it just makes Denise's message to her daughter-in-law that much sweeter, doesn't it?

Turner gave Chopra a special birthday shoutout on her Instagram Story as well, and included a picture of the two of them looking hilariously cozy. "HAPPY BIRTHDAY TO MY SIS," she captioned the shot. which shows Chopra sitting in Turner's lap while they're both wearing paper crowns. "Love you," the Game of Thrones star added.

Not to be outdone by his new wife, Joe posted a tribute of his own to Chopra for her 37th. In the pic he shared on his Instagram Story, Joe is holding up the July issue of Elle UK, which featured a stunning shot of Chopra on the cover. "HBD!" he wrote, followed by, "Happy birthday sis! Love ya! Look it's you!"

And last, but certainly not least, Kevin Jonas' wife Danielle chimed in with yet another sweet birthday shout-out for her sister-in-law. "happy birthday @priyankachopra!" she wrote alongside a black-and-white pic of Chopra sitting on Nick's lap, while Danielle is sitting on Chopra's lap. "i hope your day is as bright and beautiful as you," she added. "love you!"

Clearly, there was no shortage of love for Chopra on her big day. She must feel super lucky for marrying into such a wonderful extended family — a family that takes time out of their busy days to make sure she feels special.