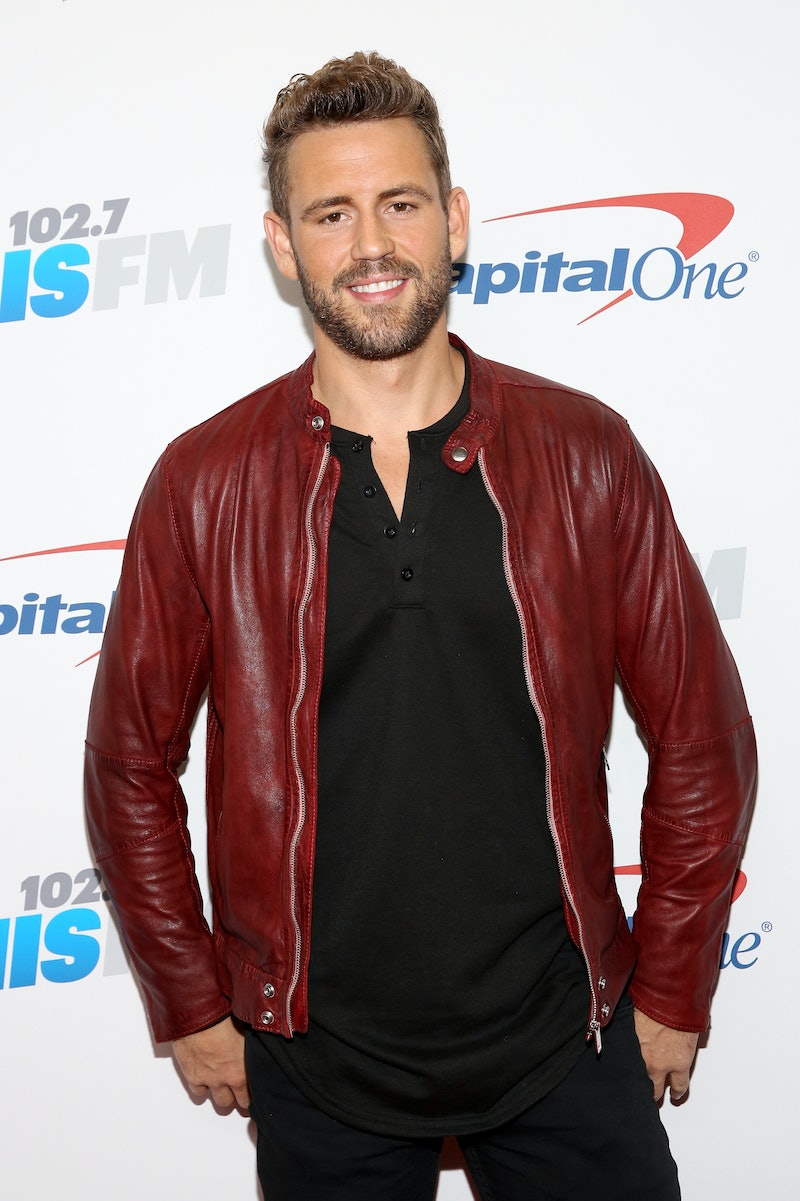 If the most recent Bachelorette and Tyler Cameron don't go the distance, one Bachelor Nation veteran has an idea. While watching Tuesday evening’s finale, Nick Viall proposed the next Bachelorette be Hannah Brown... again. “Hannah has my vote for first 2 time Bachelorette," tweeted the two-time Bachelorette contestant. Dude couldn’t even wait to see how her season of The Bachelorette wrapped up before he suggested she come back for another round, and hey, given how wonderful Hannah is, who can blame Nick?

Nick expanded upon this point when chatting with Tyler C. on the July 31 episode of The Viall Files podcast. He said,

"She was my favorite Bachelorette of all time ... Pure entertainment? She was so great. For all the people who gave her criticism at Colton's AFR, and you know, when she was so nervous, and again, even tonight on live TV, she was so poised and so articulate with Jed. Wonderfully gracious and sincere ... And you kinda see Hannah grow throughout the season. Props to her, she did a great job. She was a fantastic lead. You obviously were a big reason for that, but Hannah was certainly the queen of the season. She killed it. I would watch another season."

He would watch another season unless, of course, Hannah and Tyler C. were to become an item (again). On the final episode of Season 15, viewers saw Hannah reckon with Jed Wyatt’s sketchy relationship history, dump Jed, listen to Jed’s apology, reunite with runner-up Tyler C. on live TV, and ask Tyler C. out on a date. And duh, Tyler C. accepted her invitation. “I think we just need to be normal people," Hannah explained. "Let's have a drink."

Could that first “normal people” date be the start of a serious relationship? Sure, but for now, they are both technically single, and it sure sounds like they aren't raring to rush into anything. As Tyler C. said on the aforementioned episode of The Viall Files, "I value and cherish our relationship and our friendship, and that is not something I want to cut off cold turkey just because it didn't work out. She's someone I would hope to have a drink with and see what happens and take it one step at a time."

What do you know, it sounds like our Bachelor Nation heroine would not be opposed to the idea of giving The Bachelorette another go. As she said in this week’s People, “never say never!” Hannah also told the magazine that being the lead on The Bachelorette “was an experience unlike anything else.” She continued, “I learned so much about myself during this process and if I were to step into this position again, I’m sure I would learn more.” While she hasn't ruled it out entirely, she’s not quite ready to think about doing another season. “I’m always trying to grow and evolve, but to look that far down the road right now feels unfair to the attention my heart needs now while I heal,” she said.

On one hand, it would be awesome to see Hannah as the Bachelorette again. Her season was incredible, and it would be a delight to root for her for another round of episodes. On the other hand, if Hannah does become the Bachelorette again, that would mean the drink with Tyler C. did not lead to the enduring relationship many fans hoped for. And that would be a bummer. Hannah and Tyler C. seem like lovely people who genuinely enjoy each other’s company, and as Chris Harrison said on the After the Final Rose special, “We can ship this.” Oh, we can and we will.

And if Hannah feels another season of The Bachelorette is what's best for her? Right on. Look, it’s fun to see someone new to step into the lead role on The Bachelor/Bachelorette, but if the Hannah and Tyler C. situation does not blossom into a full-blown relationship, and if Hannah decides she’d be down to give Bachelor Nation another shot? Bring on the Beast.