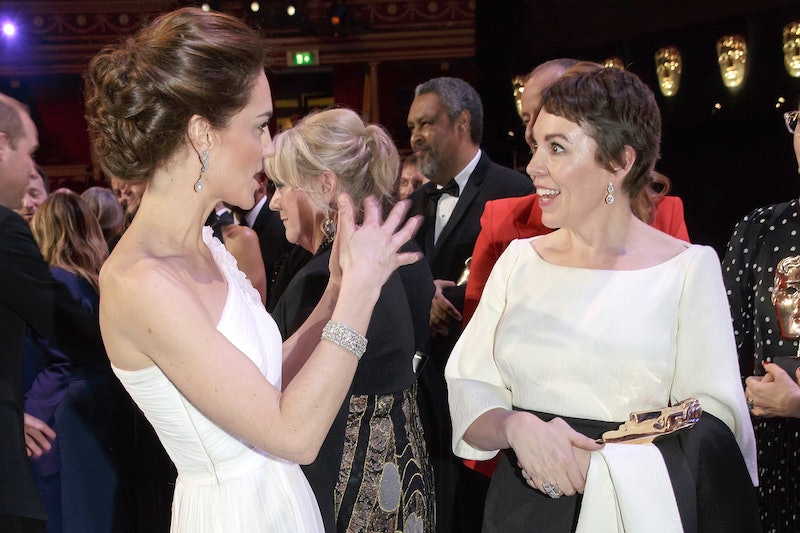 Being starstruck is a bit of a sliding scale. For those of us who have very little contact with media personalities or well-known faces, absolutely any minor celeb may make us blush. But that doesn't happen to A listers, right? They must be totally over it. Well guys, not necessarily, because Olivia Colman description of meeting Kate and Will proves that she's absolutely one of us when it comes to things like this.

Ugh, just when we thought this woman couldn't get any more endearing and cool, she reveals that she gets totally starstruck like any of us would. Speaking to Vogue U.S., Colman revealed how her interactions with Kate and Will went down.

So, it all happened at the BAFTAs. Which I guess was nerve wracking enough for a multitude of reasons. Apart from the big event itself, all of the cameras, and the anticipation of maybe winning a huge away, there's the added pressure of... er... meeting someone whose nan you're playing on the telly.

Colman shared her unusual behaviour and, babe, we can do nothing but stan. The actor told Vogue:

"I got over-grinny and a bit nervous and was sort of introducing Prince William to everybody. I sort of tried to imagine how Claire would do it. But I'm not actually the queen and I'm not actually Claire Foy."

I guess if there's any way to deal with someone who needs no introduction, it's to introduce them to absolutely everyone, am I right?

Colman is no stranger to playing royal roles, having bagged herself a very well deserved Oscar for her portrayal of the eccentric Queen Anne in The Favourite. A monarch who found herself torn between two cousins, Sarah Churchill and Abigail Masham, who fought for her affection.

However, the experience of playing a long-dead royal in a somewhat fictionalised production is entirely different to playing one who is absolutely alive. Not only alive but still working diligently as the country's monarch. Colman is of course playing her maj in the latest season of The Crown, Netflix incredible hit drama about the British royal family.

Colman has taken over from Claire Foy who so excellently played the part in the first two seasons. Speaking to Entertainment Weekly about taking over the part in a show which already is such a smash hit, Colman shared that her reaction to getting the role was initially overwhelmed, saying:

"I was incredibly uncool about it. The producers went, 'So…' [I said,] 'Yes! Yes! I'm really excited! Thank you very much!' I loved the first two seasons."

She continued by saying how nervous she was in following up from Foy, who is, admittedly, a very tough act to follow. Colman said:

"It's horrendous. Everyone loves Claire Foy, so I have got the worst job in the world at the moment. You're saying all the worst things, thanks!"

The third season of the show has been long anticipated, with fans eager to see not only stunning costumes, but a stellar cast made up of the likes of Helen Bonham Carter, Tobias Menzies, and of course the queen herself, Colman.