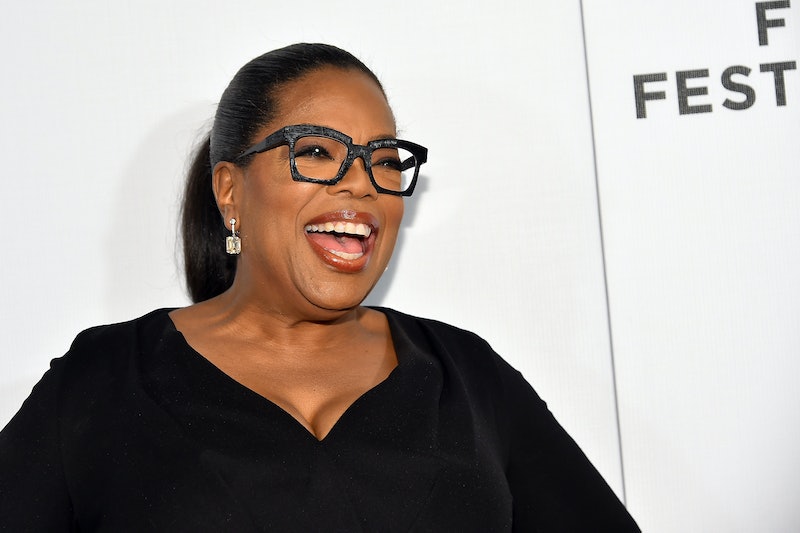 Oprah Winfrey is pretty much the greatest when it comes to leading by example, and this story about the time the media maven put her money where her mouth is certainly reaffirms this. In a recent interview, Oprah opened up about fighting for equal pay, specifically the time she threatened to quit her show if her female staffers weren't given a raise — showing everyone what a true ally looks like.

In her interview for TIME's Firsts series, Oprah explained,

“I built this show around myself and the producers. We were young women in our 30s trying to figure it out and find our own way. I was making a lot of money, and my producers were still getting the same salary. I went to my boss at the time and I said, ‘Everybody needs a raise.’ And he said, ‘Why?’ He actually said to me, ‘They’re only girls. They’re a bunch of girls. What do they need more money for?’”

What Oprah's then-boss apparently didn't realize was that she was not one to back down from this fight. Being the face of The Oprah Winfrey Show, Oprah knew that this privilege also came with a great responsibility to ensure everyone working with her was respected and placed on the same playing field.

And so, she selflessly put her once-in-a-lifetime opportunity on the line to see that it happened. "The Titan," as she was appropriately dubbed by TIME, continued,

"I go, ‘Well, either they’re gonna get raises, or I’m gonna sit down. I will not work unless they get paid.’ And so they did."

It's hard to believe that Oprah's fight almost 20 years ago is still one that women and people of color are still battling with today, isn't it? And her story can teach everyone a thing or two about what it takes to be a true ally.

Though helpful, being a partner in the fight against inequality — whether it be the defending of DACA, the battle to close the pay gap for women and people of color, or supporting #BlackLivesMatter — takes a lot more than posting supportive messages online. Instead, using your privilege to support disenfranchised groups can directly affect positive change.

In Oprah's situation, though she's a part of a couple disenfranchised groups herself — being black, a woman, and growing up in a low-income environment — her career positioning allotted her the privilege to affect change for lower-level employees in the workplace. Instead of using that privilege to positively impact her own predicament, Oprah applied it to those producers and crew members who didn't have the same leverage to ask for the pay they felt they deserved. And that gesture quite possibly helped to set the standard for equality on the set throughout the duration of her show.

Throughout the recent retelling of her workplace victory, Oprah also emphasized change just doesn't happen overnight. In fact, it takes a village and multiple acts of service. As she said, "Not one thing ever does it. It [takes] a series of consistent things that people say, 'ah ha. It's time for change." And hard work and dedication from everyone is required to make positive change a reality.

More like this
Beyoncé & Madonna’s “Break My Soul” Remix Honors A Group Of Black Icons
By Stephanie Topacio Long
Gassed Up Promises All Things Action, Risk, & Redemption
By Frances Stewart
'Indian Matchmaking's Arshneel Is Keeping His Potential Courtship With Rinkle Private
By Radhika Menon
Ellen DeGeneres, James Tupper, & More Celebs React To Anne Heche’s Death
By Brad Witter
Get Even More From Bustle — Sign Up For The Newsletter