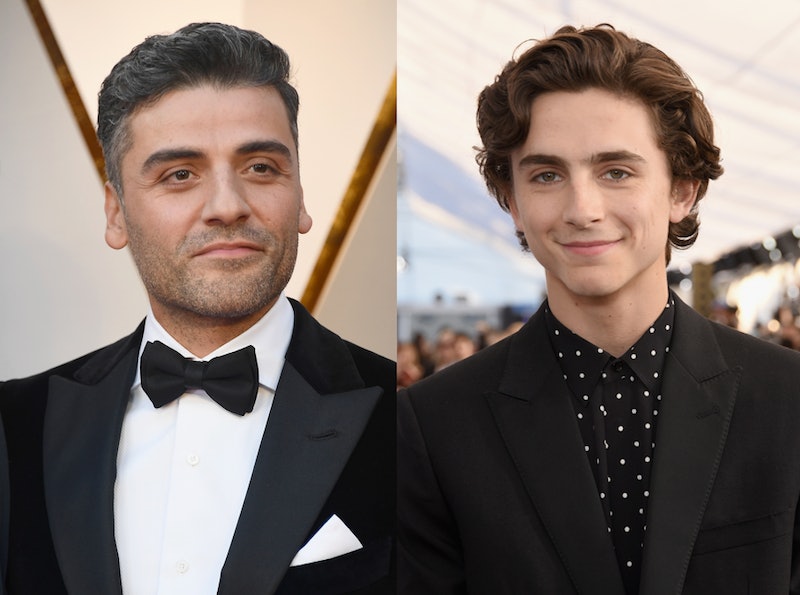 Some movie casting combinations are so exceptional, so beautiful, so enchanting, that they seem to be plucked straight from fans' imaginations. That's how the world was feeling when it was announced on Jan. 29 that Oscar Isaac could star in Dune with Timothée Chalamet. According to The Hollywood Reporter, the Star Wars actor is in early negotiations for the part of Duke Leto Atreides, father to Chalamet's lead character Paul Atreides. Isaac and Chalamet in any project together is enough to break the internet, but the combo is even more bizarrely enticing since Isaac would portray Chalamet's dad. And although you may not have considered this pairing in your wildest dreams, the world just makes sense now.

The 56-year-old Steve Carrell most recently filled the role of father to the 23-year-old Chalamet in Beautiful Boy. So the 39-year-old Isaac taking on this paternal part is a bit unexpected. But Chalamet's character Paul is only 15 years old in the Frank Herbert novel that Dune is based on. So with a little movie magic, should Isaac take the part, their age difference would be a non-issue. Dune is also a science fiction story set in the far future, so you'll need to utilize a suspension of disbelief anyway — and with a 16-year gap, it's not like it's totally implausible that Isaac could be Chalamet's dad. Plus, who's even going to be thinking of that once these two beloved actors take the screen together?

In David Lynch's 1984 film version of Dune, Kyle MacLachlan portrayed Paul with German actor Jürgen Prochnow playing Duke Leto. They only have an 18-year age difference, so it's not like the director of the new Dune, Denis Villeneuve (Arrival, Blade Runner 2049), is breaking the mold in that aspect. And, with the casting of two of the Internet's most beloved boyfriends, many fans seemed more than willing to celebrate the glorious casting news without getting bogged down by age differences.

The Father-Son Aspect Is Too Magnificent

Just the mere thought of the very-attractive Isaac portraying the father of the very-attractive Chalamet has got people worked up. Like one person tweeted, you'll want to channel Adam Levine in the "She Will Be Loved" music video and have an affair with both the parent and their spawn. But everybody chill since both Isaac and Chalamet are currently taken.

What Will Become Of The Internet?

While some people think the casting will be the death of them, others believe it's really the world of social media that will be destroyed since two of the internet's top boyfriends are joining forces. To quote Isaac's other sci-fi franchise, "May the force be with you."

It's All In The Hair

If for some unfathomable reason you're still struggling to get on board with Isaac as Chalamet's dad, just think about their matching dark locks. As one fan noted, the desert planet of Arrakis better not mess with their hair. But maybe the dry heat will just ensure their curls don't get too frizzy.

Even Book Readers Are On Board

Not everyone envisioned Isaac in the role, but even OG fans think this is very good casting.

Isaac and Chalamet will make literary nerds of us all!

Most Importantly: Will Isaac Have A Pug?

Duke Leto had a pug in Lynch's version. If Villeneuve adds a dog into the mix, the world really may end due to cuteness overload.

Even with this exciting casting news, you'll have to wait some time before the movie comes out. But clearly, Isaac and Chalamet in Dune will absolutely be worth the wait.