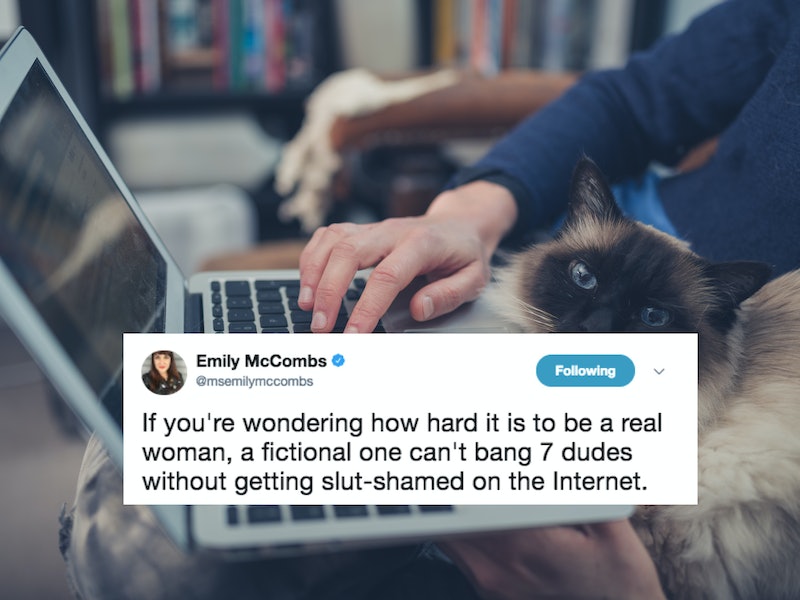 The Kristen Roupenian short story “Cat Person” has received an astonishing array of responses since its recent publication on The New Yorker’s website, from women sharing their own real-life “Cat Person” stories to frank and valuable discussions on bad sex. What I honestly wasn’t expecting, however — although, at the same time, perhaps I really should have expected it — is the number of people who have slut-shamed Margot in “Cat Person” as a direct response to the story. Somewhat depressingly, a tweet from Huffington Post editor Emily McCombs nailed exactly why I probably should have expected this sort of response: “If you're wondering how hard it is to be a real woman,” McCombs tweeted on Thursday, “a fictional one can't bang 7 dudes without getting slut-shamed on the Internet.”

Cue the heaviest of sighs.

McCombs’ tweet calls out a specific instance of slut-shaming: A piece called “Dear Cat-Person Girl” published on Dec. 13 by the National Review. And, indeed, that piece exemplifies this particular “take” on the story — one that tells Margot all the things she did wrong during her time with Robert, and subsequently why the bad sex and the final string of verbally abusive text messages she received from him are all her fault. To be fair, this is the National Review we’re talking about here; the fact that this kind of response to “Cat Person” was published over there is by no means surprising. But it is still expressly a bad take — and, in fact, rather a number of responses to it have pointed out in no uncertain terms that it’s a bad take. A few favorites:

But the fact remains that a sizeable number of responses to “Cat Person” have been along the lines of the NR piece — and, as encouraging as the counter-replies to it have been, that’s troubling.

Formatted as an open letter to Margot — who, again, is a fictional character, even if her experiences mirror those of many real-life people — “Dear Cat-Person Girl” opens with a brief summary of the story and a description of some of the sympathetic reactions to it. It even expresses some sympathy itself, reading, “I’m sorry about what happened to you Margot.”

“But I don’t think you have thought through how you got into a terrible situation,” it says.

“Robert is your seventh sexual partner. You’re 20 years old. Margot, I don’t know what the right number is for you, but seven is too many.”

Which is immediately followed up with:

Upon reading those four sentences, my jaw, quite literally, dropped.

It is shocking enough that the first three sentences assume not only that there is a “right” or “wrong” number of people to have sex with, but also that a person might be able to determine what that number is for someone else; indeed, these are two of the very things the sex positive movement has spent so long trying to dismantle: The idea that there is such a thing as a “right” or “wrong” number (or, even, that your “number” matters at all), and the assumption that other people are allowed to determine how many partners someone else is “allowed” to have. It should be a simple concept to grasp — it basically amounts to the phrase, “You’re not the boss of me,” placed within a context which means, “You are not me, and therefore you do not get to make the decisions for me that you think that I, an adult independent of you, should be making” — and yet, we are constantly reminded that in our slut-shaming culture that it is not. It is, in fact, the hardest concept for so many people to grasp.

Which brings us to that fourth sentence: “Please don’t mistake my concern for ‘slut-shaming.’”

The reason I was so surprised by this sentence that I did an actual spit-take (reminder: do not attempt to consume any sort of beverage or food item when reading something from a source with which you never agree) is because telling someone, “You’ve had sex with too many people” is the definition of slut-shaming. Literally — according to the Oxford Dictionaries, slut-shaming is “the action or fact of stigmatizing a woman for engaging in behavior judged to be promiscuous or sexually provocative.”

This contradiction in terms characterizes the entire piece. The sentence following the proclamation about slut-shaming reads, “I don’t think you’re a bad or immoral person”; then, the piece proceeds to make moral judgments about Margot left and right: She drank too much; she did it in the company of someone she didn’t know very well; she had sex with that person after too few dates. It is concern trolling of the highest order — a leveling of criticism at Margot for choices she made couched in an air of, “Oh, honey, I’m just pointing it all out because I care.”

What’s more — as the @mencatperson Twitter account underlined during its brief yet shining existence — the NR’s piece is by no means the only take on “Cat Person” that slut-shames Margot and subsequently misses one of the biggest points of the story. The view is pervasive: “Cat Person. Summary. Judgemental [sic], egotistical girl hooks up with guy that she finds physically unattractive. They have sex before they have established any emotional connection. Unsurprisingly the loveless act is sad and depressing. Cat(s)= Red Herring(s),” reads one tweet. “Some guys are bad at kissing, and bad at relationships. Having sex very soon after meeting someone is usually not a good life decision imo,” reads another. “On a broader note, the focus on successful sexual liaison destroyed what could have been a good friendship,” reads yet another. And, “Is 4,000 words really necessary to say that a woman met an insecure jerk, didn’t like that the sex didn’t matchup [sic] with her fantasy, ended it poorly with the guy, & then was surprised when he was upset,” reads one more.

These tweets, with their brevity, do not put much of the fault at Robert’s feet. The negative language refers primarily to Margot — she is “judgmental” and “egotistical” — and the fact that the sex is bad is because she, specifically, didn’t give the relationship enough time to develop. Even in the instance where Robert is judged in similarly negative terms — he’s a “jerk” — the fault for the sex being bad is implied to be Margot’s: She’s the subject of the phrase, “didn’t like that the sex didn’t matchup with her fantasy.” What’s more, in this tweet, Robert’s final texts to Margot paint him as being “upset,” rather than abusive. But make no bones about it: That quick turnaround from “Hope you’re well!” to “Whore” is abuse, not just being “upset.” You can be upset without calling someone names.

It’s true that Margot is not particularly likable. She’s fat-phobic and conflict-averse, and she has a tendency to want to construct people as she wishes they were, rather than how they really are. She’s probably not someone I’d want to hang out with or befriend.

But she doesn’t have to be likable. What she does have to be — and what she is — is very real. That’s one of the things that makes the story so effective. Many of us have been Margot at some point in our lives: Worried about our appearance, and about how we look next to someone else; unsure of how to extricate ourselves from a situation in which we no longer wish to be; vain and young and judgmental and any number of qualities that are not, we will hopefully later learn, kind. They are not kind to ourselves, and they are not kind to others.

They are, however, at least in part a product of how our culture treats women, sexuality, and gender. Women are socialized to worry about our appearance, because our culture has taught us that our worth is determined in large part by how we look. We are socialized to worry about how we look next to someone else because who we’re seen around is an extension of how we ourselves look—and, again, we are taught that our worth is tied up with our appearance. We are often unsure of how to extricate ourselves from a situation in which we no longer wish to be, because we’re socialized to be pleasant at all costs, and since we’ve already said “Yes,” it would be rude to turn around say “No” now.

Slut-shaming does not address these issues. It compounds them. And, indeed, as Emily McCombs noted, it’s a testament to how terribly our culture treats women that “a fictional one can’t bang 7 dudes without getting slut-shamed on the Internet.”

I have no doubt that these slut-shaming “takes” will continue, both in response to “Cat Person” and in response to anything else in that same vein that comes after it. But if “Cat Person” demonstrated one thing, it’s that these kinds of stories resonate, and there is a demand for stories written by women, for women. And when these kinds of stories are more prevalent — and when a wider range of these stories are more prevalent — then, perhaps by dint of simply being part of our daily landscape, the slut-shaming will taper. Or, at the very least, perhaps it will be drowned out by more robust discussions and takes — ones like Ella Dawson’s address of bad sex as “the sex we don’t want, but have anyway,” or what Katherine Roupenian herself points out about “the strange and flimsy evidence we use to judge the contextless people we meet outside our existing social networks, whether online or off.”

There is more to this story — more to all our stories — than just, “You have too much sex.” And my hope is that, one day, our discourse about our stories and ourselves will include everything there is to talk about.