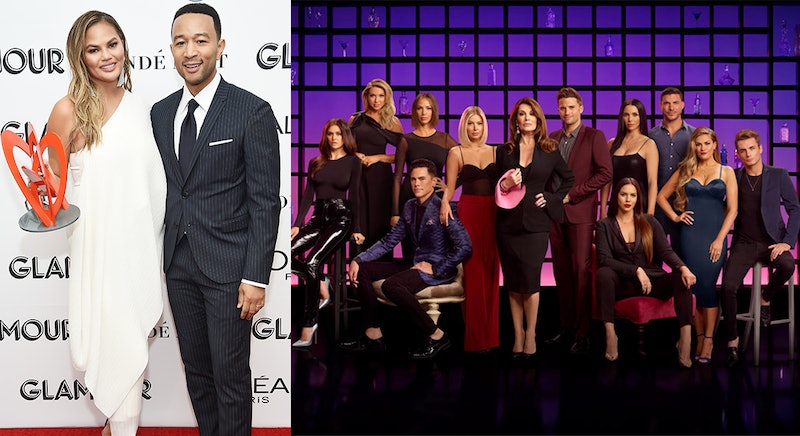 We now have visual confirmation of who will represent Vanderpump Rules on Celebrity Family Feud. Reality star and restauranteur Lisa Vanderpump shared a behind-the-scenes photo of the Vanderpump Rules vs. Chrissy Teigen and John Legend episode of Celebrity Family Feud. On Sunday, Feb. 17 (aka the day the Teigen-Legend family feuded about Totino’s), Teigen, Legend, and some members of the Pump Rules roster got together to play the Feud. The following day, the owner of Vanderpump Dogs let us know via photograph that her team is made up of Vander-stars Katie Maloney, Tom Schwartz, Ariana Madix, Tom Sandoval, and Puffy/Harrison/Prince Harry the Pomeranian. It really is all happening.

...OK yeah, when Sandoval was on SiriusXM's Radio Andy last week, he did spill that he and his co-stars would be facing Teigen and Legend on Feud, and he revealed who had been picked for the Pump Rules team, so it's not like LVP's picture was the most revelatory piece of content of all time. But it is still important!

News of the Pump Rules and Teigen-Legend mashup gained major momentum last Friday evening when Teigen tweeted that she's going to share the small screen with some folks from the Pump Rules cast. She wrote, “breaking: john and I are taping family feud against the cast of F*CKING @PUMPRULES Sunday!!!!” She also shared that their team will include her mom, her sister, and Legend’s brother.

Minutes later, Ariana quoted Teigen’s tweet, adding “MY FAVORITE SHOW WITH MY FAVORITE PEOPLE.” Oh, and she punctuated the tweet with five coffin emojis, because this is a five coffin emoji occasion. Katie also reposted Teigen’s announcement, writing, “I’m so friggin excited!!!!!!” Raise your Totino's Pizza Roll with a slice of fresh tomato on top high, these are the best days of our lives.

After the taping, Teigen posted a picture and wrote, “I can’t say if we won or lost family feud but we definitely brought a flask, I definitely chipped a tooth and there was definitely a record set.” Aside from the chipped tooth situation, it sounds like the Teigen-Legend vs. Pump Rules edition of Celebrity Family Feud was quite the Sexy Unique Success. Because of course it was.

You probably know that, in addition to being a bestselling cookbook author and hilarious Twitter personality, Teigen is a diehard Bravo fan. You also may know that, in addition to being an EGOT winner and meme icon, Legend is also very into Bravo programs, too. And you've probably heard once or twice that one of the couple's favorites just so happens to be Pump Rules. And they are really into The Real Housewives of Beverly Hills spin-off.

Celebrity Family Feud Season 5 will premiere on ABC this summer, and it feels safe to assume the Pump vs. Teigen-Legend episode will air on ABC at some point this summer. Block out your calendar accordingly.