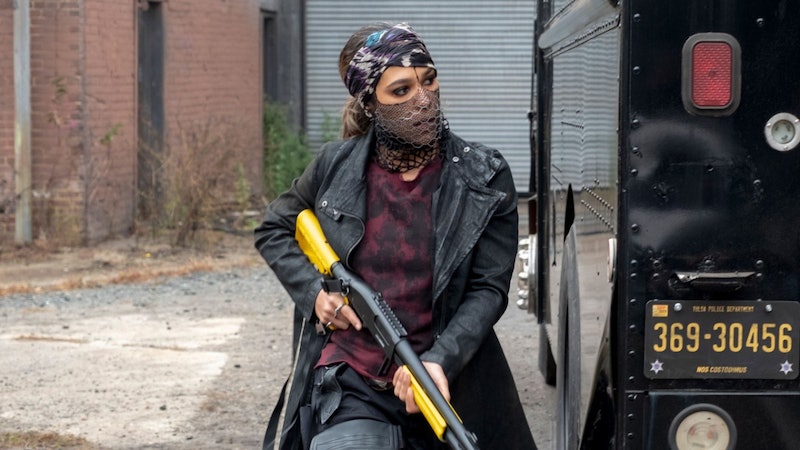 Damon Lindelof's Watchmen centers around several new characters who weren't in Alan Moore and Dave Gibbons' original comic, and one of them is the rough and tough Pirate Jenny. Played by Latina actor Jessica Camacho, Pirate Jenny in Watchmen is one of Detective Angela Abar's masked coworkers, and she's pretty determined to take down the white supremacist group the Seventh Kavalry — even if it means resorting to actions of police brutality. Pirate Jenny isn't in the Watchmen comic, but she does serve as a reference to them: she's an encapsulation of both righteous indignation and the danger of going too far in pursuit of justice.

We only see Pirate Jenny a few times around the precinct: most notably when the police are meeting about the hanging of Chief Judd Crawford, and later when they're rounding up everyone in Nixonville for questioning. Early reports described her character as an "anarchist" and an "androgynous, lustful bisexual cop," but her most defining characteristic is shown to be her dedication in helping Angela take down the Seventh Kavalry, at all costs.

This is a reference to the comic in several ways. One, Pirate Jenny's name draws from Tales of the Black Freighter, a fictional comic that a young man reads during the course of the Watchmen comic that parallels what's happening in the main story, particularly in regards to Ozymandias. Black Freighter tells the story of a mariner who's racing to beat a ghostly pirate ship heading for his hometown, but in his desperation to save everyone, he resorts to increasingly dehumanizing and evil acts. By the time he gets there, he's no longer a good man. In the end, he kills everyone he was supposed to save, and then waits at the port so he can join the pirates when they arrive.

Black Freighter is obviously about Ozymandias losing his soul when he decided (long before the Watchmen comic began) that the only way to avert World War III was to fake an alien squid attack on New York City that killed three million people. But it can also be seen as a reference to the complicated nature of Pirate Jenny and the police force now wearing masks in the show. In the last episode, Laurie Blake/Silk Spectre says to Angela, "You know how you can tell the difference between a masked cop and a vigilante? Me neither."

In a series deeply concerned with how the Ku Klux Klan has infiltrated politics and the police force, what does it mean to hide your face while wearing a badge? What soul-rending dangers arise when someone is capable of both great violence and has the total anonymity to do so?

Just as Angela's story explores the nuances of being both a Black woman and a cop though, so too does Pirate Jenny's story have more hidden depths. "Pirate Jenny" is a song that inspired Black Freighter, from the 1932 The Threepenny Opera by Kurt Weill and Bertolt Brecht. In the play, the character Polly sings a song of female vengeance about Jenny, a poor, lowly maid who's mocked and mistreated by the townspeople. When a pirate ship, the Black Freighter, suddenly appears in their harbor, the people are terrified to learn that Jenny, the woman they've been abusing, is actually the pirate leader. Pirate Jenny's crew rounds up all the men of the town, and she has them all killed.

It's a shocking end, but it takes on a layered meaning when applied to the women of Watchmen, and particularly the women of color like Angela Abar and Pirate Jenny. Watchmen is a world dominated by mostly white, male villains — Ozymandias, the Seventh Kavalry, even the KKK-affiliated Chief Crawford — and Angela and Pirate Jenny's stories revolve around them trying to bring these men to justice. While Black Freighter on one hand cautions against losing one's soul in the pursuit of heroism, "Pirate Jenny" paradoxically tells these women to let loose, and to make sure the men who want to harm them suffer the consequences.

When you look at how Black Freighter speaks mostly to Ozymandias and the men and how "Pirate Jenny" is mostly for the women, it makes sense. Thematically, Watchmen is very much about the people who have historically been the oppressed flipping the script on their oppressors. It's no surprise that Nina Simone herself did a rendition of "Pirate Jenny," which adds all new meaning and context to the story of a devalued woman getting the respect she deserves.

It's not clear yet how this commentary will play out across the season, though. Does this mean we're in for an epic team-up between Angela, Pirate Jenny, and Laurie Blake against all the women who've hurt and wronged them? One can only hope.