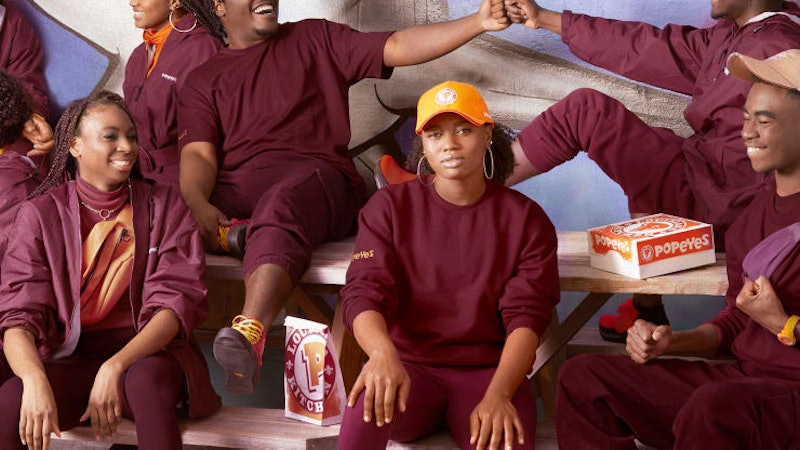 The year is 2020. Legions of disappointed fans are desperately searching planet earth (or just the internet) for any remaining scraps from Beyoncé’s highly anticipated Ivy Park relaunch in collaboration with adidas. Unsurprisingly, the first drop sold out instantly, and people are getting desperate for an orange box filled to the brim with Bey-approved maroon and orange activewear.

Enter Popeyes. Yes, you read that right — Popeyes. The team behind the chicken sandwich that broke Twitter is back with yet another groundbreaking invention: Ivy Park-inspired merchandise. One of the marketing geniuses on the fast food chain’s branding team must have realized the uncanny resemblance between Bey’s first collection with adidas and Popeyes uniforms, which boast a similar maroon and orange palette.

Now, everyone’s favorite fried chicken spot is also where you can buy some apparel that — from a distance, if you squint a little bit — kinda looks like it’s from the actual Ivy Park collection. Called “That Look From Popeyes,” the merch line is, in fact, just the uniform that Popeyes employees wear. There’s a hooded jacket, a crew neck T-shirt, a sweatshirt, a polo, a baseball cap, and more.

“I hope we never stop talking about Popeyes marketing team,” Twitter user Astasia Williams wrote. “THIS IS AMAZING. They did their own version of Ivy Park merch.”

And actress Reagan Gomez spoke the truth: “Popeyes knows who keeps the lights on and I’m not even mad.”

For the campaign imagery, several models styled their Popeyes gear with color-coordinating biker shorts á la Queen B. Two models wore knee-high maroon socks with matching heels — a look that might not be safe for working the register but it's definitely suitable for a night out with the girls.

According to CNBC, the models on the website are actual Popeyes employees. All of the merch will be available for a limited time only, and all proceeds from sales will support the Popeyes Foundation.

This isn’t the first time the Ivy Park collection garnered comparisons to company-issued garments. Last week, observant fans were quick to point out that the Ivy Park drop looks an awful lot like the uniforms worn by workers at Sainsbury’s, a British supermarket. Some fans couldn’t get over the similarities, so much so that they’re saying they physically cannot wear Beyoncé’s collection. One employee even offered herself up as the face of the Ivy Park x Sainsbury’s collaboration, should it ever actually come to fruition.

As for a potential Ivy Park x Popeyes collab down the road? Hey, it’s a new decade. Truly anything is possible.