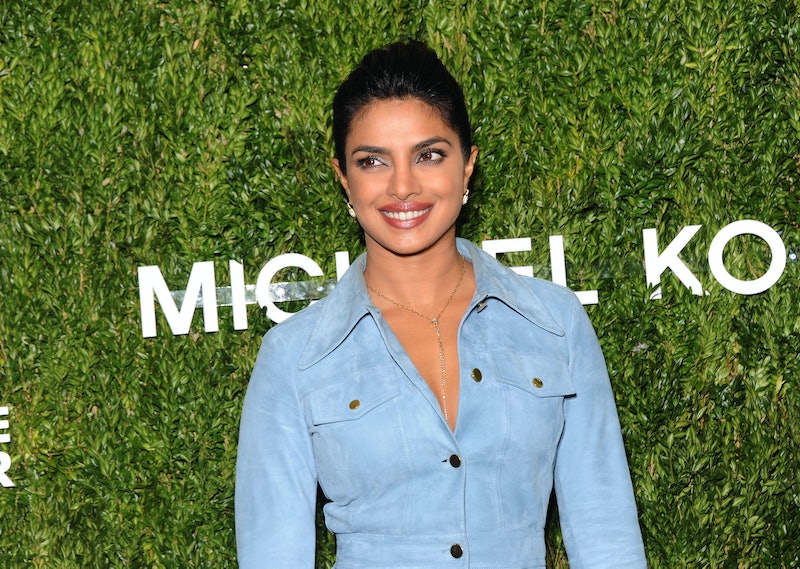 Here's one more reason to be a fan of the amazing Priyanka Chopra. On Friday, May 31, Chopra responded to rumors that she visited baby Archie by shutting down the reports via Twitter. Earlier this week, a report from The Sun claimed that the Quantico actor visited Meghan Markle and her newborn son Archie in London, and brought the baby gifts from Tiffany's in order to "mend" her supposedly broken friendship with the Duchess of Sussex. But the actor is making it clear that their friendship isn't in need of mending, and that she has no time for rumors.

Chopra tweeted, "While these are great gift ideas... this story is untrue, and I was actually in town for work. I hope whoever this "source" is starts checking their facts more often." The initial report claimed that the actor and Markle had a falling out after the Duchess couldn't attend her December wedding to Nick Jonas in India. However, she put that particular rumor to rest some time ago.

In March, Chopra appeared on Watch What Happens Live with Andy where host Andy Cohen told her that because she wasn't at the New York City baby shower for Markle, there were reports that the two were feuding over the Duchess not attending her wedding. Per People, the actor said, "Oh my god. No, it's not true."

And while it doesn't sound like she's met baby Archie in person yet, she did publicly congratulate her friend after his birth. She shared a screenshot of the official announcement from the Duke and Duchess of Sussex on Instagram along with the short, but sweet message: "Congratulations M & H" alongside a heart emoji.

Chopra and Markle have been friends since they met at Elle magazine's 2016 women in television event. And while they've both had a busy few months with weddings, the arrival of a new baby, and plenty of work obligations, they've always been supportive of one another. Chopra attended Markle's May 2018 wedding to Prince Harry, and after the ceremony, she shared a heartfelt tribute to her friend on Instagram.

"Every once in a while there is a moment when time stands still...that happened today," Chopra wrote. "You my friend were the epitome of grace, love, and beauty. Every choice made at this wedding by you both will go down in history, not just because it was your wedding, but because this incredible wedding stood for change and hope...both things that the world needs desperately. Thank you for being the perfect picture of all things good. Seeing your union and love blessed in front of my eyes made me so happy...and tear up! I wish you both love happiness and togetherness always."

Given how busy Chopra and Markle are, it's entirely understandable that the actor hasn't had a chance to visit Archie just yet. Her lack of a visit certainly doesn't imply a feud, and seeing her speak up to clarify false reports only shows how committed Chopra is to not allowing rumors to define her or her friendship with Markle.