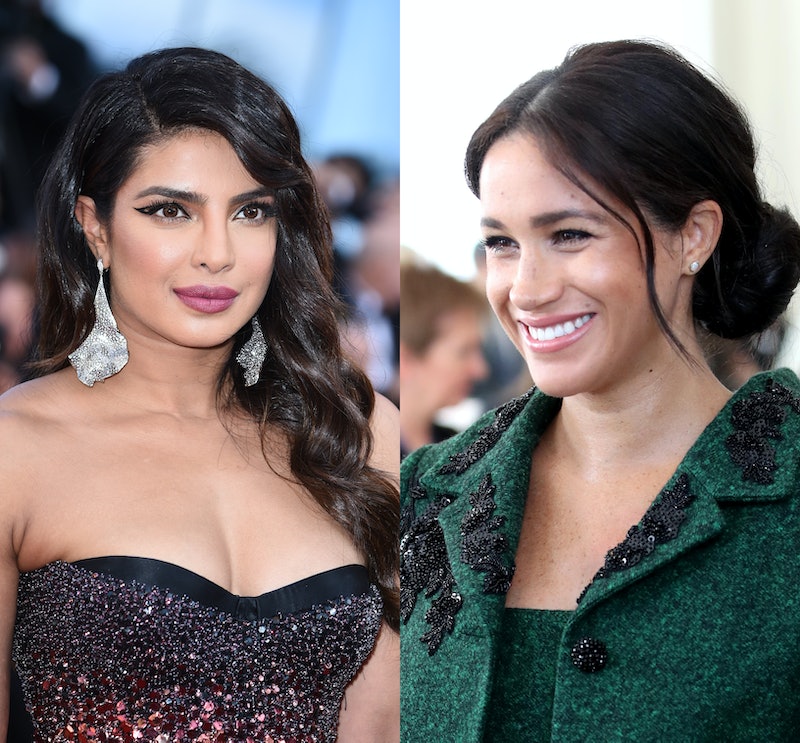 Even duchesses need a close girlfriend to defend them from time to time. Priyanka Chopra's comments about the media's treatment of Meghan Markle in a new interview with U.K.'s Sunday Times show just how committed she is to having her best friend's back. Chopra expressed her belief that racism was at the root of some of the negative coverage of Markle, as she spoke about knowing the Duchess of Sussex both before and after she joined the royal family.

Unforgiving headlines and an emphasis on reported diva-like behavior have plagued the Duchess of Sussex since the beginning of her relationship with Prince Harry. In fact, Harry released a statement about offensive racial remarks made about his then-girlfriend in November 2016 at the start of their relationship. "I've seen that and it's really unfortunate," Chopra said about the media coverage of Markle. "But if there's anyone who can handle it, it's her." When Chopra, who has been close friends with Markle since meeting at a 2016 ELLE Women in Television event, was asked if the press' treatment was due to an unwillingness to accept a biracial royal, the actor responded:

"For sure, 100%. Of course it has to do with racism, it’s an obvious reason. But the beauty of Meg is that she's been herself through all of this. A lot of people got to know her after everything [once she started dating Harry], but I knew her before and she's the same chick. Now that she's got a real platform, she talks about the same things she always did. We spent hours speaking about the difference that influence and dialogue can make to the world before this whole thing happened, so what you see now is authentically her. She's always been the girl wanting to move the needle."

Chopra has supported Markle during every step of her royal journey. The Quantico star attended the royal wedding in May 2018 alongside another one of Markle's friends from her days acting, Grey's Anatomy actor Abigail Spencer. More recently, she shut down rumors of any feud between herself and the Duchess of Sussex on Friday, May 31.

After The Sun reported that Chopra and husband Nick Jonas met Markle and Harry's new baby Archie, complete with extravagant Tiffany's gifts to repair their supposedly broken friendship, Chopra quickly shut down the rumors on Twitter. "While these are great gift ideas... this story is untrue, and I was actually in town for work," Chopra tweeted, retweeting the original article. "I hope whoever this 'source' is starts checking their facts more often."

However, Chopra did send congratulatory words to the Duke and Duchess of Sussex shortly after the birth of Archie on May 6, 2019. She posted a screenshot of the official announcement on Instagram along with the message: "Congratulations M & H" next to a heart emoji.

Clearly, Chopra and Markle's bond is one built to last. She shared with The Sunday Times more about the origin of her friendship with the former Suits star. "We just connected on how we see the world and as girls," she said, telling the outlet about her time spent hanging out in Canada with Markle while they both filmed their TV series.

"Meghan is such a progressive, modern girl," Chopra added. "She's what the world is today — a self-made woman who looks like each one of us. I mean, she's stunning," she laughed, “but she is so completely herself."

We stan a friendship that endures through royal protocol, media rumors, and thousands of miles. Hopefully, a new Markle and Chopra sighting is on the horizon.