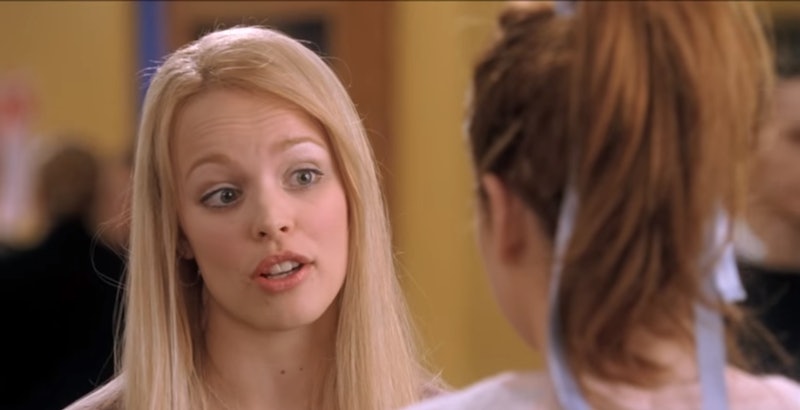 Sometimes, playing bad pays off. In a recent interview with the New York Times, Rachel McAdams's credits Mean Girls for her career success. McAdams' career was just getting started when she landed the role of Regina George. When Mean Girls premiered in 2004, Regina became something of a cultural icon, which isn't always a good thing for an actor if they don't want to be pigeonholed. However, for McAdams, Regina was just the beginning of a career full of a wide variety of characters across all film genres.

McAdams explained to the Times,

"Does Regina George haunt me every day? She does have that quality. No, I have to thank Regina George for giving me some longevity. I’m forever grateful to Tina Fey [the 'Mean Girls' screenwriter] and Mark Waters [the director]. I remember when I read it, I called my agent right away and said, 'I will play any part in this, please, please, please.'"

The actor's gambit paid off, because she's been working steadily ever since. After Mean Girls, McAdams appeared in another instant classic, The Notebook — this time as a romantic leading lady. From there she moved on to blockbusters like Robert Downey, Jr.'s Sherlock Holmes films and Doctor Strange, and her Oscar-nominated role in Spotlight. She even ventured into TV with HBO's True Detective, proving that there doesn't appear to be anything that McAdams can't do. Does Regina deserve all the credit? Not when McAdams has made a conscious decision to defy Hollywood's attempts to put her in a tidy box.

McAdams is acutely aware that the Hollywood machine runs on actors who stick to one genre or type of character. However, she's never been interested in playing that game. In fact, she revealed to the Times that taking her most recent role in the ensemble comedy Game Night was in part about accepting new challenges as an actor who isn't always comfortable in purely comedic roles. "You have to intentionally shake it up sometimes," McAdams told the paper.

That's a sentiment a queen bee like Regina would surely appreciate. While Mean Girls signaled to Hollywood that McAdams had arrived, the actor hasn't played many villains since then — but she may love being bad the most. The actor explained to the Times,

"I'm always looking for larger-than-life characters, which is probably why I like playing villains. They get away with so much."

It's no wonder that McAdams doesn't mind the ongoing appreciation she gets for starring in Mean Girls. She's had her share of amazing roles since then, but Regina and Mean Girls are a continuous part of the pop culture conversation. And while the actor admitted to the Times that it sometimes feels like a day doesn't go by without someone mentioning Regina to her, kicking off her career with such a deliciously over-the-top character also gave the industry an idea of exactly what McAdams was capable of.

Landing the role of Regina may also have given McAdams the courage to go after the roles she wants the most. Remember, before Mean Girls came out, McAdams only had a few credits to her name, including The Hot Chick. But McAdams knew she wanted to be in Mean Girls, and she put herself out there for the role. That's a philosophy she hasn't given up on.

In her interview, McAdams discussed the feeling that she has to prove herself in order to get the roles she wants. She said,

"I'm a neurotic actress, so I still feel that way. [laughs] I don't know that that ever fully goes away. And then if you do prove yourself, you feel like in the next one, you have to prove yourself even more."

That determination and drive is part of what made Regina such a riveting character, and those qualities have certainly led to McAdams becoming one of Hollywood's most versatile actors.

More like this
Amanda Seyfried Says She Felt Pressured To Shoot Nude Scenes At 19 Years Old
By Jake Viswanath
Taylor Swift Wanted To Be In 'Twilight: New Moon,' According To Its Director
By Grace Wehniainen
Jennifer Coolidge Just Said The Most Controversial Thing About Legally Blonde’s “Bend & Snap”
By Maxine Harrison
Before 'Bullet Train,' Revisit These Brad Pitt 'Fight Club' Premiere Photos From 1999
By Grace Wehniainen
Get Even More From Bustle — Sign Up For The Newsletter