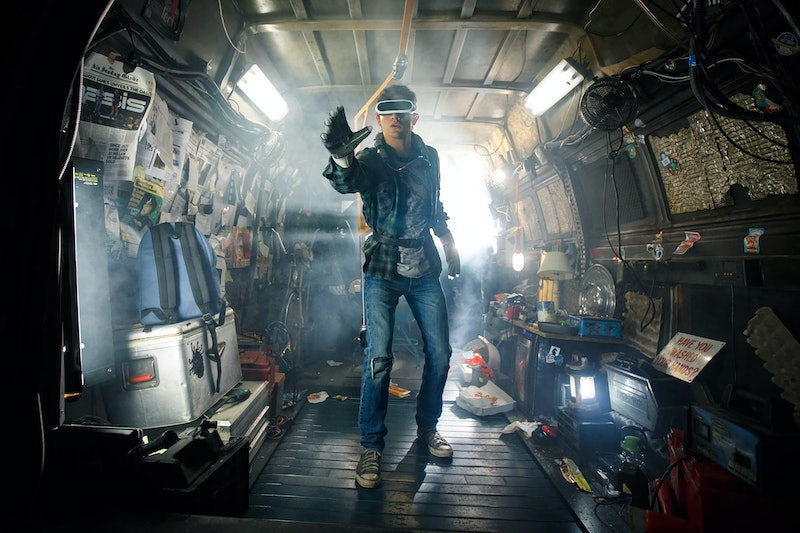 Set in a dystopian future, Steven Spielberg's new film Ready Player One depicts a world in which fandom is critical — just not revered, but necessary to survival. Human interaction and the development of meaningful relationships depend on a wide-ranging knowledge of '80s popular culture, and all of those relationships are made in a virtual world online. Unfortunately, just because the movie is set in 2044 doesn't mean that today's toxic fanboy culture has evolved. But instead of calling this out for the problem it is, the movie celebrates it; despite featuring a relatively inclusive cast, Ready Player One glorifies the white fanboy at the expense of female fans everywhere.

To understand how Ready Player One prioritizes white boy fandom, one first has to understand the plot. Spoilers ahead. The movie follows Wade (Tye Sheridan), a young white man in his late teens or early 20s whose only respite from the poverty and abuse waiting for him at home is the OASIS, a virtual world created by a socially awkward but brilliant programer and gamer named Halliday (Mark Rylance). The world is its own little virtual galaxy, one where everybody on Earth goes to escape and to live. It's there, in a world of endless possibilities, where people spend money, make money, and socializes.

Wade, though, isn't like everybody else. He's not there to have fun and meet people, but for one very specific quest. After Halliday's death, it was announced that he had hidden three challenges within the OASIS, and the first person to beat the challenges and collect three keys would become the sole proprietor of the OASIS, with the power to do anything with the framework and game. Wade is part of a subset of fans, called "Gunters," who are desperate to win Halliday's challenge. But to do that, one needs more than just gaming skills. The real key to victory comes from Halliday himself — every single memory and obsession he had that is held in virtual archives specifically to help players along their way. In other words: gaming is just half the battle, the other half is knowing every little thing about Halliday's life and the pop culture he loved in the '80s.

Halliday, a white man, loved, well, pretty much what you'd expect from a white man in that decade. There's Back to the Future, John Hughes movies, old video games, Duran Duran, "Video Killed The Radio Star." Halliday's affinity for '80s culture does not include Michael Jackson (who does earn one shoutout in the film), or Madonna, or Beverly Hills Cop. In other words: no women or people of color. Granted, Wade, as his OASIS alter-ego Parzival, loves pop culture beyond the stark whiteness of Halliday's preference. But, that doesn't change the fact that the very game he is competing in, the Halliday challenge to win the OASIS, depends entirely on one white man's love and knowledge of another white man's fandom.

After using his obsessive knowledge of Halliday to beat the first challenge and get the first key, Wade attracts the attention of a female Gunter, Art3mis (Olivia Cooke). She's known as the most skilled Gunter around — so, of course, Wade has a massive crush on her. Art3mis reluctantly teams up with Wade and his virtual friends Aech, Sho, and Daito, but their success in the game makes them targets of the large corporation I.O.I., which is desperate to own OASIS so it can commercialize it to its heart's content. This is where the film starts going over to the dark side of male fandom.

In the movie's third act, when Wade's OASIS team finally meets up IRL, it is revealed to be quite diverse. Aech, a mechanical genius who presents as male in the game, is actually a black woman, played by Lena Waithe. Daito and Sho are East Asian men (a fact Wade already knew), and Art3mis is, indeed, a young woman. The team, later called the High Fives, represents many different faces of fandom, which is absolutely worth celebrating. But while the movie gets an A for effort when it comes to showcasing and embracing diversity in a fandom essentially created by white men, it fails to follow through. Ready Player One elevates Wade as the hero, the only gamer pure enough of intent and knowledgable of fandom and gaming to take them across the finish line and beat each of Halliday's challenges.

The only character who comes close to Wade's skills when it comes to Halliday is Art3mis (aka Samantha). When we first meet Art3mis, there is no question that she is a superior gamer. She's better, faster, and smarter than Wade, a veritable rock star among Gunters in the OASIS. But despite her obvious talents, she's cast aside, and she dismisses her own talents for seemingly no reason other than to elevate Wade's role as the one true hero.

This isn't only offensive, it's ridiculous. Wade barely proves himself, and yet, after recruiting him to the resistance against I.O.I. and meeting up in real life, ARt3mis allows herself to be caught by I.O.I.. She's put in indentured servitude because, as she tells Wade, he's the only one with the knowledge capable of beating the third and final Halliday challenge.

Wade's role as the only person deserving of beating the Halliday challenges and inheriting the OASIS is pure white boy fandom. It reinforces the narrow, purist, and dangerously exclusionary thinking of the Gamergate movement, which disguised itself as a push for "ethics in journalism" about video games, but in reality was a movement dedicated to dismissing the fandom of women gamers and their demand for equality and respectful representation. Gamergate played out viciously on social media, with many women in the industry and in the media receiving rape and death threats online. Some were even driven from their homes when their private information, including their addresses, was released to the public (i.e. doxxing).

For supporters of Gamergate, the movement represents a call back to the old, pure days of gaming, meaning when games were overwhelmingly made by white men for other white men. Watching Ready Player One, Gamergate fans will likely feel validated. In a virtual world filled with diverse players, it is the young, white man who is the only true champion, just as they have always suspected.

At the end of the day, the filmmakers behind Ready Player One are not responsible for how one sexist segment of fandom will embrace the film. However, the movie was not made in a vacuum. The belittling of Art3mis' skills as a gamer and a fan and the decision to deify Wade as the chosen one is insulting to female fandom, and in the context of Gamergate, it is also dangerous. And that's not something any of us should have to put up with anymore.