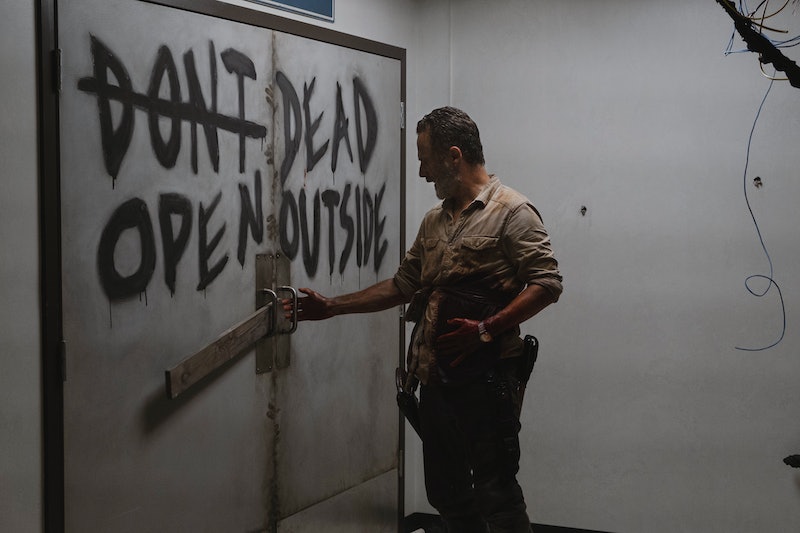 Spoilers for The Walking Dead Season 9 ahead. If you thought Rick Grimes' last episode of The Walking Dead wasn't going to involve metaphors, homages, and some sappy flashbacks — then you haven't been paying attention to this series. In fact, the big send off included Walking Dead Easter Eggs and callbacks to earlier seasons that celebrated Rick Grimes' heroic journey until the very end... even though this wasn't technically the end.

Did you catch all of the references to the pilot? First is the horse, of course (of course)! In the pilot episode, Rick rides a horse into Atlanta, after his quest to find gas for his cop car proves less than fruitful. That horse doesn't make it, but it is how Rick ends up meeting Glenn. The white horse that threw Rick in his penultimate episode and aids him in his personal finale is an homage to that. It also fits the "return to basics" theme of the season and the direction The Walking Dead is taking.

The episode started with Rick, who had just been impaled and was this close to becoming a walker snack, having a vision of himself from the start of the series — when he woke up in a hospital after being in a coma during the collapse of modern day society. From there, the references to his earlier episodes just keep coming.

Morgan Is Still By His Side

He hears Morgan saying "what is your wound," one of the first things Rick's buddy says to him when they first meet. But there are so many more references to take note of. Here are just a few of them.

A Memory Of Glenn

Rick calls himself an dumbass, like Glenn does when they first meet.

Later in the episode, the infamous "Don't Open Dead Inside" hospital graffiti reappears in another vision. Much like the pilot, he's primarily alone in the episode, solving problems using only his wits. The difference, of course, is that he has people to protect. He's not just looking for his family. He's looking to save them.

A Vision Of Shane

As Rick slips between life and death in his final episode, bring back more homages. First is Rick's former BFF Shane. They're sitting in front of the spot where Rick sustained the injury that put him in a coma. They talk about Judith.

Their conversation is directly referencing their first scene in pilot as well, right down to their greasy spoon takeout meals — which looks more like In and Out or Shake Shack than the burgers you'd get outside of Atlanta, but that's neither here nor there. Not only does Shane talk about his own death at the sheriff's hands, he references that time Rick bit out a dude's throat in Season 4.

His Conversation With Hershel

Rick also speaks to Hershel on the farm. "I'm so sorry for what happened to you," he says. That's referencing a line from the pilot as well. It was a moving conversation that the cast was lucky to have been able to film, given Scott Wilson's death in October 2018.

His vision with Sasha, however, feels more like a Molly Weasley from Harry Potter or Tony Stark from The Avengers reference, as Rick stands over all of his friends' corpses.

But No Visions Of Carl, Lori, Or Glenn

Seriously, a good editor could have made this happen with old clips, right? Consider it a major plot hole.

There's even a helicopter in the pilot! Check it out, below. How about that? From a 'copter you came, Sheriff Grimes, and to a 'copter you shall return. (At the end of the Season 9 episode, Rick is taken by helicopter to an undisclosed location.)

You've Heard This Song Before

What does all this say about the future for Rick (and Anne's) story? We won't know until the recently announced AMC original Walking Dead films come out, but it's certainly ominous. The series really got to have their walker cake and eat it too with this final episode, giving us hope for the future while saying goodbye to Rick Grimes and all that he's been through over nine seasons.