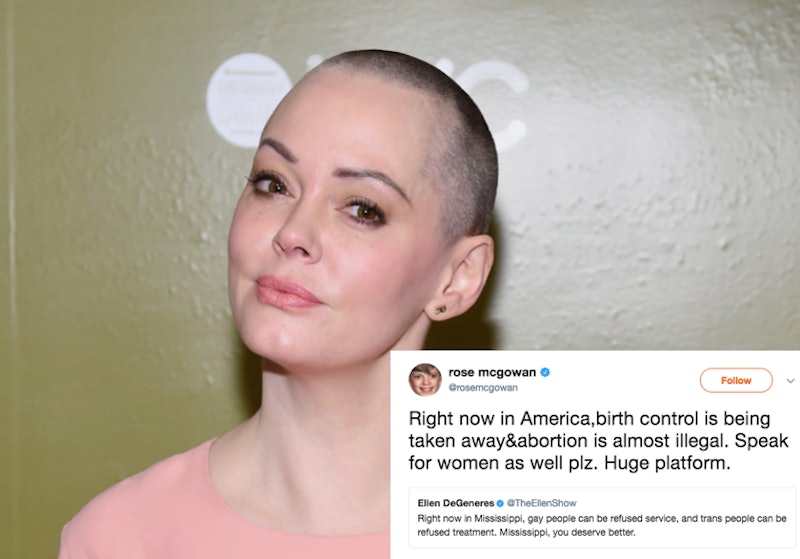 In the past week or so, Rose McGowan's radical Twitter feed has been leading a feminist rally against the seeming ubiquity of sexual assault and harassment in Hollywood. By all accounts, this has been a challenging time in which solidarity and unity has been a key component in sharing experiences and supporting an inclusive cross-section of women in doing so. However, on Wednesday, McGowan tweeted a response to Ellen DeGeneres that appeared to reprimand the beloved TV host for highlighting legal and civil rights issues against LGBTQ people in Mississippi. And the disappointing exchange is a prime example of why intersectional feminism is essential at all times.

In response to recent laws passed in the state in which LGBTQ+ individuals can be refused service and treatment due to "religious objections," DeGeneres tweeted, "Right now in Mississippi, gay people can be refused service, and trans people can be refused treatment. Mississippi, you deserve better." Unprovoked, McGowan then replied to the tweet and said, "Right now in America,birth control is being taken away&abortion is almost illegal. Speak for women as well plz. Huge platform."

For someone who has proven herself to be such a strong and powerful advocate for women's rights, it's incredibly disheartening to see McGowan undermining DeGeneres' message in this way. By requesting that DeGeneres "speak for women as well," the actor's statement feels, perhaps unintentionally, as if it's discrediting the lesbian and transgender experience as being as valid as that of heterosexual, cisgender women. Which, as any woman or non-binary individual who identifies as part of the LGBTQ+ community can attest, is a problem faced by lesbian and transgender women all the damn time.

What's also troubling about McGowan's statement, however, is the way in which the actor appears to compare the concerns of cisgender, heterosexual women with those of LGBTQ+ women. By reminding DeGeneres of the current fight for reproductive rights in response to a statement about gay and transgender rights, McGowan's statement comes off as sounding reductive and combative to the cause. It also stigmatizes the fight for gay and transgender rights as being less than important by comparison.

Regardless of how we all personally identify in terms of our gender or sexuality, it's important that our feminism incorporate the concerns of communities beyond our own. It's also important that we don't attempt to erase other people's experiences or speak over them when they have something important to say, just because we feel there's something more important happening that directly affects our own lives, specifically.

In speaking out so brazenly against Hollywood's unseen rape culture, and encouraging others to do the same, McGowan should be rightfully celebrated. But such activism feels hollow if it can't incorporate the LGBTQ+ experience alongside it — particularly when you consider, as Cameron Esposito pointed out on Twitter, that gay and transgender people are made more vulnerable to systemic acts of sexual harassment and violence when their basic human and legal rights are taken away from them.

It isn't the first time in the past week that McGowan has been involved in criticism concerning a lack of intersectional feminism. On Friday, she led a Twitter boycott in response to her suspension from the social media site. While McGowan faced tremendous public support for the boycott, the movement faced criticism for how the same level of support and outrage is rarely extended to women of color who also face bullying and harassment online.

Many Twitter users, for example, used the example of how ESPN commentator Jemele Hill was insulted by Donald Trump and forced to release an apology after she called the president a white supremacist in a personal tweet. Hill faced racial harassment online and was suspended from ESPN following the event, which by all accounts, was as worthy of a Twitter boycott as the movement led by McGowan.

As the past week-and-a-half has proven, we're all stronger when we stand together as a unit, not as individuals. And that's exactly what makes intersectional feminism so important, particularly as we move forward through such intensely difficult times. It doesn't just consider the needs and concerns of each woman as an individual, but considers us all as a whole, incorporating the many factors such as our race, class, sexuality, and health, that can further impact on our struggles as women. Hopefully McGowan will recognize this herself, and continue to learn, move forward, and strive to become a better feminist — just as we all do.