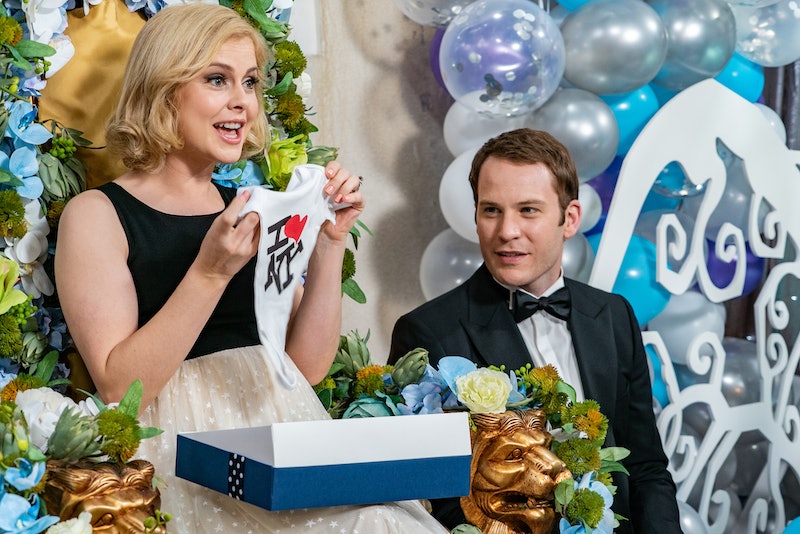 Netflix's A Christmas Prince trilogy has already given us so many things: questionable journalism, a royal wedding, and now, a baby. But, Rose McIver's A Christmas Prince 4 pitch hopes to bring therapy into the mix. The only problem is, she thinks it would take a Christmas miracle to get it made.

In an interview with Vulture for A Christmas Prince: The Royal Baby, McIver admitted that she's be "scared what would happen if we made a fourth one." But that doesn't mean the Queen Amber actor hasn't thought about what the fourquel could be. Though, she admits, she doesn't think Netflix will like her idea, which is "Royal Marriage Counseling." After having their bundle of joy, things will change for Aldovia's royal couple, McIver said, and it could cause them to go through some extra bumps in the road. "The realities of raising a toddler would be quite funny," McIver added.

Since McIver is good at her job, she managed to come up with a more uplifting spin on her pitch that could actually get green lit by Netflix. "A positive story about how we’re able to overcome a slump in a marriage by asking for help. It would be great," she said with a laugh.

In actuality, though, McIver said she thinks A Christmas Prince 4 will be about King Richard's (Ben Lamb) scene-stealing little sister. "What’s more likely," McIver said in regards to the next movie, "is something about Princess Emily and how she’s coming of age." That said, she noted, "should viewers demand it, there’s a lot of different ways the film could go." Case in point: A Christmas Prince: A Royal Baby is actually a cursed baby whodunit hybrid. In other words, the possibilities for the Christmas Prince series are endless.

While Netflix hasn't announced a fourquel, there are already signs that the over the top Christmas Prince saga isn't going to end anytime soon. The most obvious being that the internet's Christmas Prince obsession started at the same time the world was falling in love with Prince Harry, Duke of Sussex and Meghan, Duchess of Sussex. The movies are actually inspired by the real royal couple who has also gotten married and had a baby in the last few years.

So, when it comes to making another Christmas Prince, it might be worth taking a closer look at the lives of the Duke and Duchess of Sussex. If that doesn't spark any ideas, though, the first lady of Aldovia certainly has some thoughts on where A Christmas Prince 4 could go.

More like this
22 Movies On Netflix That Are Perfect For The Whole Family
By Bustle Editors
Here’s Everything Coming To & Leaving Netflix In August
By Jake Viswanath
What’s New On Netflix: 'Never Have I Ever' & 'Indian Matchmaking' Return
By Arya Roshanian
What’s New On Netflix: 'Bridget Jones’s Diary' & 'Monster-in-Law'
By Arya Roshanian
Get Even More From Bustle — Sign Up For The Newsletter