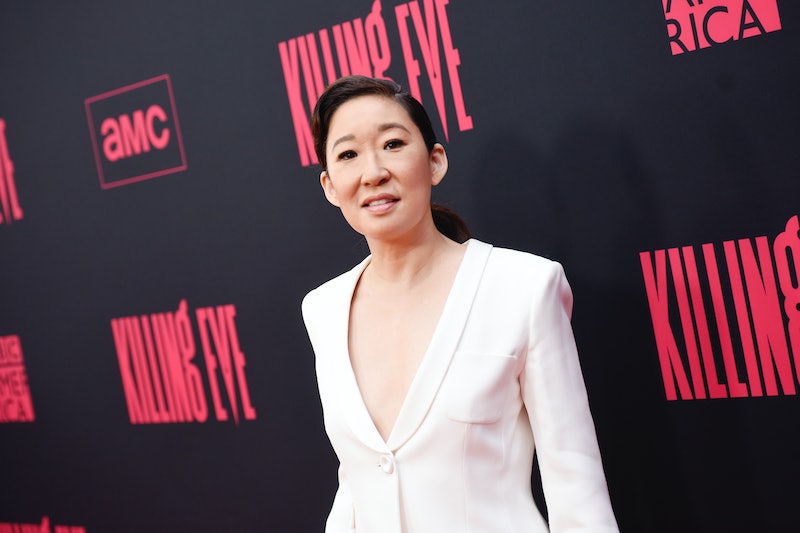 Well, it sure sounds like Dr. Cristina Yang will not be scrubbing in at Grey Sloan Memorial Hospital anytime soon. Or, like, ever again. Sandra Oh’s recent comments about returning to Grey’s Anatomy make two things extremely clear: she only has love for the character of Cristina Yang, but she is also set on keeping the character in her rearview. When Extra asked the Golden Globe winner at the Killing Eve Season 2 premiere if she would one day come back to Grey's, even for just a quick cameo, she replied,

“No. Creatively, you have moved on and I deeply appreciate it, because I can feel it from the fans, how much they love Cristina. For me, [Killing Eve] is my home now, this is where I am, I am Eve, and that's where I plan to stay as long as the show will have me."

Oh played Dr. Cristina Yang on Grey's Anatomy for 10 seasons, and she made her exit from the primetime soap opera in 2014. As much as fans miss the incredibly beloved character, they probably should not hold their breath for a role reprisal. Last March, Oh told Entertainment Weekly that she has “moved on” from her Grey’s part, but she is "not sure" if she'd ever go back. She explained,

“I will say it’s hard to beat that ending, because what I also realize is that it keeps it open in so many ways where you can continue on having that relationship with Cristina. I’m not sure. I guess I can’t really answer it either way where I’m sitting right now, because I’m so committed to Eve. The idea of stepping back into the Cristina shoes, it doesn’t feel right to me right now. But honestly, who knows how long Grey’s is gonna go."

A few months later, she addressed the topic again in an interview with TVLine. “I get [the Grey’s] question regularly, and I answer it really based on what I’m feeling that day, and today [my answer] is no." She wasn't kidding about getting that question regularly. (Hey, people sure do miss Dr. Yang!) According to Entertainment Weekly, when the subject came up in a 2017 interview with Access Hollywood Live, she said, “At this point… No, I don’t think so." And in 2016, Oh told Entertainment Tonight Canada that she has "no plans to return to Grey’s anytime soon.”

Though she isn't so keen on the idea of coming back to Grey's now, she has not always felt that way. In a 2014 interview with The Hollywood Reporter, Oh said that when she let Grey's Anatomy showrunner Shonda Rhimes know that she was moving on, they did discuss the possibility of Cristina coming back for the series finale. She continued,

"There are certain things that Shonda and I talk about once and then we leave it because we want things to happen without pressure. I told her, 'If you guys want to finish it out however you want to finish it out, I'd be more than happy to come back. And if it doesn't fit in that way, I totally understand. I just want you to know that I'm available.' Who knows! I might be doing something fabulous and it might not work out but I did say, 'Yes, of course I would.'"

Hey, Oh sure is doing something fabulous.