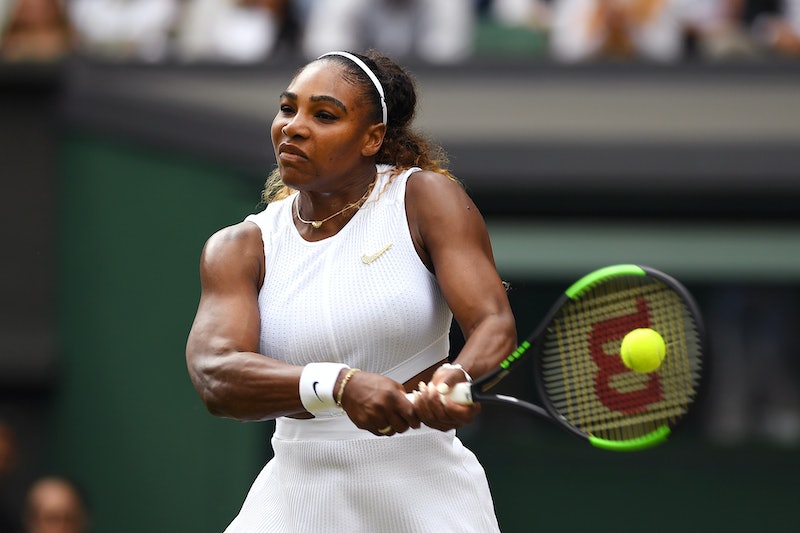 Serena Williams is saying, "Thank u, next," to her 2019 Wimbledon showing. A day after Williams' ladies’ singles championship loss to Romanian Simona Halep on July 13, the tennis star is proving her inspiring GOAT status. Instead of dwelling on her recent defeat, Williams' thoughts on Wimbledon 2019, via Instagram, are focused on the future.

Reflecting on a hard-fought tournament, the 23-time Grand Slam singles champ and owner of 39 Grand Slam titles overall, paid homage to her fierce competition in Halep, while also sharing her own takeaway. Williams captioned a photo of herself on the court, her left fist raised in the air, while her right hand clutched her racket:

Williams' commitment to "a step closer," could possibly refer to a battle for yet another record-breaking milestone. She's one Grand Slam title away from tying Margaret Court's record of 24. In the hours after her crushing loss, Williams held a press conference in which she named equality as a key ingredient to her not only taking on the record, but declaring a worthwhile career.

In the same interview, Williams referenced fellow tennis legend Billie Jean King's recent comments to Metro UK that her wish for the tennis star is for her to devote herself exclusively to tennis "for the next year-and-a-half." Williams' response was a major serve in and of itself. "Well, the day I stop fighting for equality and for people who look like you and me will be the day I'm in my grave," the Queen of the Court said. Later, King refuted earlier reports and tweeted that she "would never ask anyone to stop fighting for equality."

Clearly, Williams sense of pride over her craft hasn't waned after finishing second this year. And why should it? Wimbledon has been another eventful one for the high-profile athlete — on and off the court. At the start of the tournament in London, Williams posted a matching mother-daughter photo of herself with 1-year-old daughter Olympia. Both sported matching "S" for Serena sweaters while striking adorable poses, captioned, "Let the games begin!"

In the midst of taking on the likes of Barbora Strýcová in the semi-finals and U.S. player Alison Riske at quarters, Williams had a lot of celeb fans in her corner. Last week alone, Chrissy Teigen epically responded to men who think they could beat Williams on Twitter and two Duchesses cheered the tennis pro on in the finals. Yes, longtime bestie Meghan Markle made two appearances at Wimbledon. Her second was spent alongside sister-in-law Kate Middleton and the Duchess of Cambridge's sister, Pippa.

During a press conference mid-tournament, Williams even spoke to their bond when she said about Markle, "She couldn't be a better friend to me. Low moments, high moments, she's always there, and that's all I want to be to her."

For Williams, it's an enthusiastic ending to a twist-filled tournament.

More like this
The 2023 Super Bowl Commercials Feature A 'Breaking Bad' Reunion & Missy Elliott
By Alyssa Lapid
Twitter Is Shook As Tom Brady Holds Back Tears Announcing His 2nd Retirement
By Marina Watts
David Beckham’s Controversial Qatar Deal Skyrocketed His Net Worth
By Catharina Cheung
Vanessa Hudgens Is Reportedly Engaged To Cole Tucker
By Jake Viswanath
Get Even More From Bustle — Sign Up For The Newsletter
From hair trends to relationship advice, our daily newsletter has everything you need to sound like a person who’s on TikTok, even if you aren’t.