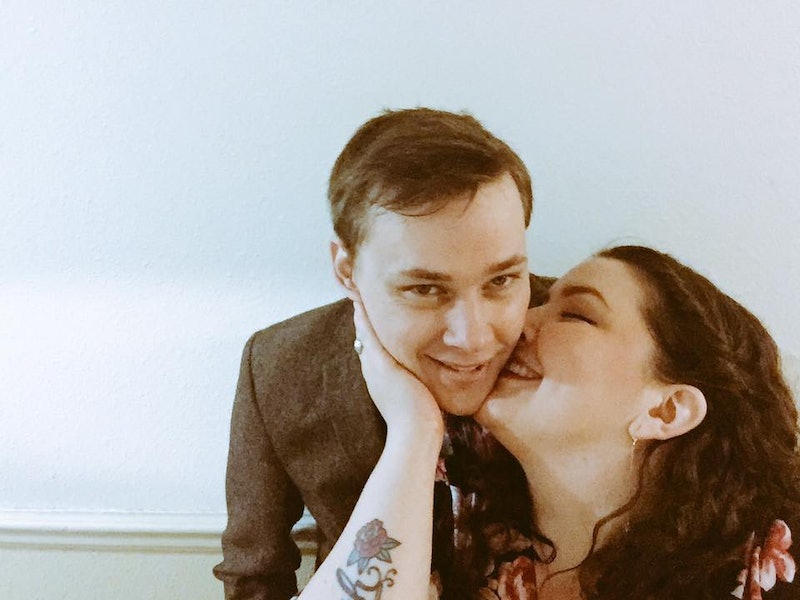 It was a Thursday evening in Santa Cruz, California when I arrived at Cafe Gratitude to meet the person I’d end up marrying. Ten minutes in, his blushing cheeks and persevering smile indicated that our exciting night was just getting started. I sent my previously-agreed-upon “I’m-probably-not-coming-home-tonight-and-he's-probably-not-a-serial-killer” text to my bestie.

The phone check-in safety measure was integral to my sex-positive dating lifestyle, and it gave me peace of mind: within 30 minutes, I'd shoot a text to someone (who knew exactly where I was) with one of three emojis, indicating, "good date and probably not coming home," "mediocre but safe," and "unsafe/please call or show up." It took away a lot of the very real fear about dating strangers, ensured my messages were from me (secret emoji language!), and because it was so quick, never interfered with my evening.

He was visibly flustered throughout our date, the ice in his water glass clinking as he trembled. After our meal had ended and the bill was signed, I leaned toward him from across the table.

“So what are you going to do with me now?”

Unsurprisingly, my bold move only contributed to his nerves, which was my intention. I was delighted by how overwhelmed he was by our date. I'd been reluctant, worried that he seemed like the monogamous commitment-type, and I was decidedly not. Eventually, I gave in because he was incredibly sweet, open, and though his blurry pictures had failed to represent him accurately, up-close he turned out to be a total babe.

I smiled. “That’s not what I meant, but we can do that first.”

Flirtatious and forward, yes, but expressing my intentions was important. By letting him know where I thought we were headed, it gave him the opportunity to speak up and tell me if he wasn't OK with how the night was unfolding.

For me, first date sex didn't necessarily equate to romantic commitment — though it did hold a commitment to honesty and openness — it was about doing what I, and my date, wanted to do. Every first date I had didn't end in sex, but with people I liked, and who liked me, why not? Being a sex-positive, safe young woman who trusted her instincts meant that I felt comfortable exploring sexuality with my dates. I also felt comfortable turning them down — even walking out — if they went in a direction I didn't like.

It would fit the trope to say that upon first banging I just knew he was the one, but the truth is, that revelation came a few dates later.

We talked about my work as a sex educator, we discussed kinks, and I distinctly remember him bringing up foreskin and his feelings about circumcision (he’s against it). It seemed that after a few rounds of questions and answers on both our parts, he was confident enough to bring up getting back to his place. We headed toward my car, and he clumsily reached for my hand. It was sweet and unexpected. He asked if it was OK, and I squeezed his hand back. It was definitely OK.

When we got back to his house, he stood in front of me as I sat on his bed, unbuckling his belt. We went over STI statuses, and he grabbed his latex condoms.

“Do you really think I’d show up without condoms I could actually use?” I mean, really. I’m a dildo-peddler! A lube fairy! A condom queen.

I stayed the night, though we did little sleeping. We didn’t cuddle, and not because we didn't like each other, but because sex and snuggling are two very different things. Initiating sex with someone, in my own experience, has always been about attraction. Cuddling ups the game from, "I think you're sexy and I want to get to know you" to, "I like you a lot, and I trust you." We weren't there yet.

While the sex was fun, it wasn't a love-at-first-sight kind of thing; we had an excellent time, we slept, and woke up only to get back to the festivities. It would fit the trope to say that upon first banging I just knew he was the one, but the truth is, that revelation came a few dates later.

The next day, he sent me a very polite text, letting me know he had a good time ... and that he had noticed what seemed to be a blemish near my mouth. He wanted to ask if I thought it was a cold sore. I was embarrassed but replied that no, it was just a zit. Even though I felt uncomfortable that he had walked away wondering about the STI risk of our encounter, I also felt relieved; he had checked in about his concerns.

I won’t say that hooking up on the first date is the reason I got married (if that were the case, I'd have quite a few divorces under my belt by now), but in my experience, it lead to building a seriously healthy, communicative, happy, and sexy relationship.

I thought about all the things we’d discussed on our date, and how we’d both used consent practices. When he initiated the first physical contact and asked if it was OK, when I asked what he planned to do with me; these gave us opportunities to express how we were feeling. Having all those exchanges with him set a high standard for our relationship from day one.

The next time we slept together, he asked if I wanted to cuddle afterward. I said I'd love to, and mentioned that no one ever had the same desire for the amount of cuddling I enjoyed. He said he felt exactly the same way.

We’ve been cuddling up pretty much every night for four years now, and our second wedding anniversary was in February. I won’t say that hooking up on the first date is the reason I got married (if that were the case, I'd have quite a few divorces under my belt by now), but in my experience, it lead to building a seriously healthy, communicative, happy, and sexy relationship.

Our first date, and the sex it included? They were part of my regular program. And why wouldn't they be? I knew what I liked, I enjoyed myself, and I was in the right mindset to be pursuing flings. If you'd asked me during my dating years if I felt like I was being responsible, safe, having fun, and doing what was best for myself, I'd have given you the same answer that I'd give you now, years later and married: HELL yes.

There's this extremist sort of view that either you're the kind of person who has sex on the first date, or you're a strict three-date rule kind of person, as if that dictates anything about who you really are as a person or a potential couple. In the end, it's the people involved who define the relationship, not when they choose to first take their clothes off. Whether you have sex on the first date or wait until "I do," it comes down to what makes you happy, what feels right in your relationship, and how your partner responds to your most honest self.

No matter when sex becomes part of courtship, what makes it good isn't the timing; it's having a respectful, communicative partner. Through hooking up so early on, I discovered that my partner was honest, open-minded, caring, and that — perhaps even way more importantly than all the sexier stuff — he had the same level of insatiability as me when it comes to cuddling.

More like this
Are Quality Time & Gift-Receiving Love Languages Compatible?
By Lexi Inks
10 Creative Sexting Ideas That Don't Involve Nudes
By Lexi Inks
The 19 Best Tweets & Memes About Bisexual Awareness Week
By Lexi Inks
These 4 Signs Are The Seductive Sirens Of The Zodiac
By Brittany Beringer
Get Even More From Bustle — Sign Up For The Newsletter