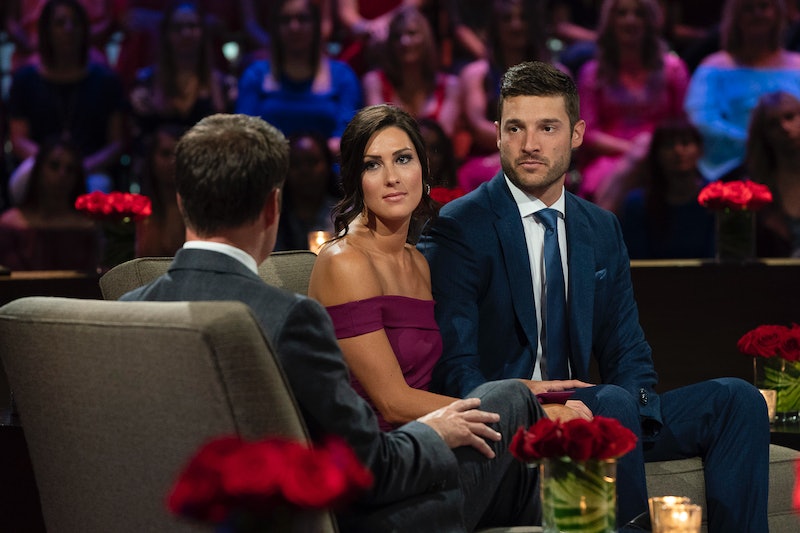 How much does social media behavior overlap with real-life behavior? That's exactly the question that a lot of Bachelorette fans have been asking, since Bachelorette Becca Kufrin responded to winner's Garrett Yrigoyen's controversial social media choices during the three-hour finale on Monday. Right after the season started airing, Yrigoyen liked a series of offensive posts, outraging many fans.

The posts he liked seemed to mock undocumented immigrants, as well as the trans community, feminists and Parkland, Florida, shooting survivor David Hogg. Though the fact that he had liked these posts came out not long after the season premiere, fans were left waiting until the finale to hear Kufrin's response. According to Hollywood Reporter, Kufrin said during the finale:

"The Instagram situation, I don't condone that and I know that he stands by his apology and he feels so bad for everyone that he did offend. He didn't mean it. But I just want to move forward, to learn and to grow and continue to educate ourselves. That's all that you can ask for in another person is that somebody who recognizes if they make a mistake and do something wrong and to want to learn and grow from it, and that's what he showed me."

But for many people, the point is a larger one — why would someone like those sorts of posts in the first place? What does that say about them as a person? It also leads to bigger questions about relationships generally. Should you break up with someone or not to date them because of how they behave online? Well, if you wouldn't like it if they did it in real life, it's hard to see why the fact that they did it online would be any different.

"If your date or partner starts posting things that are against your value system, continuing to date them would definitely be a problem."

"It depends what the bad social media behavior is," relationship therapist Aimee Hartstein, LCSW, tells Bustle. "But if your date or partner starts posting things that are against your value system, continuing to date them would definitely be a problem. Also, if your date or partner posts things that are obnoxious or inappropriate, it shows a level of poor judgement which would be another reason not to date them. Basically, if the things they do online would upset you or turn you off in real life, then you shouldn’t see them anymore." Many of us like to imagine that our online persona is separate from who we are as person, but experts say otherwise.

When Is Social Media Breakup-Worthy?

Even though there are some behaviors that are clearly out of bounds, it can sometimes be difficult to tell when bad behavior is too bad when it comes to social media.

"Social media behavior absolutely can mean that you should break up with someone," Susan Trombetti, matchmaker and the owner of Exclusive Matchmaking tells Bustle. "Not all social media activity that isn't desirable is breakup-worthy, but it is very revealing."

In addition to liking xenophobic, transphobic, and misogynistic posts, Trombetti points to other behaviors, like too many likes or too much stalking on an ex's page, liking anything that's cruel or meant to make someone feel bad about themselves for who they are, and stalking Instagram models. All of these are poor social media etiquette and, depending on the situation, potentially breakup-worthy. But no matter what, you should be taking your partner's (or potential partner's) social media behavior into account, rather than acting like it's separate from who they are. "It cannot be overlooked," Trombetti says.

Social media and the internet can feel like a different world, but it's still reflective of who we are. "Bad social media behavior is certainly cause for a breakup if it reveals something about the person's character," Damona Hoffman, Host of the Dates & Mates Podcast, tells Bustle. "Now more than ever, social media is an extension of our true beliefs, and seeing people's behavior, likes, dislikes, and comments online can help you get to know them better."

In fact, as Hoffman says, in a time where couples aren't exactly taking things slowly, it's one of the best ways to determine how someone will be in the long run. "[S]ocial media behavior is our best short-term indicator of the person someone will be long-term," she says.

As the experts say, pay attention to how someone you're dating or interested in behaves. What someone says or does can say a lot about their values, even if it's just through likes and shares. It's still them, after all.

More like this
Are Gemini & Scorpio Compatible In A Relationship?
By Kristine Fellizar
The Most Compatible Life Path Numbers, According To Numerologists
By Kristine Fellizar
Here’s How To Reignite The Spark In A Sexless Relationship
By Vanessa Marin
Here’s How To Deal With Sexual Frustration If You Don’t Want Casual Sex
By Annakeara Stinson and Mackenzie Sylvester
Get Even More From Bustle — Sign Up For The Newsletter