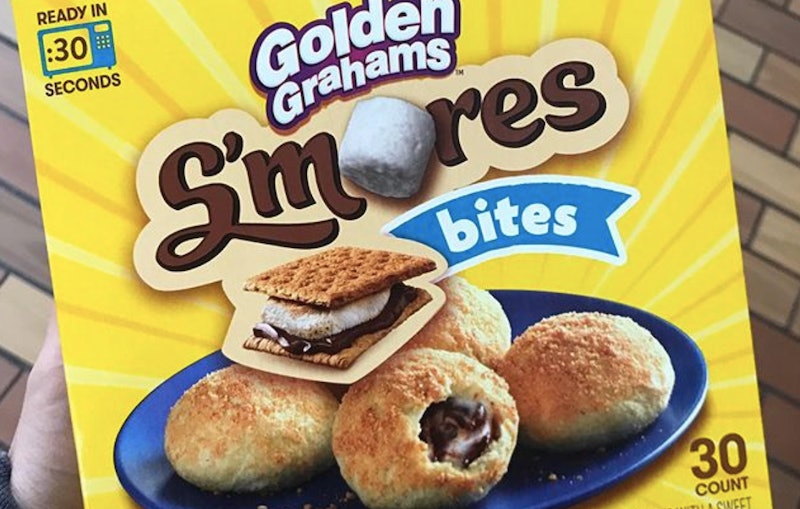 With the summer nights starting to wane, you may be worried about giving up your favorite parts of summer — good times on the beach with friends, after-work drinks in the sunshine, and, most importantly, eating your bodyweight in s’mores at every single barbecue you can find. Well, now you don’t have to fret — because thanks to Golden Grahams S’more Bites, you can enjoy your favorite treat-year round.

Instagrammer @theesnackateers spotted these delicious bundles of happiness at Woodman’s, so make sure to keep your eyes peeled. Golden Grahams, the graham cracker cereal, knows a thing or two about the most important parts of a s’more — so it’s clear that they were the right company for such a tasty new snack.

But what exactly are s'mores bites? Well, the more I learn, the more I like. “Soft donut bites with a sweet marshmallow and chocolate filling,” the description reads — so it’s a donut?! Yes. That makes me even happier.

Not only that, they’re meant to be served warm because, well, they’re s'mores. Just 30 seconds in the microwave will have you on the way to delicious, delicious bliss. They come in a pack of 30, which feels like an exciting and dangerous proposition — maybe even a challenge. It’s so good to know that if you don't have a bonfire or a bunch of sticks and camp fire songs laying around you can still get your s'mores fix — just a microwave away.

It’s not really a surprise to see it this year — because people have been going all-in with the chocolate/marshmallow/graham combinations in 2019. Not only are we seeing s’mores everywhere, we're seeing them in new shapes and sizes all the darn time.

People have been incorporating s’mores into their big day with wedding s'mores bars popping up all over the place — or they’ve taken a truly solo path with the Hershey's S'more Caddy that allows you to have all of the necessary s’mores ingredients with you at all times. Or, if you really want to enjoy sharing, then Aldi even released a S’mores Jumbo Kit that serves 16 people — or just one of me, depending on the day.

And it's not just s’mores themselves — there have been a whole lot of hot takes of the favorite. You can get S'mores Coffee Creamer to start your day off with a splash or you can get Target's S'mores Frosted Sugar Cookies to eat alone in your car while listening to the new Taylor Swift album. You can do whatever you want, s’mores-style.

If you've ever tried to make s'mores in the microwave, you'll know that it can be a pretty disappointing endeavor. The graham crackers go a little funny, things can burn, the marshmallows go rubbery and lack those sweet, sweet burned edges — or, in the case of one of my epic fails, you set everything on fire. But that's what makes the Golden Grahams S’more Bites so exciting. All of the s'mores deliciousness, wrapped in a donut — and designed to be made in a microwave, any time day or night. The future looks freakin' delish.