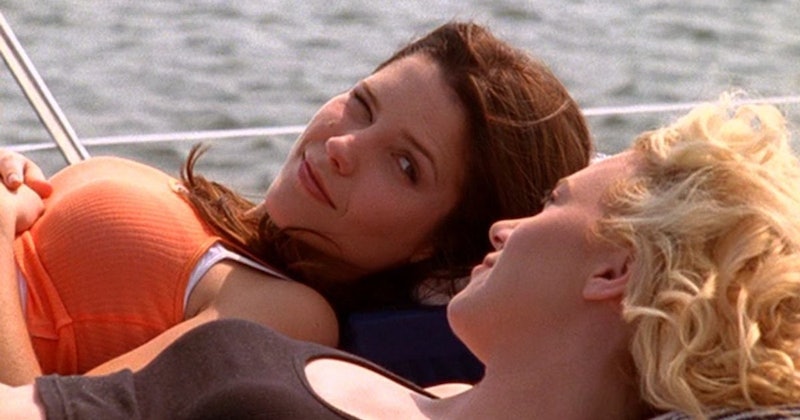 There are few certainties in this world, but one thing you can count on is that Brooke Davis and Peyton Sawyer are forever. On Saturday, Jan. 20, Sophia Bush and Hilarie Burton swapped Women's March messages that will warm your heart. The One Tree Hill stars have made it clear that they have stayed in touch through the years, but that doesn't make their latest Twitter exchange any less heartwarming. On a day that was all about empowering women to use their voices to support each other, Bush and Burton used social media to express their seemingly unwavering belief in one another.

Burton, who is expecting her second child with husband Jeffrey Dean Morgan, couldn't make it to any of the marches this year. However, that didn't stop her from sending lots of love and support to her friends who spent the day at rallies. Burton tweeted,

The Lethal Weapon actor also shared a picture with a Virginia Woolf quote that reads, "A feminist is any woman who tells the truth about her life." It's clear that even though she couldn't march this year, Burton was there in spirit, and no one knows that better than her longtime friend, Bush.

Bush responded to Burton with a message that's bound to make Brooke and Peyton fans a little bit teary. Bush tweeted to her pal,

"Love you sister! Marched for you and the little lady on the way too!"

The love between these two appears to remain fierce to this day. As Bush said in her tweet, she was not only marching for Burton, but also for Burton's soon to be born daughter. Brooke and Peyton would be so proud of these two.

Not only did Bush take the time to express her support for Burton, she also spoke at the Los Angeles Women's March where she commended the tireless work done by the black women who are guiding the movement. During her speech, Burton said,

As an activist, Bush devotes a great deal of her time advocating for women, combating hate, and generally being the kind of role model that everyone can root for. Bush's social activism and work ethic are just part of what makes her amazing. She's proven time and again that she's also an incredible friend. Nowhere is that more apparent than in the long-lasting bond between Bush and Burton.

Onscreen, Brooke and Peyton went through more than a few friendship dramas as they fought over boys and faced other high school squabbles. However, in real life, it seems that Bush and Burton have never once stopped having each other's backs. These two are such good friends that Burton's first ever tweet was sent to Bush. When she joined the site in May, Burton wrote,

"1st tweet HAS to be to thank this golden woman - for being my defender against imposters and my voice for years. Love you @SophiaBush !!!"

Forget BFF goals, Bush and Burton are a beautiful example of what it looks like when women truly support other women, whether that means marching in someone's honor or defending them on the internet. Brooke and Peyton were amazing, but Bush and Burton just keep on proving that their friendship is legendary.