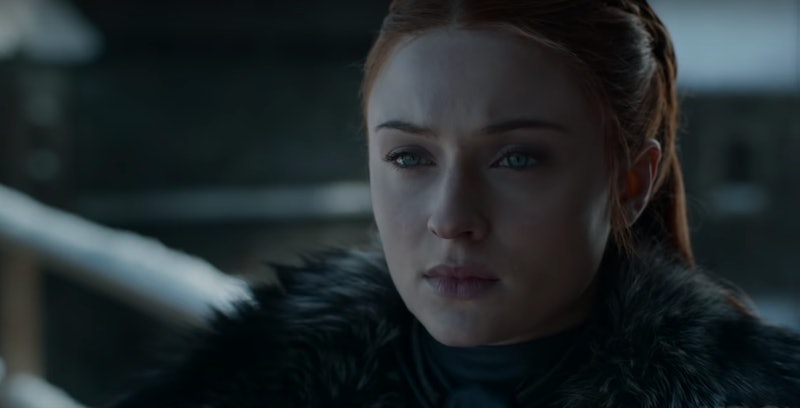 If the walls in Sansa Stark’s home could talk, they'd have a mighty big spoiler to share with the rest of the class. In Rolling Stone’s cover story on Sophie Turner and Maisie Williams, the actor who has played Sansa on Game of Thrones for eight seasons said her final day of filming was full of tears ("Because I cry at everything") and one very spoiler-ific storyboard. Turner's reaction to Game of Thrones ending and to the storyboard of Sansa's final scene that GoT showrunners David Benioff and D.B. Weiss gave her will leave you sobbing into your goblet of mead.

And that storyboard that maps out the end of Sansa's story? Oh, it is not currently locked up in a hidden safe on a remote island. Rather, that storyboard of Sansa's final scene is currently hanging up in Turner's house. And apparently nobody knows there’s a storyboard of Sansa’s final scene hanging up in her house (well, until now, that is). So uh, if you're pals with Turner but allergic to GoT spoilers, maybe steer clear of her place until the series finale airs.

Turner's talked about Benioff and Weiss handing out these sentimental parting gifts to the cast before. In a July 2018 interview with Digital Spy, Turner recounted Benioff and Weiss giving her a storyboard of "their favorite scene" of Sansa on her final day in Winterfell. She said,

“I wasn’t even shooting there, but the director, David Nutter, called me into the courtyard, because he knew it was my last day on set. He said to the whole crew, ‘Sansa Stark is leaving Winterfell for the last time.' As you can imagine, I bawled my eyes out. Then David and Dan presented each actor with their favorite scene of their character in a storyboard, with a little note on the back. That set me off as well. As soon as they brought that out… And the documentary crew saw me. It was just a nightmare, to be honest – I was just bawling.”

The storyboard came up again in October 2018 at a New York Comic Con panel hosted by Entertainment Weekly. According to Newsweek, Turner said,

"What David and Dan [Benioff and Weiss, the showrunners] do, they bring out a storyboard of their favorite scene for your character in all of Game of Thrones, and they write this really long note on the back. I just bawled my eyes out. I couldn't stop shaking and crying for hours. I still don't really accept that it's done. I think I won't accept that it's over until next year comes around and I'm not back in Belfast with my family. It's weird.”

And now we know Benioff and Weiss's favorite Sansa scene is Sansa's very last scene. I know Season 8 doesn't start until April 14, but is it too early to start weeping?

Without giving away how the whole kit and caboodle wraps up, Turner told Rolling Stone she’s “very satisfied with the ending of the entire show,” adding that every storyline “came to a really good close.” Williams noted that there are “a lot of similarities” between the first season and the final season, which is an observation she expanded on in a recent interview with Entertainment Weekly. “After reading the scripts I went back and watched season 1 again because so much of it refers back to that season,” Williams EW. “There are so many scenes that will look similar.” She also promised “a lot of death this year,” which feels about right.

We'll find out which characters die, who ultimately takes the Iron Throne, and what is on Sansa's storyboard when the final season of Game of Thrones premieres next month.