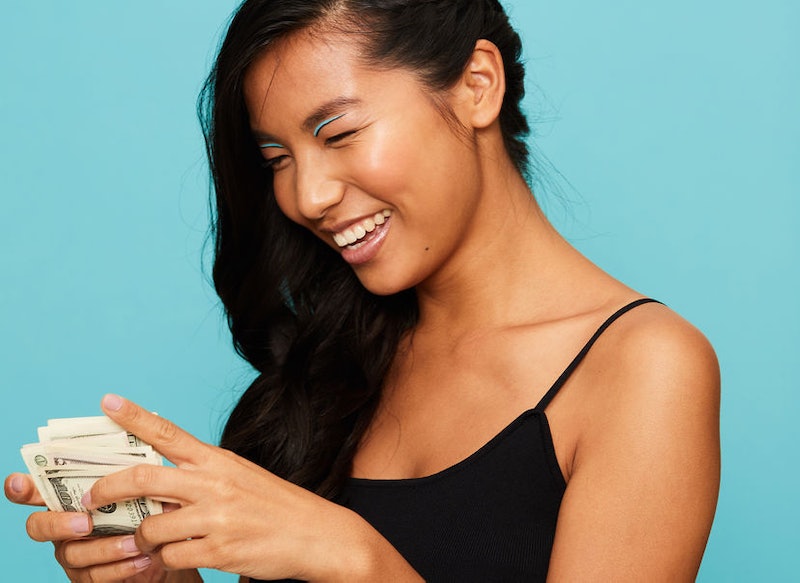 Pop-up museums, stores, and events are all the rage lately, and this new one hopes to accomplish what the others do — educate people in a fun environment for a limited amount of time. Only, it aims to promote financial independence among women in the U.S. It’s called Stacks House and the first one will be in L.A., then expand to other cities. The launch is planned for April 17, and since April is Financial Literacy Month and when we celebrate Equal Pay Day (April 2), it’s perfect timing.

The event will take place in Downtown LA’s arts district, where attendees can have a unique sensory experience among a series of themed rooms while taking on the often-taboo subject of money. Each room will be centered around key financial goals, such as earning more, saving, eliminating debt, and investing wisely. With participatory experiences like the Debt Boxing Gym — where you can let off some steam over your debt — to the Retirement Rodeo — where you can ride a mechanical pig while learning about compound interest — the pop-up hopes to combine useful information with empowering messages.

The startup was founded by with Farnoosh Torabi, Patience Ramsey, and Kindra Meyer; together, they have 45 combined years of experience in personal finance, experiential, marketing and brand-building. “Creating unforgettable, immersive activations is in our blood, as Patience and I are experiential marketing experts,” Meyer tells Bustle. “Taking the culturally relevant platform of pop-ups and pairing it with finance was an exciting prospect, because money is often an emotional, complicated topic.” She says they wanted to take something which is usually not seen as “fun” and create an experience which would excite, inspire, and ignite women across the nation to get their finances in order.

Stacks House was born from She Stacks, a new startup by women, for women, whose mission is to financially empower women through various content, products, and experiences, such as the pop-up.

“Like other pop-ups, Stacks House is a visual spectacle, sensory experience, and Instagram playground — but here, attendees will find more than just social shares,” Meyer tells Bustle. “They will also walk away with knowledge, inspiration, and actionable next steps on how to improve their financial lives — it is a pop-up with a purpose.”

"Female financial literacy is not just a women’s issue — it’s important for everybody. When women are financially literate, financially secure, and make more, the world becomes a better place.”

Tarobi, personal finance expert and host of podcast So Money, tells Bustle that women’s financial health is still lagging behind men’s. “On average, we earn less, save less, invest less, and are saddled with more student loans than men,” she says. “We also have a bit of a confidence gap to close, whether it’s when asking for a raise or requesting money back from friends.”

She says that according to Zelle, a service that lets you send money directly between bank accounts and also one of the four presenting sponsors of the event, 86 percent of women reported not being paid back after covering a shared expense, such as concert tickets or a meal for friends. Furthermore, 16 percent of women said this happens “all the time.” So, the need for financial literacy there. “And we believe that female financial literacy is not just a women’s issue — it’s important for everybody,” Ramsey says. “When women are financially literate, financially secure, and make more, the world becomes a better place.”

Both Ramsey and Meyer say they realized that in order for real change to happen in the post-2016 election world — where women’s rights were being threatened — women needed more power, and that money means power. “We decided to do something about it, founding She Stacks LLC in 2017, and began researching and ideating ways to empower and educate women,” Meyer says. They also began to look for a “financial goddess” to join them, which they found in Torabi.

“We have more transparency now over our economic realities and the impact of being financially fragile — women, in particular,” Torabi says. “When you’re not financially independent, it’s harder to achieve your goals, like starting a business or a family.” She says that it’s also incredibly difficult to feel like you cannot afford to leave a bad situation, whether it’s an abusive relationship or hostile workplace. “The Me Too and Times Up movements are making this abundantly clear,” she says. “All this — coupled with the fact that women are living longer (and all the while earning less than men) — compounds the immediate need to support women in their financial lives.”

After L.A., Stacks House will head to Detroit, Minneapolis, Austin, Chicago, and NYC, though the full schedule is not yet available. Stacks House will be open five days a week, Wednesday through Sunday, from April 17 through May 19. Tickets are $38 and can be purchased online at StacksHouse.com.