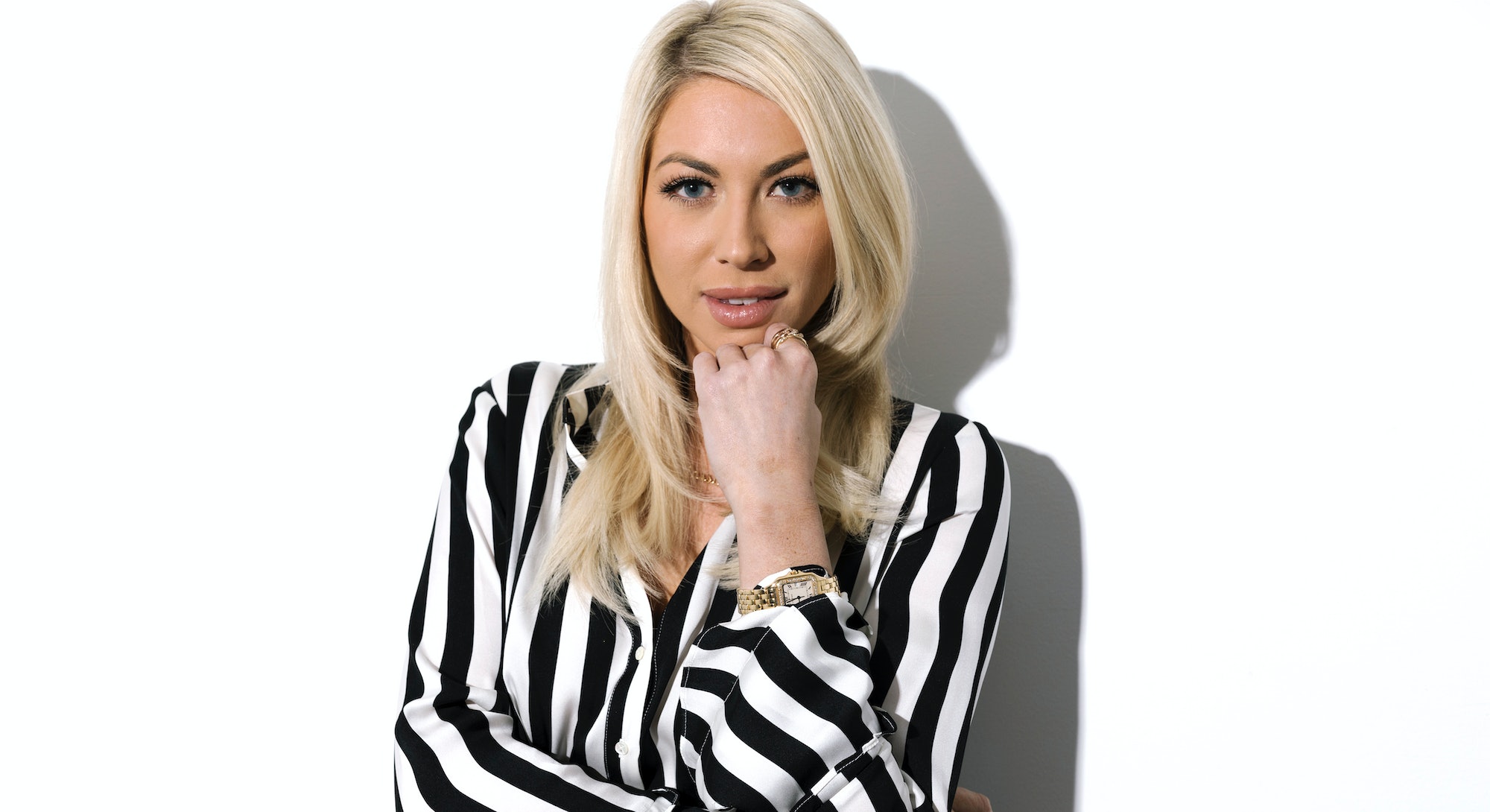 Talking with Vanderpump Rules' Stassi Schroeder immediately feels like having a deeply therapeutic, little-too-brutally-reflective conversation with a close friend, as she stretches out on the couch next to me. She's engaging and attentive and bitingly funny — all attributes that make for great television because this is what Schroeder does for a living, considering she's spent the last six years having her life documented on Vanderpump Rules, and on her podcast Straight Up With Stassi.

When I talk to her, what Schroeder’s currently reflecting on, on the eve of the Vanderpump Rules Season 6 premiere in early December, is turning 30. She’s on a show that’s well known for the messy exploits of a group of 20-somethings, who, six years later, are now 30-somethings. Schroeder’s presence on the show in Season 6 feels — for the time being — like a whole new era for her. While she’s still gossiping, drinking wine, and constantly talking about murder with BFFs Katie Maloney-Schwartz and Kristen Doute, Season 6 has her getting back together again with on-and-off-again boyfriend Patrick Meagher — a several-year relationship that Schroeder has taken very, very seriously, which is apparent in how fondly she still talks about Meagher.

While she wouldn’t give too many details about whether or not their reconciliation and eventual breakup (Schroeder’s now single again) will be on camera (Meagher finally agreed to be on the show this season after years of staying off camera), their breakup and her newly single status has her thinking about what 30 is going to be like.

The importance of Schroeder's birthday has long been documented on Vanderpump Rules, and Schwartz and Doute have already volunteered to throw her a huge bash on June 24 — one that we'll hopefully see on the show. She’s ready to feel the clarity of being older.

“The more mature I feel and the older I get, the better I feel about myself,” she says. “There's just something about turning 30 that feels empowering.”

Just in the past month, Schroeder’s already had to navigate a situation in which she had to acknowledge and confront her own mistakes. In a now-deleted podcast episode titled “Are We on a Male Witchhunt?,” Schroeder discussed the recent wave of sexual assault and harassment accusations in Hollywood —but her alleged comments angered many of her fans and sponsors. Since the podcast has been deleted, there's been some back and forth between fans on what was said on the podcast. Allegedly, Schroeder said that women were lying about allegations and claimed, "No one could make me suck a dick," according to some listeners. Others, including Schroeder herself, said that her quotes were taken out of context.

Schroeder’s since gone on a bit of an apology tour for the episode as a whole and for any statements that made a huge generalization about a very serious topic. She's tweeted multiple apologies and wrote a long letter and explanation for the episode on her website.

“I spent two days in my apartment not showering, not brushing my teeth, just reading emails from people, because I tweeted out asking for people's stories, and once I read so many of them, I was like, I can't possibly put into words in a statement or three sentences how I feel and what I'm so sorry for, so that's why I wrote that letter and put it out there," she says. "And I stand by all of that.”

The whole podcast debacle has also clearly been a growing experience for her. “What it's really done is just made me more aware of — more thoughtful of — everyone else's own stories,” Schroeder says. “And you never know who or what somebody else who is listening has been through, and that's really what I think I've learned from that. I can't censor myself all the time, I am who I am and that's what my podcast is about. I just need to be more mindful of other people's personal experiences.”

While this is a clear lesson for Schroeder, she also doesn’t want it to impede the well-known honesty that her podcast is known for. “There are going to be a lot of people that hate things and are not going to like my podcast today, too,” she says. “I can't make everyone happy. And I can't get in my head too much.”

Getting in her head too much would likely make Schroeder overthink what she's done on camera. Her time on Vanderpump Rules has documented the majority of her 20s, from dating noted sociopath Jax Taylor to the many heartbreaking fights with Kristen and Katie — but she’s adamant that she’s OK having her life, flaws and all, on TV. Say Schroeder:

I am so used to it that it would be weird if it wasn't. And I'm somebody that's always liked to live my life as an open book. I don't like secrets. I don't like having skeletons in my closet. I'd prefer them to be out there so people know what to expect from me.

That sense of willingness to show everyone everything, even if it might make her look awful, is ballsy and a bit unnerving. But that’s what makes Schroeder fascinating to watch on Bravo, to listen to on her podcast, to have a conversation her in person. With the #MeToo conversation and the ever increasing popularity of Vanderpump, it’s clear that Schroeder has a huge platform, whether or not she initially realized it. Straight Up With Stassi gives another POV into Schroder's life, but she's also filled her podcast with interviews with friends, as well as people who she admires and talks through a lot of #reallife problems.

“[My podcast has] given me a sense of purpose. Before this past week and all of that stuff and what went on, I always felt like I really do help women, because it's all about embracing exactly who you are,” she says. “Just because you watch the Kardashians, it doesn't mean you're any less intelligent. If you have basic b*tch tendencies, like, who gives a sh*t? We all have the same thoughts, so I want to encourage people to say them out loud.”

But while her podcast gives her a sense of purpose, she’s a bit more hesitant to say that she has a responsibility to be a role model. “No, I don't feel like it's a responsibility," she says, followed by a sigh. “I'm not sure if responsibility is the right word. I am who I am and that's it, and if I can inspire someone in a good way, then that makes me happy. But no one's forced to look up to me.”

And even if Vanderpump suddenly ended, Schroeder sees her podcast as a mere extension of that because she's still sharing her life on it. "I share "so much of my life [on it],” she says.

A huge part of her life is her relationship with Katie and Tom Schwartz, who finally married on the last season of Vanderpump. Schroeder insists that their marriage hasn’t changed her third-wheel dynamic with the couple yet — until they start having kids.

Right now, for Schroeder herself, she’s not remotely thinking about having children. Instead, she wants to use the last year of her 20s to learn more about herself — though that doesn’t stop Schroeder’s mother from asking her about grandchildren. “She's like, 'I just want grandchildren,'” Schroeder says. “That's it. That's all she cares about. She doesn't care if I'm in a relationship or not.”

We joke that Vanderpump is the child that her mother should be grateful for, but Schroeder does want to settle down eventually. “Yeah, obviously, we're at the age where everyone we know is getting married, but I really want to be like an older mom,” she says. “I'd be perfectly happy having kids in my late 30s or getting married in my late 30s.”

And on the cusp of 30, that gives her more than enough time to continue with her Vanderpump shenanigans — ones that, at times, illustrate the weirdly elongated adolescence that has become associated with millennials via internet think pieces, whether or not they're even accurate. She laughs about this comparison, saying, “I think every year, like, we're going to grow up soon. And then we never do, so, I have no idea.”

Luckily for us, whatever insights Schroeder might gain in her last few months in her 20s will be broadcast for all of us to enjoy.