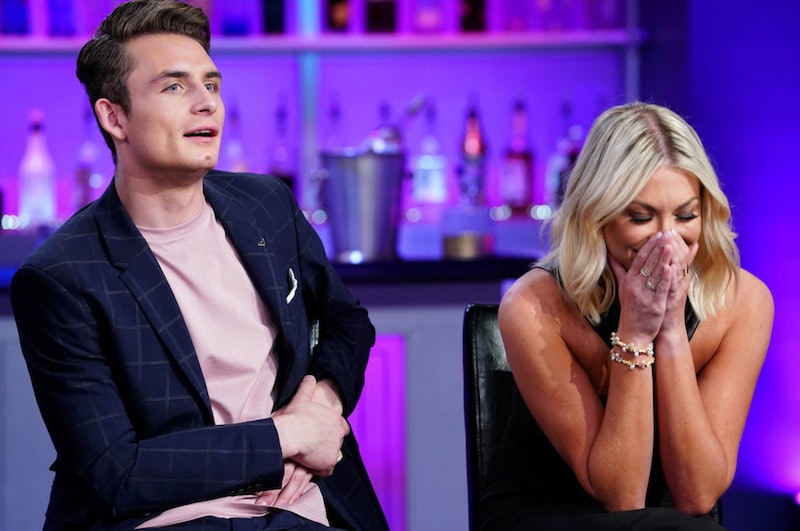 As you might’ve SURmised, the women of Vanderpump Rules have some thoughts on SUR’s resident DJ. In a sneak peek of this Sunday’s episode provided to E! News, Stassi Schroeder compares Raquel Leviss and James Kennedy’s relationship to her relationship with Patrick Meagher, offering up what feels like genuine concern. Of course, Stassi does not know all of the ins and outs of Raquel and James’s relationship, but she says that if she’s going off of what she has seen, “It’s not good. It’s not good at all.”

In the clip, we see almost all of the ladies of Pump Rules (miss you, Scheana Marie and Lala Kent!) hanging out at a bar in some sparkly dresses. Pump’s veteran cast members are joined by quasi newcomer Raquel (yes she has been on the show for years, but she did not get a talking head until Season 7) and they bring up the limited edition Supreme boxers-clad elephant in the room: DJ James Kennedy.

In the previous episode, the Pumptini hit the fan when another cheating rumor involving James emerged. This accusation prompted James to scream rude comments at his co-stars in the SUR alley in the middle of the restaurant’s Pride celebration. This eruption was not a one-off; James has a well-documented history of viciously lashing out at the other Pumpers in public. (The same can be said at some of his colleagues, but one SURver at a time.) And as many members of the Pump cast have said this season, they are done with James.

However, they are not done with his girlfriend. They invite her out and, as we see in the aforementioned clip, tell her they are not fans of James’s behavior. Maybe they are trying to stick it to James, maybe they are looking out for Raquel, or maybe it’s both. And then, in a heartbreaking talking head, Stassi says she “really relate[s] to Raquel.” She continues,

“With my last relationship, he talked down to me, I felt like he put me down all the time, and I was just so blinded by this idea of what I thought love was and wanting to make the relationship work, that I couldn’t see it for what it really was.”

Ugh, devastating. Sorry to be a broken record, but man, was it a relief when Stassi moved on from that guy once and for all; if you watched the Patrick Era of Pump Rules, then you know that this comparison is not positive one. Again, Stassi (and the viewers at home) are only privy to so much, but it does not feel unfair to say James can be incredibly disrespectful à la Man Bun Who Must Not Be Named.

Raquel tells the group that while she is “not proud” of the side of James that gets smashed and says horrible things, he treats her “like a queen.” The rest of the group responds with what may very well be the most uncomfortable silence in the history of sound.

Evidently, this gathering of Pump ladies did not pan out the way the Pump veterans hoped. Spoiler alert: James and Raquel are still together, and James still seems to be at odds with several members of the cast. Season 7, you've only just begun and ain't no drama got me feelin' like I'm feelin' you.