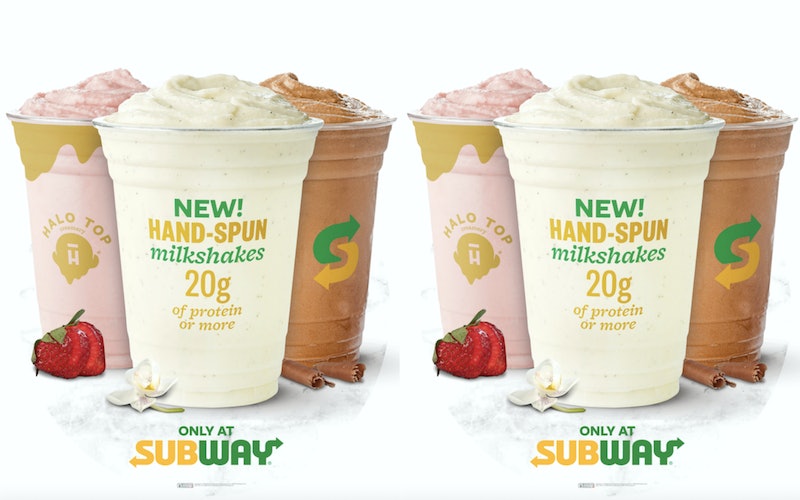 What a wondrous, magical time we live in. Well, it’s about to get even more wonderful. If you’re a fan of the Halo Top ice cream range then there is an exciting new twist on your favorite scoop — and it's going to be available at Subway. BUT THERE'S MORE. Subway and Halo Top are teaming up in an incredibly epic way because, starting on July 22, you can get Halo Top milkshakes at Subway. They are testing out the collaboration at specific locations and it looks so damn refreshing.

Subway is going to be offering three totally delish flavors — Vanilla Bean, Strawberry, and Chocolate. In other words, they’re giving you the three classic shake flavors. Subway is already one of the most popular food outlets in the country and I can only imagine that offering this variety of milkshake will make them even more popular. Now I’m just thinking of dunking a Subway cookie into a milkshake. I am a woman of simple, delicious pleasures.

So where can you get these beauties? Well, here's the thing — they're going to be testing these shakes at about 1,000 locations, but only from July 22 for September 4 (for now, at least). They'll be making an appearance in six test markets — Colorado Springs, Colorado; Hartford, Connecticut; Longview and Tyler, Texas; Salt Lake City, Utah; Toledo, Ohio; and West Palm Beach, Florida. So if you live in or are visiting one of these places, you owe it to us to go and try them while they last. Do it for the rest of us.

“We are thrilled to kick-off this partnership with Subway and bring these hand-spun milkshakes to life for everyone to enjoy,” Doug Bouton, President & COO, said in a press release. “We enjoy finding creative and innovative ways for people to eat more ice cream (and feel good about it), and we think this partnership provides the perfect platform to do just that.” Unless you’ve put Halo Top in a blender and hoped for the best, this is a totally new take on the popular ice cream — and they aren’t messing around.

Even though Halo Top is a relative newcomer on the ice cream scene, they have not been messing around. They constantly seem to be changing up their flavors — even offering a Key Lime Pie Halo Top option for the summer, which was an inspired move if I’ve ever seen one. They keep coming up with new and exciting vegan Halo Top flavors, like Peanut Butter and Jelly and Chocolate Hazelnut. They’ve earned a cult following for good reason.

In fact, the brand is so popular that Halo Top hair has become a thing because... the internet knows no bounds? God is dead? We have too much time on our hands? I don’t know why, but it happened and it can’t un-happen.

Of course, if you’re just about getting your milkshake on, then there are plenty of different ways to make that happen. Sonic just launched an Oreo Cake Batter Shake which looks, for lack of any other word, orgasmic. Meanwhile, Hardy’s brought us the Froot Loop Mini Donut Milkshake, which may be a tongue-twister but is definitely worth it. And it’s obviously the season of Dairy Queen Blizzards in all of their delicious forms (s’mores, anyone?).

Halo Top is a love-it or hate-it kind of ice cream, but it’s definitely gotten a huge following for its innovation and huge range of flavors that never seems to stop growing. And what makes ice cream even better? Putting it in shake form so my lazy ass doesn’t have to lift my spoon to my mouth any more — just let me suck threw a straw in peace. And there’s no way I’m the only lazy person out there. People are going to love the convenience of being able to get a Halo Top shake right at Subway, so keep your eyes peeled on July 22.