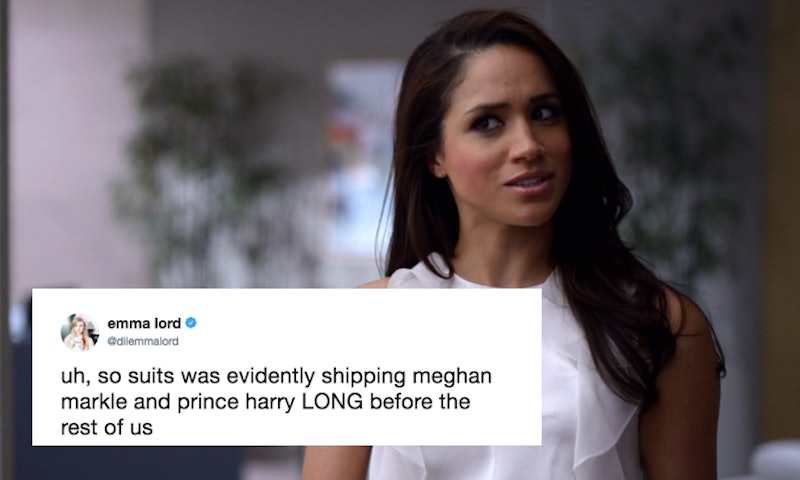 Royal family devotees, it turns out Meghan Markle and Prince Harry's love story may have been foretold way back in 2013. On Saturday, Bustle's Lifestyle Editor Emma Lord tweeted about a Suits scene that totally predicted Markle and Prince Harry's romance in Season 3, and it's too perfect. The scene in question occurs in episode four, "Conflict of Interest," in which Markle's Rachel and Sarah Rafferty's Donna discuss a visiting British lawyer, Stephen Huntley (played by Max Beesley). Stephen gets super flirty with Rachel, but Donna is the one who's interested, which leads to the following possibly prophetic exchange.

After Stephen stops getting his flirt on, Donna and Rachel discuss the merits of mixing business and pleasure with the British charmer. And Rachel is awfully quick to point out exactly why Stephen might be worth dating. The women's conversation goes like this:

Donna: Why should I go out with him? Just because he's charming and hot...

Rachel: And witty and British...

Donna: And he has a title.

So, Rachel likes witty British men with titles, huh? Fast-forward to 2017 and Markle is making all of Rachel's Suits (supervising sound editor: Stefani Feldman) romance dreams come true. Sure, Prince Harry's name isn't specifically dropped in the scene, but Donna and Rachel could totally be talking about him. The guy is charming, British, excellent at bringing his A-game when it comes to wit, and unlike Stephen, he's definitely got a title.

Did Suits predict the future, you guys? It's not ironclad, but someone should check the writers room for psychics, just in case.

In the world of Suits, Rachel's one true love is her co-worker Mike, and fans are hopeful that Season 7 will end with the two of them finding their happily ever after before Markle leaves the series to start her life with Prince Harry. It would be a fitting end for the character, especially since Markle is following her heart to London.

While Rachel was talking up the merits of dating handsome British men on-screen back in 2013, Markle reportedly didn't start dating Prince Harry until 2016. The two were introduced by a mutual friend, and have since become one of the most talked about couples on both sides of the pond. In November 2017, the royal couple announced their engagement, and now fans of Markle and Prince Harry are eagerly awaiting their May wedding — which, thankfully, will be televised.

Just the thought that the universe was putting out positive vibes about Markle and Prince Harry's future three years before they met is enough to make any romantic swoon. At the time, the scene likely seemed like nothing more than a cute conversation between the show's two female leads, but now it feels like even more proof that Markle and Prince Harry were meant to be. Seriously, you can't argue with fate. (Cynics, sit down.)

Prince Harry and Markle's romance already feels like a real-life fairytale. After all, Markle is an American actor, who lived in the United States when she met the royal — she probably never imagined she would end up engaged to one of England's princes, just like Prince Harry likely had no idea that the love of his life would be a smart, talented American woman with no ties to the world of British nobility that he grew up in.

Everything about Prince Harry and Markle's relationship feels like the stars had to align just right for them to meet and fall in love, so discovering a tiny hint from the past that they were totally meant to be only makes their story all the more special. Before Prince Harry, Suits was one of Markle's most enduring relationships, so it's only fitting that the show seemed to know her heart would belong to a British royal long before she did.