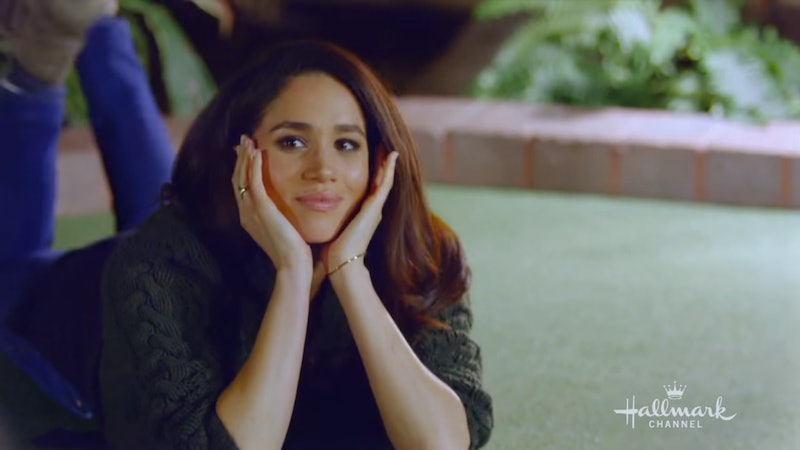 On Monday, Nov. 27, Clarence House, the residence of Prince Charles and the Duchess of Cornwall, announced the engagement of Prince Harry and actor Meghan Markle, prompting many people to ask, will the wedding be televised? The answer to that question is still unknown, but thanks to Markle's Hallmark movies, you can watch the newest member of the royal family live out a fairy-tale romance right now. Before she entered the public spotlight in a major way by dating Prince Harry, Markle was already a talented actor with plenty of credits to her name. Thanks to her role in the long-running USA series Suits, she's a true TV star stateside, and like many of her acting peers, Markle has starred in her share of Hallmark movies.

For the uninitiated, Hallmark movies are known for being formulaic love stories that are so saccharine they would rot your teeth if they were edible. They're also comforting and heartwarming in their predictability. These gems tend to star TV actors you know and love, and come with the promise that the right people will always get their happily ever after. There's very little not to like about a well-crafted Hallmark movie, and thankfully, both of Markle's are first rate.

Markle has starred in two Hallmark masterpieces: Dater's Handbook and When Sparks Fly. Sadly, neither of these are Christmas movies, which is where the Hallmark Channel truly shines, but they're still must-see films for anyone who's working through Markle's oeuvre while they wait for more royal wedding news.

In When Sparks Fly, Markle plays Amy, a journalist from Chicago, who realizes that her big city life isn't as satisfying as she had dreamed it would be. She returns home for the Fourth of July and reunites with her childhood sweetheart, Hank — who is the perfect guy for her, of course. Just to be clear, the trailer is basically the entire movie, but don't worry, it's not actually possible to spoil a Hallmark movie. Much like Prince Harry and Markle, Amy and Hank are forever, and you'll know that from the minute his name is mentioned onscreen for the first time.

There's not much of a star-crossed element here — Amy and Hank are from the same small town, after all — but When Sparks Fly is still likely to make your heart flutter. It's also set on the most American of all the holidays, which will remind you that an American is joining the royal family. Watch this movie and mentally high five Markle for helping make your adoration of the British royal family make more sense.

This time around Markle stars as Cass, a businesswoman who is successful in everything but love (another tried and true Hallmark trope). Her character turns to a self-help book to help her find the right guy and ends up with a decision on her hands — go with the boring, but seemingly dependable guy, or the fun-loving, super attractive dude played by TV favorite Kristoffer Polaha? FYI, this isn't even a real question.

Are there shades of Prince Harry in Polaha's character? Absolutely. He's charming, funny, and playful. He's not royal, but hey, not many people can say that they are.

If it sounds like Amy and Cass are basically the same person, it's because Hallmark heroes are always successful women looking for love, but Markle plays them both with wit and grace. The actor's Hallmark movies may not show off her range quite as well as Suits, but they're more likely to make you think about princes, princesses, and dreams coming true. And in the wake of the announcement of Markle's engagement to Prince Harry, that's exactly what fans of the royal family need in their lives.