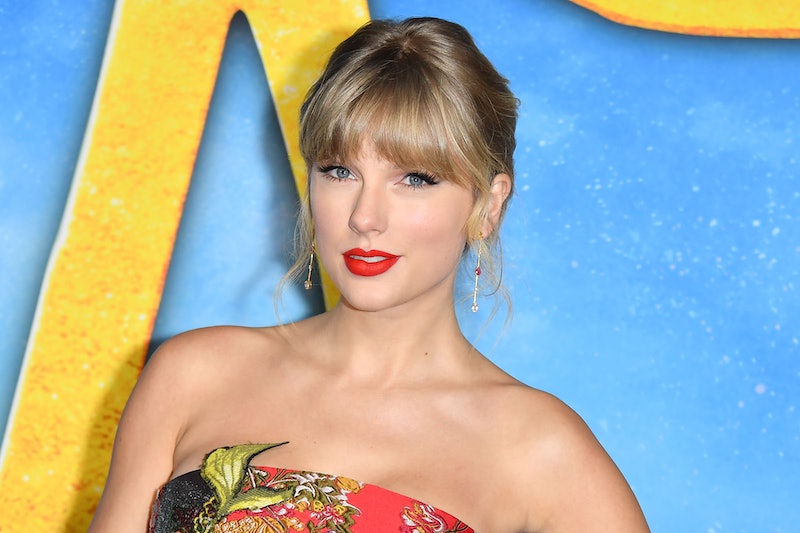 When it came to finding inspiration for the feline characters in the upcoming adaptation of Cats, the cast and crew didn't need to look any farther than a trio of very famous kitties. At the star-studded New York City premiere of the musical movie, Taylor Swift revealed her pets inspired Rebel Wilson's Cats character, telling reporters that Meredith Grey, Olivia Benson and Benjamin Button reminded everyone of Jennanydots.

"I knew early on they’re not the kind of cats I was gonna be channeling because the kind of cat I’m channeling is very athletic and sort of wild," Swift told People, referencing her character, Bombalurina. However, her three furry friends are "beautifully round," according to Swift, who added, "They’re fuzzy. They look like little lazy bears. They’re always taking naps. They’re not the kind of cat that I’m playing." However, the singer revealed that it quickly became clear that her pets were a great source of inspiration for Wilson's seemingly lazy cat character.

While speaking with Entertainment Tonight in a separate interview, Swift explained that the instructor at "cat school" actually noticed the similarities after she introduced her to Meredith, Olivia and Benjamin. "She was like, 'Can I send [photos] to Rebel? They're the perfect inspiration for her cat!'" Swift recalled. "So, my cats didn't inspire me — but I like to think that, when they were sent to Rebel, they did inspire her for her character development."

While Wilson herself didn't credit Meredith, Olivia, and Benjamin with inspiring her Cats performance, her description of Jennyanydots at the premiere did seem reminiscent of what Swifties know about the singer's pets. "I love my character. She’s really fun," Wilson told People at the premiere. "I think myself and James Corden [who plays Bustopher Jones], we bring the comedy to the film. The original material was T.S. Eliot poetry, so it was quite challenging to get some modern humor into the movie." The Aussie actor also noted that attending "cat school" helped her and her costars channel the animalistic movements.

Back in May, Swift told Entertainment Weekly revealed more about what she learned while attending "cat school" as part of her preparation for Bombularina. "[It] was a class where you could learn about how to create the motions of cats," she said at the time. "How to think like they think, how to sense things the way that they do, carry yourself the way a cat would. I learned a lot." Naturally, the cat-loving singer had a great time learning how to channel her feline friends: "I just fully committed and threw myself into the process and had the most fun," Swift said.

While her tour experience helped Swift make it through the long days of filming, Cats also helped the singer unwind and have fun after months on the road. "I’d just come from a stadium tour, and then did Cats," Swift told Vogue UK in a December cover story. "I really had an amazing time with Cats. I think I loved the weirdness of it. I loved how I felt I’d never get another opportunity to be like this in my life." Between the musical's "weirdness" and its connection to her own pets, it seems that Cats really was a once in a lifetime opportunity for Swift.