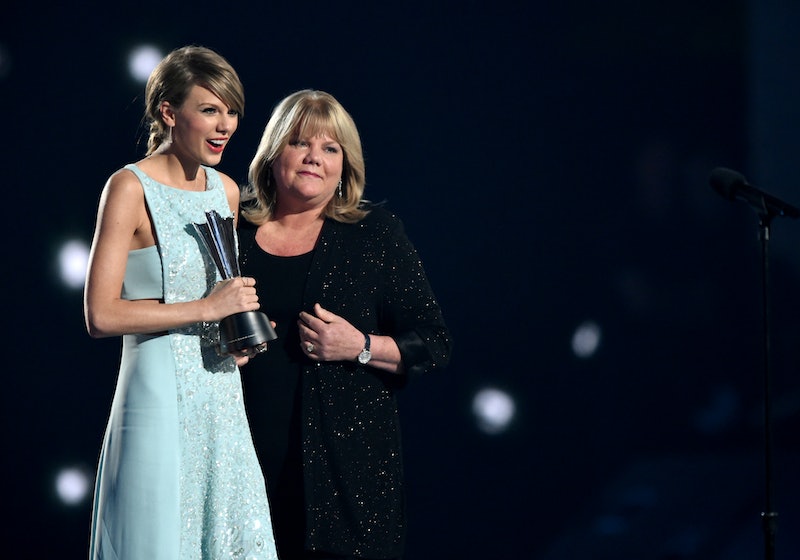 When Andrea Swift took the stand at her daughter’s sexual assault trial this week, she was understandably emotional. She said she wanted to “vomit and cry” when her daughter, Taylor Swift, told her that Colorado radio DJ David Mueller had allegedly reached under her skirt and grabbed her bare butt during a meet-and-greet after her concert at Denver’s Pepsi Center on June 2nd, 2013. (Mueller has denied the allegations, and is in the process of counter-suing Swift for defamation.)

Although Andrea Swift was speaking in the well-publicized trial of one of the most famous singers in the world, so much of her testimony felt familiar. Her descriptions of her daughter’s reactions — how she felt “humiliated” and “horribly embarrassed,” how they didn’t initially report the incident to the police because they didn’t want her to be “defined” by her assault and forced to relive it again and again — I’d had all of these conversations before, many times. I’d heard the same words spoken in hushed voices, seen the lowered eyes and hunched shoulders and arms wrapped tightly around knotted stomachs, bodies struggling hold themselves together under the combined weight not only of someone else’s violence, but of their own shame. It all felt familiar, but nothing hit quite as close to home as when Andrea Swift told jurors:

“She couldn’t believe that after the incident, she thanked him for being there. She said ‘Thank you.’ It was destroying her. It made me question why, as a parent, I had encouraged her to be so polite.”

Reading those words felt like someone had punched me in the gut, not because I couldn’t believe Taylor Swift had thanked the man who allegedly violated her body and emotional well-being, but because … of course she had.

Women are taught from a young age that we are responsible for other people’s feelings and actions, specifically men’s. Strangers tell us to “smile more,” coworkers tell us to “calm down,” courts tell us we were “asking for it” with our clothes ... If a man gets upset and hurts us physically and/or emotionally, we’re told it’s our fault, that we should have been smaller or quieter or bigger or louder. So it’s in our own best interest to be polite, to keep men happy in the hopes they won’t hurt us.

This dangerous narrative has increasingly come under fire. When I was little, my mom told me again and again never to worry about being polite if I felt uncomfortable. “Any decent person will understand a woman feeling scared,” she said, “and if they’re not decent, all the more reason to get out of there.” One of the unofficial slogans of the popular true crime podcast “My Favorite Murder” is “fuck politeness,” and it’s a credo that’s resonated strongly with women eager to reclaim their safety and space.

But as with so many things related to assault, reality is far more complicated than just saying “fuck politeness.” Not only does that in some ways put the onus on women to avoid assault, but politeness itself is complicated. It's both a weapon used against us, and a shield to protect us. Predators can exploit the expectation of a woman’s politeness to keep her in a vulnerable situation, yes, but women also use politeness to defuse potentially dangerous situations.

We smile at the man that shouts at us on the street, laugh off the drunk guy pressing against us at the bar, and say thank you to the man who just reached his hand up our skirt and grabbed our butts, because as awful as it is, as humiliated, small, and ashamed as we may feel, it’s safer than the threat of physical violence if we make our attackers angry.

Of course Taylor Swift said thank you to the alleged incident. Because who knows what would have happened if she hadn’t? What would any man who is much bigger than her physically have done if she screamed or shouted?

Andrea Swift’s testimony is a reminder of just how unevenly the burden of assault is shared. Taylor Swift was allegedly violated, and felt embarrassed for saying thank you, and her mother was upset for encouraging her daughter to be polite. And David Mueller, the man who allegedly assaulted Taylor Swift? He sued them for $3 million dollars in damages after he was fired, because Swift's team had stopped being "polite" and informed his employer of what had allegedly happened.

Many women don't have access to the financial and emotional support that Swift has had. But this trial has been a reminder that no woman, no matter how wealthy or famous or surrounded by bodyguards she is, no matter how polite or impolite, is immune from the threat of assault. The trial will also show whether or not even the most powerful of women can receive justice. As Swift's attorney, Douglas Baldridge, told jurors:

"What is at stake is, will this man be able to stifle a young woman’s ability to report a sexual assault? If this person cannot stand up and serve as an example to other young women who have been sexually assaulted, then who can?"

More like this
Megan Barton-Hanson On Bi-Visibility & The Need For LGBTQ+ Love Island
By Sam Ramsden
Jujubee’s Humble Reminder
By Sam Ramsden
Adele’s All-Female Lineup Includes Kacey Musgraves, Mahalia, & Self Esteem
By Shahed Ezaydi
Why “Patch Snatch” Ponytails Are Everywhere Right Now
By Tomi Otekunrin
Get Even More From Bustle — Sign Up For The Newsletter