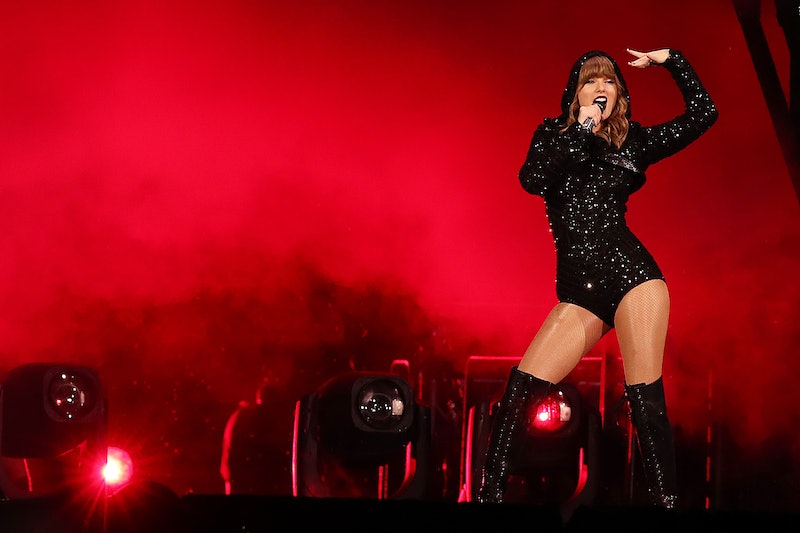 Baby, let the theories begin, let the theories begin, let the theories begin. If her New Year's Eve costume means what some fans think it means, Taylor Swift's next album could be all about mermaids. Thanks to that Little Mermaid 'stume Swift wore to her NYE party, some folks suspect her the followup to Reputation is going to go in a scaly, aquatic, and fantastical direction. Now, before you mumble "Huh, I guess a gal can't wear an Ariel ensemble to her own NYE party without creating a tidal wave of theories" under your incredulous breath, please note that this is one of several mermaid moments Swift has given us recently. And these mermaid moments might be a sign of what is to come. A Taylor Swift Mermaid Era could be on the horizon.

...Or maybe not. Maybe Swift just really likes mermaids right now and maybe she is not actually dropping hints about her next album and maybe we're all getting carried away. Maybe mermaids will not play a role in the next chapter of her music story after all. Maybe the mermaid is not the new snake. Maybe the straws we are grasping at are slithering out of our hands.

But then again, this is Taylor Alison Swift we’re talking about. If she has taught us anything, it is that we should always sleep with one Easter egg-spotting eye open. No, not everything she does or says or wears is a clue, but some things are. And so, when Swift gives us anything that might be a clue, we have no choice but to latch onto it, to dissect it, and to spend countless hours ruminating on it. Otherwise, we run the risk of letting bona fide crumbs about her seventh album slip under our radar, which is a fate worse than getting locked out of your own kingdom before your enemy throws a feast (what?).

And the mermaid motif does not start and stop with the Ariel costume she wore on NYE. As folks on Twitter have pointed out, Swift skips around in a a mermaid tee at the very end of the the Reputation documentary. Oh, and there is also the mermaid patch on that jacket that was on the cover of Reputation magazine.

Like any good Taylor Swift album theory, numbers are a part of the Mermaid Era Theory. As several astute fans have noted, The Little Mermaid was released on Nov. 13, 1989, which is a Very Taylor Swift Date. As you know all too well, Swift not only was born in the year 1989, but named her fifth album 1989. The number 13 is Swift's lucky number. And thanks to Reputation, November (*takes deep breath* *does some lunges* *prepares to do some stretching*) may or may not be Swift's new October.

Bring on the Mermaid Era.

More like this
Everything To Know About Taylor Swift’s 10th Studio Album, 'Midnights'
By Grace Wehniainen and Jake Viswanath
Taylor Swift Wants To Direct A Movie Next — But You Might Have To Wait
By Radhika Menon
Twitter Is Freaking Out Over Rihanna’s 2023 Super Bowl Halftime Show Announcement
By Stephanie Topacio Long
The Spice Girls Just Dropped A Brand New Music Video
By Sam Ramsden
Get Even More From Bustle — Sign Up For The Newsletter