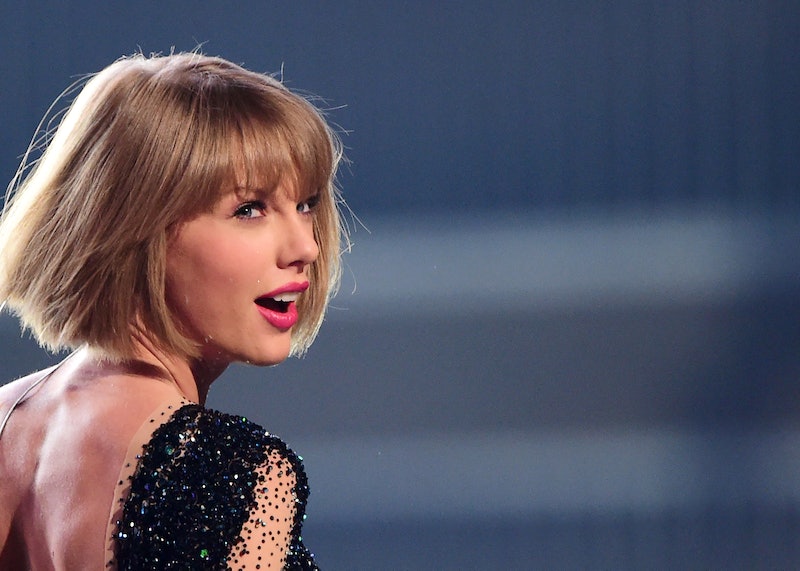 After hyping up her song "Look What You Made Me Do" with days' worth of snake videos, Taylor Swift dropped a new song unexpectedly during Saturday night's football game — and let's just say fans weren't ready for it. That's pretty ironic, since the track is actually called "Ready For It." For the record, it sounds like the total opposite of "LWYMMD." And if anything, it definitely gives off old Taylor vibes — despite the fact that she's, you know, "dead." UPDATE: The full song is now here, and while it's a little harder than the initial tease, it's still classic Taylor. (Below.)

EARLIER: As exciting as new music is, so far, she only premiered a tease of the song's first minute. It's currently unclear when the full track will be available to fans. (Bustle reached out to Swift's rep, but did not receive an immediate response.) It's also unclear whether the song is part of Swift's upcoming Reputation album, or simply a promo with ESPN.

While her full album drops in November, the surprising release of "Ready For It" shows that it's going to be quite a rollercoaster — and you never know when Swift's going to give us something new. After all, it was only a little while before the song teaser was released that Swift cryptically posted on her Instagram story, writing, "ABC, 8 PM ET. Alabama vs. Florida State. #ReadyForIt?"

In the accompanying clip, Swift's vocals are heard as Florida State and Alabama's football teams prepare for a big game. Unlike "Look What You Made Me Do," this track isn't calling out any past feuds or haters. If anything, it could actually set the tone for moving forward and a fresh start. She repeatedly sings,

"Are you ready for it?

The lyrics are pretty simplistic, but the point more so seems to be setting that spirit for the big game. She continues, "In the middle of the night / In my dreams / You should see the things we do, baby."

Interesting enough, the whole football vibe feels reminiscent of Swift's "You Belong With Me" video, where she's in the stands and the cheerleader's on the field. And if that's the case, this may hint at some truth to the astute fan theory that each version of Swift at the end of the "LWYMMD" video represents a different song on the album. It would make sense, since there are 15 tracks and 15 Taylors. It's also worth noting that "You Belong With Me" Taylor is amongst that crew, so that could potentially be representative of "Ready For It."

Regardless of what this all means for the album, Swift's new song is here — as is a new era of her music. So, be prepared for anything to happen next. Are you ready for it?