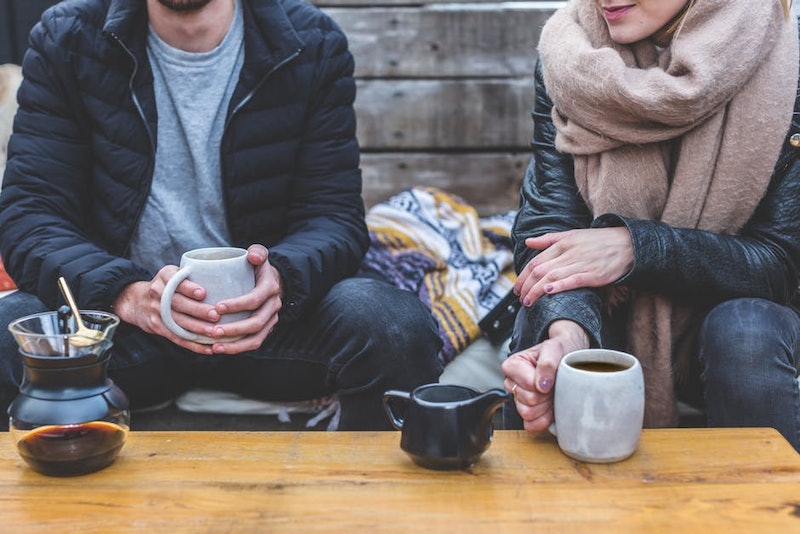 Whether you're blurting out something rude during an argument, or sharing a "helpful" comment that's actually more of a criticism, it seems there are plenty of things you should never say to your partner — especially if you want a healthy relationship.

That's not to say that you need to keep things bottled up inside. Or that you should police every word you say. But you should think twice before unleashing hurtful words, or approaching your partner with a problem in a way that's only going to be harmful. "Words can have a very damaging impact on a relationship," certified counselor Jonathan Bennett tells Bustle. "Loving another person requires a lot of vulnerability and trust. Insulting your partner, especially if it’s related to a very sensitive issue, can seriously harm his or her self-esteem in the long term."

The same is true for anything rude you didn't mean to say that may have flown out in the heat of the moment. While it's impossible to be perfect 24/7, it's a good idea to plan ahead and promise yourself you'll try not to say them. "In many cases, the worst language comes out during an argument when you lose some control of your rational self," Bennett says. "The key is to resist the urge to lash out at your partner while in a heightened state of anger or anxiety." Read on for some of the choice worse and phrases you should probably avoid, for the sake of your relationship.

If you have to preface your thought with this statement, it's likely better left unsaid. And this is true, even if you're just trying to be honest. "Complete honesty in relationships can often seriously back-fire," says relationship therapist Julienne B. Derichs, LCPC. "Intimacy, comfort, and closeness is often confused with 'unbridled self-expression,' which is where a person lets the flood gates open and out pours the unedited ways that his/her partner does not measure up." What you really want to do is share your concerns in a kinder way. Or, better yet, just accept your partner for who they are.

"Global criticisms" are another thing Derichs recommends avoiding. Statements like, "You're acting just like your father (mother, sister, brother, etc)," or "I can't believe you would do that... everyone knows that's not how you wash the dishes." See how global and all-encompassing they sound? Since comments like these demonize your partner as a whole person, and not just the thing they did wrong, they can lead to arguments and hurt feelings. And that's not OK.

Even though you likely don't mean it, don't let the H word slip out. "In the heat of the moment, it’s easy to lash out and say hurtful things," says Bennett. "However, expressing hatred towards your partner is one of the most hurtful statements you can say. It’s not something your partner will easily forget and can poison the relationship."

This is another one that'll echo in your partner's head forever. "This one sweeping statement diminishes an entire relationship filled with love and good memories," Bennett says. "Just because you’re in a present rough patch in your relationship, don’t let your words negate a happy past."

While you might have good intentions when pointing out your partner's physical changes, keep in mind these statements are almost always hurtful. As psychic and spiritual counselor Davida Rappaport tells me, your partner may be dealing with an underlying issue that's led to their changes. So, if you truly want to help (and not just make a rude comment) address that issue, instead of how they look.

This one doesn't really seem like a big deal. I mean, we all said it in kindergarten, right? But do try to keep it out of your relationship, if you can. "Not only is this rude, this discounts what your partner is trying to express," says therapist Kimberly Hershenson, LMSW. "If your partner is saying something offensive, be direct about what is offending you without being negative."

Nothing hurts more than being dismissed. So pay attention to any words, like "I don't have the time," that may sound like you're trying to brush your partner off. "This comes across as not caring about your partner's needs, and may make them feel they aren't important," Hershenson says. If you truly don't have time to chat, look at your calendars together and figure out the best time to sit down and chat. Let them know you'll hear them out then, and everything should be OK.

In a similar vein, telling your partner you don't care is just downright rude. And, it shuts down communication — which is the last thing you want to do in a relationship. "If you have a thought or feeling about something, it's important to express it," Hershenson says. "Saying you don't care shows indifference, which is not beneficial to a relationship"

While it may be tempting to ask your partner who they're texting/emailing/calling — especially if you've had trust issues in the past — this isn't the best way to express your concerns. Not only that, but Rappaport tells me it's important to not jump to conclusions. If you're worried about who your partner is talking to, bring it up with them directly. Asking them who they're texting will only put them on the defensive. And that's not helpful.

If you two just finished arguing, it can be tough to apologize. And yet, there's nothing helpful about holding onto your pride. "A simple 'I’m sorry' can do wonders to ease hurt feelings and work toward healing feelings, egos, and relationships," Rappaport says.

Let's say your partner opens up and shares a deep secret. Even if you don't see the big deal, avoid expressing those sentiments. "Couples need to know that what they say and do at their most vulnerable moments will be held carefully by their SO and not used against them in jest or when times are tough," Derichs says. "We need to be careful with and consider the words we use with our SO."

Because, even if you didn't mean anything by it, your words can have a big impact on your partner. Choosing what you say, and keeping calm when things get heated, can prevent hurtful words from affecting your relationship.