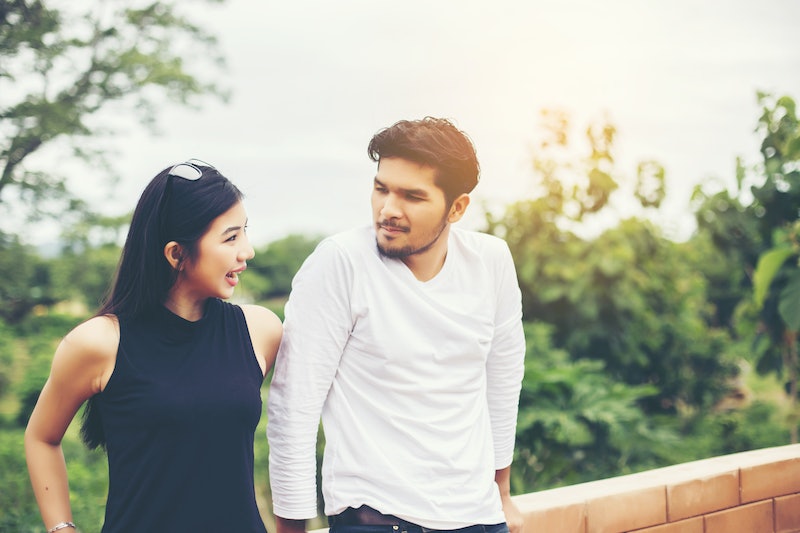 Everyone occasionally messes up and says things they don't mean. Maybe you snap when you're tired, or your partner becomes extra snarky whenever they're overwhelmed. It's totally normal, and usually OK — as long as you both apologize. But there are things your partner should never say to you (and vice versa), if you guys want a healthier relationship.

I'm talking about words and comments that aim to hurt, target a point of insecurity, or threaten your relationship. Unlike smaller daily indiscretions (like being cranky when you're tired), these harsh words are often difficult to forget. And some can even ring in your head for days (or weeks, or years).

Take name calling, for instance. As licensed marriage and family therapist Lisa Locke, MS tells Bustle, words can't be taken back. So if your partner drops a few choice phrases, it really can change your relationship forever.

If things have gotten to such a point, it's obviously more than OK to call it quits. But if you want to salvage your relationship, it's usually possible to turn things around. "If both partners gain awareness, have a desire to change, and practice something different, then healing can happen and the negative pattern can be broken," Locke says. Read on for a few comments that are never OK to say, as well as what to do when/if things get out of hand.

A healthy partnership consists of people who are able to stand on their own two feet. But being in a relationship also means offering each other support. So it's easy to see why it's be hurtful if you reached out for that support, and your partner called you "needy."

Comments like these are not only cold, but they invalidate your feelings, therapist Lisa Bahar, LMFT, LPCC, tells Bustle. If your partner says this to you, you might hesitate to approach them again in the future, and that can start to create a rift over time.

To create a solid foundation for your relationship, there should be a healthy balance of give and take. If one of you does genuinely become "needy," talk about it. And find ways to make each other's needs in a way that feels fair.

It's never acceptable for your partner to insult your intelligence, or to imply that something you say or like is "dumb." As relationship expert Noni Ayana M.Ed. tells Bustle, when you're on the receiving end of such comments, it really can hurt your sense of self-worth. Plus, it's just downright rude.

If your partner ever says such a thing, let them know you aren't OK with it. They might not realize how painful it is, or they might think they're just making a joke. And yet, by establishing boundaries and standing up for yourself, they'll know not to say it again in the future.

Every couple is different, so if you and your partner enjoy exchanging compliments, or critiquing each other's looks, then have at it. But if comments about your appearance make you uncomfortable, let it be known they're totally off limits.

After all, "body-shaming or anything bashing appearance can destroy confidence," relationship expert April Davis, tells Bustle. It can be hurtful enough coming from stranger, but coming from someone who is supposed to have your best interests at heart can make it a doubly painful.

Again, not saying you or your partner need to validate each other's fashion choices. But if you ask how something looks, nothing's colder than an apathetic "you look fine" as a reply.

As relationship expert Samantha Daniels tells Bustle, "This is not a relationship-ending comment, [but] it is not a feel-good one either." It can send a message that your partner isn't listening, or that they aren't invested in what you care about.

Over time, lazy comments like these can start to build up, and it can even lead to resentment. To remedy the situation, you can choose not to turn to your partner for their comments, and ask a friend instead. Or, you can let your partner know what you're looking for, in terms of compliments and connection. It's possible they just didn't realize the impact these words were having, and they'll be happy to make a change.

Unless your partner really and truly means it, they should never threaten to break up with you, or toss that option around every single time they get upset.

"It plants a seed of insecurity in the relationship instead of sending a signal to [you] that, no matter how difficult things are at the moment, [they are] committed to staying and working on the relationship," psychotherapist Kathy McCoy, PhD, tells Bustle.

It may be a go-to phrase they turn to in order to get a point across, but the damage just isn't worth it. Instead, talk about better ways to handle strong emotions. That way, the next time you're both in the heat of the moment, the argument will be less likely to take such an unfair turn.

This is another thing that may slip out when you're upset. But it definitely shouldn't become a habit as it "implies you don't believe anything your partner says, and that you have issues with trusting yourself or others," Ayana says.

If you suspect there's some shadiness going down in your relationship, talk about it in a calm and collected way. In doing so, you'll show each other that you can have mature conversations about tough topics, and that you want to work on improving things.

Your partner should never tell you how you feel — physically or emotionally. As author and relationship expert Susan J. Elliott, J.D., M.Ed. says, "It’s important for partners to never invalidate the feelings — physical, emotional, or the expression of feelings — of each other." It's a slippery slope that nobody needs to be on.

It's not a great sign if your partner blames you for everything. Not only does it show a lack of accountability, Ayana tells me, but it's often a tactic abusive partners use so they can keep repeating their bad behaviors. If your partner constantly makes everything your fault, it may be time to reconsider your relationship.

It's never ever OK for your partner to compare you to their ex — or anyone, for that matter. "Being compared to someone else leads to feelings of inadequacy and doubt about your own self-worth," Daniels says. "Your partner should keep quiet when it comes to things like this if he or she really cares about you."

While it's fine for partners to point out each other's flaws — all in the name of growing together — it's not cool if your partner is critical at every turn. As licensed clinical psychologist Helen Odessky tells me, any words or comments that are overly critical should be off limits. Not just because they're hurtful, but because they don't bring anything good or helpful to the relationship.

If your partner calls you names — especially any that make you feel shamed — it can (obviously) start to affect your self-esteem, clinician and behavioral expert Rob Weiss tells me. And if it's really shaming, name calling can even pass over into the realm of emotional abuse.

While some mean/rude/hurtful comments from your SO are forgivable, others definitely aren't. If you feel like you're stuck in an emotional or verbally abusive relationship, there are things you can do to get help.

More like this
20 Things You Should Never Tolerate In A Relationship
By Rachel Sanoff and Kathleen Ferraro
The Best Time To Date After A Breakup, According To Experts
By Bustle Editors
12 Ways You're Sabotaging Your Love Life
By Teresa Newsome and Lexi Inks
25 Things I've Reduced My Life To, In Addition To WFH In My PJs
By Ginny Hogan
Get Even More From Bustle — Sign Up For The Newsletter