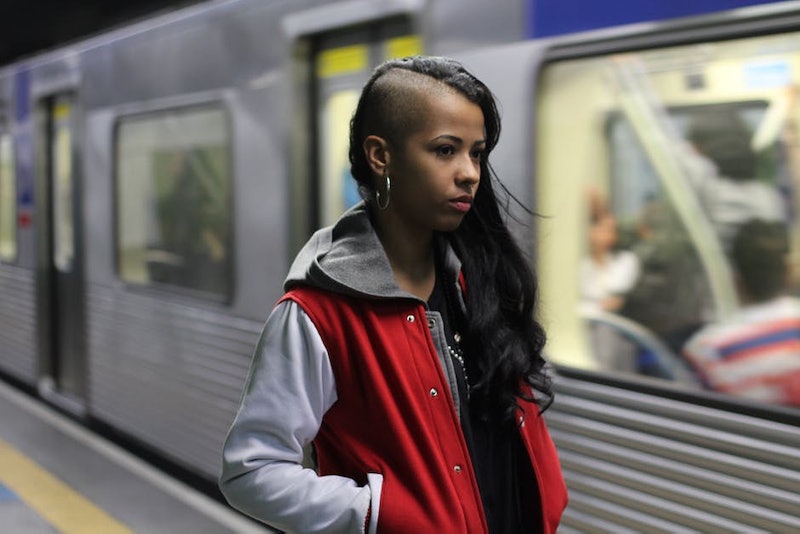 So much changes in your 20s and 30s, it's no wonder this is the prime age for the development and manifestation of certain mental illnesses. Anxiety disorders are a big one among young women. As is depression. But what are the other mental health issues to watch out for early on in life? And why do so many of them seem to come out of nowhere?

"This is a time of life where women in particular are on a ticking clock to make a decision as to how they wish to spend the rest of their lives," psychologist Dr. Michele Barton, director of clinical health at Psychology Life Well, tells Bustle. "Will they or will they not have children? Will they continue education? Pursue a career? Or all of the above? Those are a lot of very important and psychologically-loaded decisions that seem very permanent." And the stress can be overwhelming.

The very act of growing up can trigger issues, too. "Developmental and hormonal changes play a role," says Josh Klapow, PhD, clinical psychologist and host of The Web Radio Show. As can life experiences. "Living long enough to be exposed to traumas, environmental situations, and other life experiences can trigger a disorder."

Read on for some mental health issues that can crop up or get worse in your 20s and 30s, as well as how to deal.

This one might not come as a surprise, but everyone needs the occasional reminder that anxiety is a big deal, and can really impact your life. If it rears it's ugly head in your 20s or 30s, it likely has to do with the pressures of adult life, which can truly suck.

"Once you are independent both physically and financially, it can be difficult dealing with responsibilities," says NYC-based therapist Kimberly Hershenson, LMSW. "Having to work, pay bills, handle relationships, and take care of yourself can be overwhelming lead to anxiety."

While eating disorders are often associated with teenagers, it's now known they can affect women (and men) at any age, especially when you're a 20- or 30-something. As Hershenson says, "Young adults are now dealing with the onset of eating disorders."

She tells me this has a lot to do with social media — and the way we compare ourselves to others — as well as an inability to deal with our stress, issues with low self-esteem, and the negative body image that can result from it all.

Your genes play a role in the development of bipolar disorder, but Hershenson tells me the stresses of young adulthood can trigger the onset. While the disorder afflicts men and women in equal numbers, hormones can make the experience a bit different for young women.

According to WebMD.com, females are likely to have more symptoms of depression than mania, and our hormones and reproductive factors can also influence the condition and its treatment.

If you're going to develop borderline personality disorder (BPD), it'll likely set in at some point in your early 20s. As therapist Amy Moreira, LMHCs tells me, this is when young women are going through a lot of changes socially, like at work, in school, and in relationships. If you have BPD, you'll likely notices all sorts of issues in these areas. Click here to see some of the symptoms you might recognize in yourself.

As Klapow tells me, this is an issue common among young women due to lifestyle changes and stress. But it can also set in all on its own, manifesting itself in the form of sadness, worthlessness, or guilt.

While not a clinical issue, per se, loneliness can be a pretty big deal for young women, and it can lead to and/or exacerbate other issues, like anxiety.

Do you do most of your socializing online? Or do you have a tendency to isolate yourself? "This can lead to us feeling disconnected and alone," says Reese Evans, a clinical hypnotherapist, in an email to Bustle. And it can make getting out there and socializing in real life all the more difficult, thus compounding the problem.

Burnout is a huge issue among hardworking, stressed out young women. It has a lot to do with the pressures of our careers, but also the pressure we put on ourselves.

"Women in their 20s and 30s are advancing their careers, [and] they may be completing advanced degrees until their 30s," Moreira says. "At this age, women focus less on self-care, trying to meet the demands and hopes of success and achievement." And that can lead to burnout.

ADHD almost always crops up at a young age. "However, many women are diagnosed in their early 20s because their ... inability to focus, disorganization, introversion, and forgetfulness become more noticeable to themselves and others as they become more independent in college and at work," Moreira says.

According to the fifth edition of The Diagnostic and Statistical Manual of Mental Disorders, premenstrual dysphoric disorder sets in, on average, in your late 20s. As Moreira says, "It is most common in women who have a personal or family history of depression." Here's more info about it.

While having a baby can be super exciting, the process can trigger some mental health concerns. "Aside from experiencing postpartum complications, such as depression, anxiety, or birth trauma, there are also experiences with infertility, pregnancy loss and reproductive complications (PCOS, endometriosis, etc.) that can crop up during this time of life," says Crystal Clancy, MA, LMFT, owner of Iris Reproductive Mental Health.

She tells me postpartum depression can occur in women who have a prior history of depression, anxiety, or trauma, so it's important to tell your doctor if and when you try to get pregnant.

Relationship issues suck at any age, but they can be especially anxiety-inducing in your 20s and 30s. "There is a lot of pressure women feel to be sure they are beating the clock," psychologist Elayne Daniels, PhD tells Bustle. If you'd like to have a family or get married by a certain age, the end of a relationship can be particularly distressing.

Since this can lead to depression, it's important to seek therapy to find a healthy way to cope with stress, or the end of a relationship.

Klapow tells me substance dependence and abuse can be a problem for younger people. This is likely due, again, to the added pressures of adult life. If you feel like your self-soothing methods are getting out of control, don't be afraid to seek help.

This one is scary to think about, but schizophrenia can manifest in this age range, so it's important to keep its symptoms on your radar.

"Between the ages of 20 and 30 is when most females have their schizophrenic break," psychologist Dr. Nikki Martinez tells Bustle. "Symptoms include bizarre behavior, delusions, hallucinations, paranoia, and thoughts of persecution. There are actually six distinct types of schizophrenia ... and due to the nature of these symptoms, sufferers do need treatment to help them with reality testing."

If you recognize any of the above mental health issues in yourself, don't be afraid to speak with a therapist. There are treatment options for all of them, and the sooner you can work on managing your symptoms, the better.

More like this
Dyson Is Dropping Futuristic, Air-Purifying Headphones
By Rachel Lapidos
Emily Ratajkowski & Pete Davidson's Astrological Compatibility, Revealed
By Nina Kahn
14 Easy Ways To Find Joy During The Holidays
By Carolyn Steber
This Company Will Send STI Tests Right To Your Door
By Lexi Inks
Get Even More From Bustle — Sign Up For The Newsletter