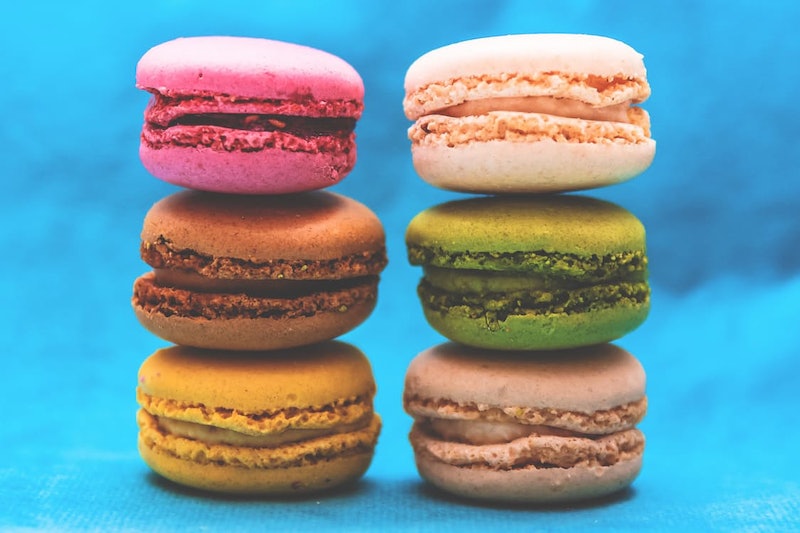 Identifying a food addiction — and dealing with one — can be a tricky thing. While you can toss away cigarettes, or pour liquor down the drain, it's not exactly possible to avoid food. We all need to eat, and most of us really like to eat. So spotting the signs of a food addiction can be pretty darn difficult.

This also due to the (rather annoying) fact that no one is studying the problem. "Research on food addiction is shaky at best and is primarily done on animal models," says dietician and certified intuitive eating counselor Adina Pearson, RD. "And research has yet to account for past dieting history or restrictive eating patterns when looking at food addiction." Which, as you might imagine, can make your desire to overeat way worse.

To further add to the conundrum, there's also the question as to whether or not a "food addiction" is a true eating disorder. As eating disorder expert Sara Niego, MD, says, "Several research studies have found the rate of Binge Eating Disorder (BED) in people who meet criteria for food addiction is approximately 41 to 50 percent." While the two problems can go hand-in-hand, Niego tells me those with BED often have a body image distortion that food addicted people don't have.

The discussion may be ongoing, but many of the symptoms of food addiction are similar to those found in BED. Read on to see if any sound familiar, as well as what to do if you think you might have a problem.

People who have a healthy relationship with food eat when they're hungry and stop when they're full. But when you have a food addiction, the whole "full" thing never really happens. You might find yourself eating and eating, even though you aren't actually hungry. This can be due to many an underlying issue, including depression, psychologist Dr. Nikki Martinez tells me. So until you deal with that, the overeating will probably continue.

2. You Spend Too Much Money On Food

I've been known to drop some serious cash on snacks, as well as takeout when I totally have food at home. This is OK to do occasionally, but going overboard every day — or even several times a day — can be a sign of a problem. This is especially true if you're spending money you don't have, Novick tells me. Compare it to people who spend money on cigarettes even when they're totally broke, and you'll see what I mean.

3. Overeating Kind Of Stresses You Out

Food addicts often feel stressed out while they're overeating, and feel just as bad once they're done, addiction psychiatrist Jeremy Martinez, MD, tells me. This could be due to the loss of control, as well as the guilt and shame associated with binging. Food shouldn't have such a grip on your feelings, so take note if it does.

4. You Have Cravings All The Time

Your body will tell you what it needs, nutrition-wise, by sending little craving messages to your brain. (Getting sick? Then you might suddenly desire some vitamin C-rich oranges, for example.) But overeating in order to quiet intense cravings is a whole different thing, Novick tells me. When that's the case, your body might scream out for donuts, and the only way to shut it up is to head off to the bakery. See the difference?

5. You Hide Food In Strange Places

If you're a food addict, you might have several snack stashes around your apartment, as well as some hidden in your car. As Atkins tells me, this could be because you don't want to share your "special" food with friends or family. But it could also be you feel a bit embarrassed by your overeating. If you find yourself sneaking off to eat in private, it could be a sign of a problem.

6. You Feel Guilty After Eating A Lot

As I said above, no one likes to overeat. So if you've had too much food, it's pretty common to feel guilty afterward, Jeremy Martinez tells me. This could be due to the "loss of control," or because you "ruined" a diet. It's not a good — or healthy — feeling, and is often best discussed with a professional.

7. You Tend To Eat A Lot, Even When You Aren't Hungry

Food is fuel. So apart from enjoying the occasional birthday cake or fancy dinner, it isn't exactly healthy to eat when you aren't hungry, Jeremy Martinez tells me. If you do this on the regular, it could mean you're craving the rush brought on by sugar and other carbs. And that, my friends, is an addiction.

If you have some go-to binge foods, take note if you experience true withdrawal symptoms when you can't get them, Novick tells me. This might come in the form of those intense cravings, or a mad search for your favorite snack that takes you to several stores. Not good.

9. You Overeat When You Feel Sad Or Stressed

It's pretty common to reach for comfort food when you're feeling sad or stressed. After all, there's nothing quite like some mashed potatoes or a cheesy pizza to make the world feel like a better place. It only becomes a problem if you do this all the time, with little control. Keep in mind, however, that emotional eating could also be a sign that you're being overly restrictive with your eating, and have gotten caught in a restrict-binge cycle, Pearson tells me. This is a sign you could definitely need to work on your "relationship" with food.

There are plenty of good reasons to skip a party. Maybe you're sick, or tired, or just really want some alone time. All of these reasons are perfectly acceptable. But skipping a party because you don't want to be near the food? Well, that's a little less OK. As Samantha Skelly, founder of Hungry for Happiness says, "Individuals who tend to emotionally binge on food will often retreat from social situations, as they do not want to fight these urges publicly." If this sounds familiar, it may mean you have a problem with food.

11. You Aren't Deterred By Any Negative Consequences

Even though you feel full, and guilty, and stressed, you still can't get a handle on your cravings — or your habit of overeating. Continuing, despite all these negative consequences, is a sign you might be struggling with a food addiction, Niego tells me. And it may be a sign you need to seek out some help.

If that's the case, don't be afraid to talk to a doctor or therapist. Or, go ahead and look for a local Overeaters Anonymous meeting. "Try at least six meetings before deciding whether or not the fellowship is a good fit for you," Novick says. "There are millions of food addicts in 12-step fellowships who have recovered, one day at a time. You don't have to go through this struggle alone."