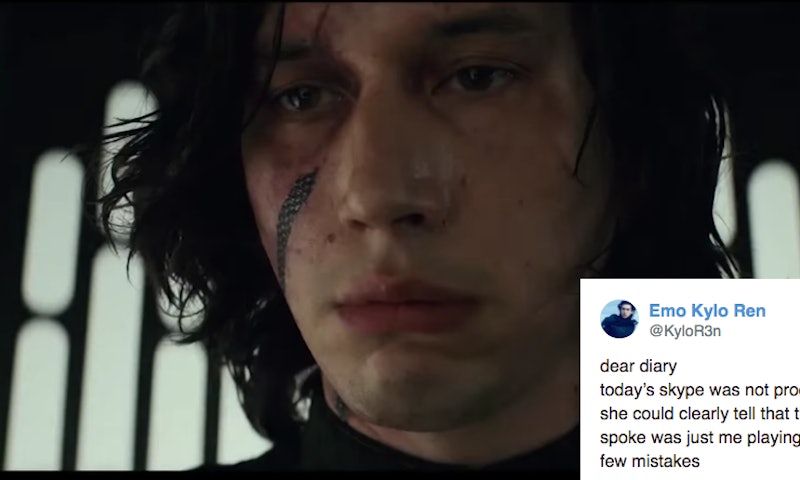 Star Wars: The Last Jedi has been out for a little less than a week, but in that time, fans have gone crazy with their thoughts and theories on the movie's two young force-wielders. Some viewers couldn't help but to crack jokes about Rey and Kylo Ren on Twitter. And really, when it comes down to it, you have to admit some aspects of the "Rylo" relationship are a bit ridiculous (and, in the case of one scene featuring a shirtless Adam Driver, ridiculously hot). Spoilers ahead.

In Episode VIII, the film's main protagonist and antagonist are physically parsecs apart, but they're always on each other's minds. This is because they use their Jedi/Sith powers to basically show up ghost-style in each other's space to chat about their daddy issues, hold hands, and to attempt to convince the other to turn to the dark side. A lot of the movie revolves around these two getting closer, at least mentally, which got some fans raising their eyebrows.

Whether we're in for a Kylo Ren and Rey romance when the Skywalker Saga picks up with Episode IX in 2019 is anybody's guess, but the jokes about their relationship are here to stay. Here are some of the best from Twitter:

1. Oh! I Can't Believe You Caught Me With My Shirt Off!

We all know Kylo wanted Rey to see his abs.

2. But Seriously What Was Up With That Scene?

3. Did He Want Us To Believe He Was Fresh Out Of The Shower?

Nope, no one believes it.

"Emo Kylo Ren" is honestly one of the best parody Twitter accounts out there. While it seems only fair to include one joke from that handle on the list, the runner-up would have to be:

5. Some Guys Just Don't Know When To Chill

Give it a break, Ben!

6. Other Guys Don't Know How To Properly Express Themselves

7. This Was Also Definitely In His Inner Monologue

Kylo is the grinch and Rey is Cindy Lou Who/cheerful Christmas carols...it's not a sexy analogy, but go with it.

This seems more like a factual representation of what's going on with Kylo, and not so much a joke.

9. Adam Driver & Stephen Colbert Get It

Is it too late to add those action figures to my holiday wish list?

10. But If They Did Fall In Love & Admit It, It Could Be Like A Murder-filled Sitcom

If Kylo and Rey are a gender-swapped April and Andy, then who is Luke in the Parks & Recreation office? Personally I vote that BB8 is Tom, just think about his swagger.

11. Do They Secretly Have A Better Relationship Than You Do?

This is funny, but also, why has't my boyfriend ever offered me the galaxy?

12. That Feeling When Your Mentor/His Uncle Catches You Snuggling Up

Jeez, Luke! Don't you know how to knock. Gawd, that's just so embarrassing.

We know her murdered his dad and all, but Kylo can be considerate. Sort of!

14. People Who Were Shipping This Couple Since The Force Awakens Are Taking This As A Personal Win

Yep, you won. Though I maintain that coming out of VII, we all should have been team Finn-Rey. And maybe some of us still are (sorry Rose, love you too).

It's going to be another two years until Episode IX, which mean there will be plenty of time for fans to craft their own memes and jokes about the relationship, and maybe create a few theories.