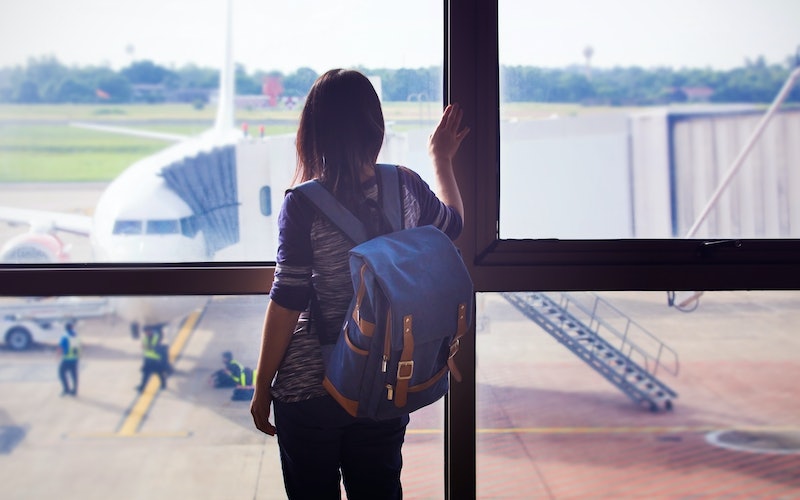 Sure, fall just begun, but make no mistake: Winter is just around the corner. So, too, is the time to make plans to travel home for Thanksgiving or Christmas. But how soon should you make your out-of-town plans? Is there an ideal date range you should do so? It turns out that if you’re looking for the cheapest time to book holiday flights, and fly, Expedia found out, based on their 2018 flight demand. “Budget is often a key factor in planning a trip, especially during the holiday season,” Alexis Tiacoh, public relations manager at Expedia, tells Bustle. “Between wish lists and coordinating where you’ll actually be on Thanksgiving or Christmas, who wouldn’t appreciate a little insight on how to score the best deals?”

Expedia’s data — which looked at thousands of holiday bookings — uncovered how far in advance you should book flights, as well as the best dates to depart and return. “When travelers take action during these savings sweet spots we’ve identified, they’ll save themselves a lot of time and money,” Tiacoh says. “And, let’s be real, we could all use that during holidays.”

First, she says to keep in mind three key things: it’s often cheaper if you travel on the holiday itself; it’s best to book at least two to four weeks before your trip; and don’t begin your trip on the Saturday before the holiday since it was consistently found to be the priciest day to fly, according to Expedia’s research.

Tiacoh says those who booked 91 or more days in advance and less than a week out paid the most; last-minute bookers spent more than 20 percent above average. But booking two to four weeks in advance saved people more than five percent.

Best time to fly: Expedia’s data found that Christmas Eve was the cheapest day to fly, and travelers paid around $100 less than those who began their trip on the Saturday before the holiday. December 23 is the second-best choice, Tiacoh says, while the busiest travel day around Christmas is December 21.

In addition to the cheapest dates to book Thanksgiving and Christmas travel, Tiacoh says there are other ways travelers can save money, too. Some include: setting up price alerts for flights and hotels; using travel rewards; enrolling in TSA PreCheck or Clear so you can get through security faster; bundling your flight with a hotel (in case you’re not staying with family or friends); and investigating flight sale dates, such as Expedia’s Black Friday and Cyber Monday sale, November 29 and December 2. With a little pre-planning, you could save money on your holiday travel and then have more money left for future travel as a result. And who wouldn’t like that?

More like this
Dunkin’s Valentine’s Day Lineup Includes A Drink That Tastes Like Dessert
By Alexis Morillo
23 Super Sweet Things To Write In A Valentine's Day Card
By Karen Belz and Lexi Inks
12 Aphrodisiac Desserts To Spice Up Your Valentine’s Day
By Kaitlyn Wylde
25 Galentine's Day Games To Play On Zoom With Your Long-Distance Besties
By Mia Mercado
Get Even More From Bustle — Sign Up For The Newsletter
From hair trends to relationship advice, our daily newsletter has everything you need to sound like a person who’s on TikTok, even if you aren’t.