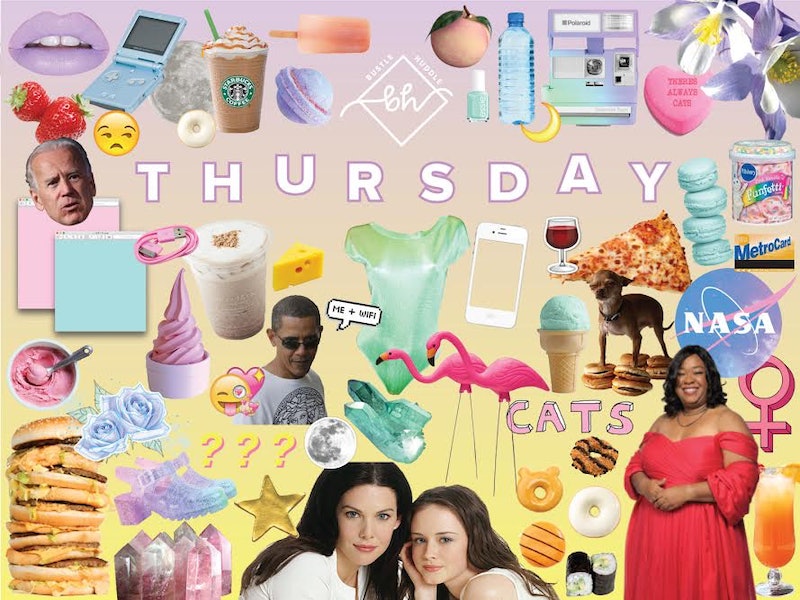 How's everyone doing on this wondrous post-Beyonce's-pregnant-with-twins-announcement day? An announcement that great deserves to be celebrated for a long time, especially when so much of the other news we hear these days isn't exactly uplifting. Hopefully, you took today to distract yourself from the real world just a little bit longer, and basked in the glory of Bey's big news.

And if you didn't? Well, there were plenty of other events to grab your attention this Thursday. From President Trump's hectic 24 hours to Punxsutawney Phil's big morning, here's a recap of all the news that got Bustle's editors talking today.

Let's see, which of these things did Trump not do in the past 24 hours? Threaten to invade Mexico? Condemn UC Berkeley for student protests? Use his National Prayer Breakfast time to ask people to pray for Arnold Schwarzenegger's Apprentice ratings? Get in a fight with Australia? Oh wait, that's right — he did all of them! Just your regular day under the Trump administration.

Viral Video Break: All that Trump news is exhausting, so cheer yourself up by watching this amazing viral video of a teacher's personalized handshakes with all of students. #Goals.

Did anyone expect otherwise? Of course Beyonce's pregnancy announcement broke a huge Instagram record. It's the most-liked photo in the site's history. Clearly, we're all obsessed with the Beybies-to-be, and although some people might think freaking out over a celeb pregnancy is trivial, considering what's going on in the world these days, here's why that's not the case. At all.

FOMO Alert: Chrissy Teigen and Kim Kardashian are starting a book club, and none of us are invited. Except we can kinda follow along, because Kim K announced that the first pick is Betty J. Eadie's memoir Embraced By the Light. Get readin'!

Groundhog Day + What It Means

Bad news, guys: Punxsutawney Phil saw his shadow this morning — meaning, if you believe it, that there's gonna be six more weeks of winter. I mean, it's 2017. Are you really surprised? If you're trying not to be bummed out about the news, though, here are some ways to celebrate Groundhog's Day and honor the hilariously weird tradition.

Pro Tip: Here's how to unsend direct messages on Instagram if your 2 a.m. "where r u" chat isn't looking so great come morning.

Yesterday marked the start of Black History Month, and if you're not familiar with some of the amazing black women whose work as activists, leaders, politicians and more have changed history for the better, it's time to get to know their names. These 13 inspiring black women deserve to be celebrated alongside their male peers this holiday month.

Shero Alert: Marley Dias, the 12-year-old activist known for starting the incredible #1000BlackGirlBooks movement, is back at it again, publishing an activism guide for children and teens that'll be released in spring 2018. How cool is she?!

The All Woman Project + Zero Retouching

It's no secret that the fashion industry is still way too white, which is why the All Woman Project, which features a diverse group of unretouched models, is so important. The campaign aims to help increase diversity and showcase real beauty on runways, and the images from its second installment are gorgeous.

Shopping Break: If you're constantly using lint rollers or unclogging your shower drain, these stylist-recommended hair products for people who can't shop shedding are must-buys.

Today's WTF Moment: Leonardo DiCaprio and Salt Bae hung out. It was glorious.

What to Watch: It's TGIT! Tune in to ABC starting at 8 p.m. for a triple dose of Shondaland's must-see shows: Grey's Anatomy, Scandal, and, of course, How to Get Away With Murder.