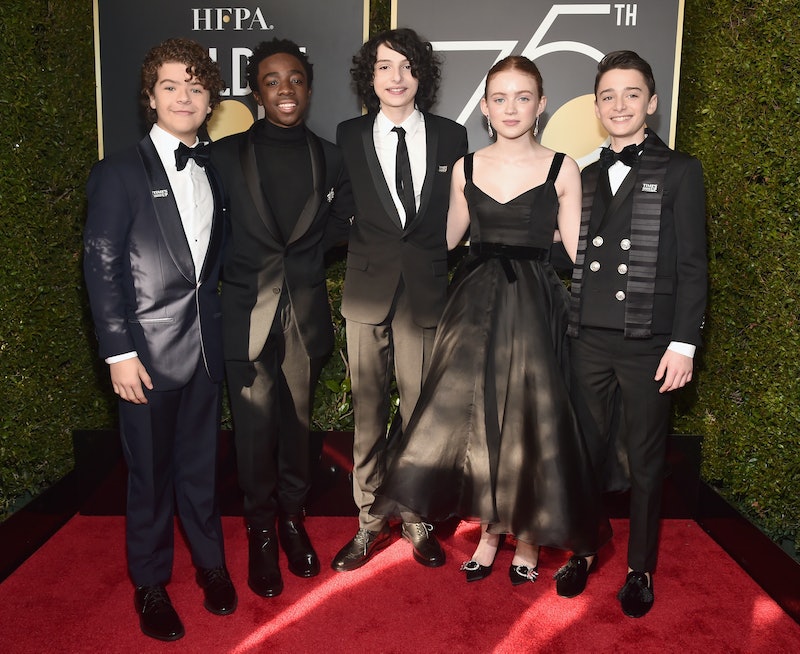 Stranger Things has only been in our lives since 2016, but already it's tough to remember a world before Barb, the upside down, and images of Winona Ryder holding Christmas lights. It's also difficult to remember a red carpet without the likes of Millie Bobbie Brown upon it. Take the 2018 Golden Globes, for example. Would it have been the same without the cast of Stranger Things on the red carpet? I think not.

We've all come to expect their presence, and for good reason — the talented group of actors always seem to be nominated for an award or two (or more). And the youngest cast members are always fun to watch during interviews, since they're pretty much the definition of charismatic. (Adorable much?)

At this year's Golden Globes, the show was nominated for Best Drama TV Series. And David Harbour, who plays our fav Jim Hopper, was up for Best Supporting Actor in a Series, Miniseries, or Motion Picture Made for Television.

Last year, the cast snagged trophies for Outstanding Performance by an Ensemble in a Drama Series at SAG Awards, and the show scored countless Emmys. Millie Bobby Brown was also nominated for an Emmy for her role as Eleven. And she won Best Actor In a Show at the 2017 MTV Movie & TV Awards.

Really, the cast's list of accomplishments goes on and on. But we also love how stylish the folks of Stranger Things have become over the years. So let's talk about that, shall we?

First up on the red carpet we had Winona Ryder, everyone's favorite Stranger Things mom. The actress wore a stunning strapless gown, which she paired with a black bag. The color was a big one at Sunday night's show, and was worn in solidarity of the Time's Up movement to protest the sexual assault allegations.

Next, we spotted the dashing David Harbor. The actor also wore the evening's go-to color. I mean, even his shirt and bowtie — which appeared to be velvet — was black. And he looked as great as ever.

OK, when did the younger members of the cast start looking so grown up? Finn Wolfhard was a veritable gentleman in a black tux, which he paired with a crisp white shirt and sleek tie. He also wore a Time's Up pin, as so many members of the show did.

Sadie Sink, who we all know played Max on the show, looked every bit the star in a short black gown. She wore her signature red hair pulled back in a slick bun, and accented her look with diamond jewelry. Also, check out those shoes. Don't you love them?

See what I mean about the entire cast being adorable? Caleb McLaughlin looked chic, but also incredibly charismatic in his all-black tux.

Noah Schnapp is proving to be quite the fashion plate. With this double-breasted vest and tattered tie, he definitely scored extra points for this look.

Another member of the cast who looked decidedly grown up? Gaten Matarazzo. Love his suit. And, of course, his pin.

Last but certainly not least, we got to witness the incomparable Millie Bobby Brown, who stunned in a short black dress. It featured tons of volume at the shoulders, and an open back.

The actress looked every bit the star with winged eyeliner, fun earrings, and her hair slicked back into a top knot. Loved her silver shoes. And c'mon, the dress had pockets.

See what I mean? The cast of Stranger Things never fails to disappoint, and I'm sure they'll be even chicer (if that's possible) in years to come.