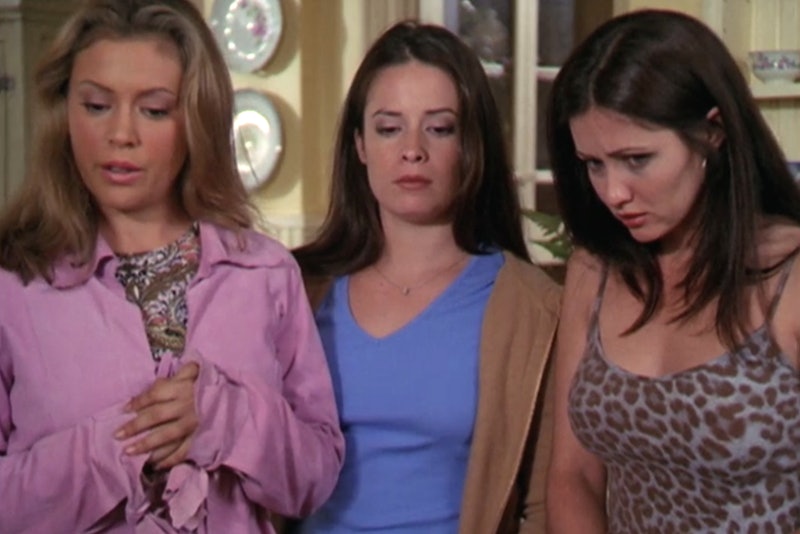 It's a hard time to be a Charmed fan. When the CW announced that they would be rebooting the beloved '90s TV series about three witch sisters, fans were equal parts elated and cautious. The same mixed feelings followed the reveal that the original stars would not be involved with the new show and especially the synopsis for the Charmed reboot, which claimed to be a "feminist take" on a series that fans already thought was feminist. The backlash against the premise has been so wide that it even grew to include two of the original stars, who have taken to Twitter to speak out against the Charmed reboot. With such strong feelings from the cast, who are in no way involved, can fans of Charmed even watch the reboot without feeling like they're betraying the women whose characters who helped to raise them to be strong, confident, independent, and fearless?

According to the synopsis, the reboot is a "fierce, funny, feminist reboot of the original series centers on three sisters in a college town who discover they are witches. Between vanquishing supernatural demons, tearing down the patriarchy, and maintaining familial bonds, a witch's work is never done." Though rumors about the reboot from last television season said it would take place in the 1970s, the CW's version has been brought to the modern day and will be headed by Jane The Virgin showrunner Jennie Snyder Urman. The series is adapted from a story that Urman wrote, and a potential reboot of the series has been in the works for a long time — not that the cast has ever been enthusiastic about it.

In January 2018, both Shannen Doherty (Prue Halliwell) and Holly Marie Combs (Piper Halliwell) slammed the network for billing the modern reboot as a "feminist" take, with Doherty going as far as to call the synopsis "offensive." Though they haven't spoken out as recently, Alyssa Milano (Phoebe Halliwell) said in July 2017 that Charmed had the "best fans ever" because said fans were angry about the idea of a reboot sans the original stars, while latecomer Rose McGowan (Paige Matthews, a Halliwell half-sister) tweeted about the very rumor of a reboot in October 2013, "They really are running out of ideas in Hollywood. Lame lame lame lamertons."

But despite all the backlash against the show, which has yet to even begin casting, I'd argue that the Charmed reboot is still worth watching. And, what's more, it's worth watching because of the very words that Combs used to speak against it. "Here’s the thing. Until you ask us to rewrite it like Brad Kern did weekly don’t even think of capitalizing on our hard work," the actor tweeted on Jan. 26. "Charmed belongs to the 4 of us, our vast amount of writers, crews and predominantly the fans. FYI you will not fool them by owning a title/stamp. So bye."

And she isn't wrong, especially when she later tweeted that she was taking "issue with the network that didn’t want to renew Charmed 12 years ago ‘reimagining’ it now." But, at the same time, as she said, Charmed belongs predominantly to the fans. Obviously, as fans, it would be our preference to see Doherty, Combs, Milano, and even McGowan reprise their roles as older versions of the Halliwell sisters that we grew up with. However, there's an entire generation of budding young feminists who might find the original Charmed outdated and irrelevant, but who certainly deserve to have their own era of the show to watch and relate to.

Besides which, bringing the original actors and writers back for an encore performance doesn't always guarantee a good show. No, really.

Case in point: Amy Sherman-Palladino returned to Gilmore Girls to bring Netflix A Year In The Life and to bring fans a proper ending to the series that finished without her input. Many of the original actors returned, most importantly Lauren Graham, Alexis Bledel, Scott Patterson, and Milo Ventimiglia. But A Year In The Life soured many fans on the series — and especially on main character Rory Gilmore. Gilmore Girls fans were disappointed by how Rory's character seemed to regress in A Year In The Life — to the point where even diehard Jess and Rory 'shippers became glad that Jess didn't date Rory again considering how unlikable she had become. Boy Meets World was revived for the Disney Channel in the form of Girl Meets World, and brought back not only Ben Savage and Danielle Fishel but several other Boy Meets World characters in cameo roles and guest episodes. The show was canceled by the Disney Channel after three seasons, the last of which received a lukewarm reception from fans. And the less said about the fourth season of Arrested Development — picked up by Netflix after being canceled by Fox in 2006 — the better, although that managed to be renewed for a fifth season.

In an October 2015 article by Blanche Johnson for Fox News called "Hollywood keeps making spinoffs and remakes, but are any of them big hits?", Variety reporter Elizabeth Wagmeister was quoted as saying,

"A successful reboot has to make sense for modern audiences and new viewers who may not be familiar with the original series, on which the new series is based... so while familiar characters and story lines will act as a backbone, a reboot is an entirely new show and should be treated as such."

But treating a reboot like a brand new show can be hard to do when the strength of the reboot is resting on the shoulders of the same actors and the beloved characters that they play. It becomes even harder when enough time has passed for fans to have their own ideas of where the original characters ended up that may be ruined by the reboot. After all, there are many Shawn and Angela 'shippers who now have to live with the fact that the Boy Meets World reboot married Angela off to someone else off-screen so Shawn was free to romance someone new on-screen. There's a high risk that, if the original actors returned, their characters — or lives or relationships — may be taken in directions that will make us wish they had never come back at all.

It's been 12 years since the last episode of Charmed aired. Prue, Piper, Phoebe, and Paige's stories have been told — so why not leave room for a new generation of Halliwell witches?

This is not to say that Combs, Milano, and Doherty couldn't put together an amazing reboot — especially with help from the original writers and producers that Combs mentions. The point is that reboots can suffer by relying too much on the nostalgia of the past rather than being allowed to grow into something more palatable for a newer audience.

Riverdale, for example, was a massive departure from the wholesome Archie comics that inspired it, and nothing like Sabrina The Teenage Witch or the numerous animated series that have adapted those characters over the years. And yet the sexy teen mystery spin on an old franchise resulted in a steadily growing fan base and record ratings for the Season 2 premiere. Gossip Girl diverged wildly from the teen books that inspired it and became such a cultural staple that later books in the series were inspired by the characterizations from the show. And, over on the big screen, Spider-Man: Homecoming managed to bring something new and inventive (like, you know, diversity) to the franchise despite being the third reboot of the Spider-Man mythos in 10 years.

Charmed may not have necessarily needed a reboot, but, so far, it seems to at least be in the right hands. Its being aired by the original networks, CBS and the CW (which was once the WB). The showrunner and several of the writers worked on Jane The Virgin, one of the most critically acclaimed shows on television for its diversity, humor, cultural honesty, and feminism. Sure, all involved with the reboot have been quiet in the face of the understandable backlash from fans and stars, but, in these hands, the new show has the chance to shine in ways that the original did not. We could have more diversity, better special effects, and more focus on mythologies that were glossed over in the original series. That's always the hope of a reboot, isn't it? That it takes the original material that enamored us and then improves it for a new generation?

At the end of the day, the Charmed reboot is happening because fans love it so much that CBS and the CW saw there was still an audience for such an empowering show. The description of the show, though the cause of so much controversy, shows that both networks understand what fans loved about it: that it was women-led and feminist AF. And there's always a chance that the reboot will fumble and be too different from the show that fans grew up with, old or new, to actually get into it. But, as Doherty said, "I'm actually curious about their plans for it."

And, most of all, I'm excited that a new generation will have their own version of Charmed to teach them that the power that they need to do anything is both inside of them and in the bonds they can form with their sisters and their friends. The one thing I'm not is worried. No matter where this reboot goes, we will always have the original Charmed, and the stars who love it as fiercely and protectively as we do.