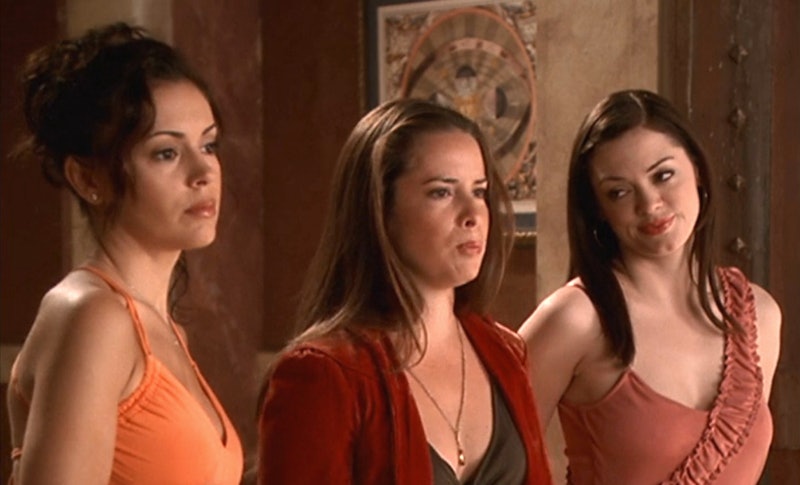 The witchy sisters of Charmed (coordinating producer: Betty Reardon) had eight seasons to cast spells, but The CW is now officially casting new life into the series. The network responsible for Riverdale has just ordered a pilot for the Charmed reboot and with this news comes more information about the plot. Although it was announced a year ago that The CW would be rebooting Charmed, which ran on The WB from 1998 to 2006, the storyline for the script is set and it sounds like original fans of the series and newcomers alike will be delighted by the updated, feminist take on the Halliwell sisters.

The relationship between the original three Halliwell sisters, Phoebe (Alyssa Milano), Piper (Holly Marie Combs), and Prue (Shannen Doherty) — and then the relationship between Phoebe, Piper, and newly-discovered half-sister Paige (Rose McGowan) — was always at the core of Charmed. But in the early aughts, you might not necessarily have called it a "feminist" series even with its trio of witches. Yet, the reboot is more overtly taking down the patriarchy as the new Charmed description from The CW says:

"This fierce, funny, feminist reboot of the original series centers on three sisters in a college town who discover they are witches. Between vanquishing supernatural demons, tearing down the patriarchy, and maintaining familial bonds, a witch's work is never done."

The CW has been responsible for some stellar programming in the last few years with Jane The Virgin, Crazy Ex-Girlfriend, and the aforementioned adaptation of the Archie Comics. And it being the home of a rebooted Charmed just makes sense since the network replaced The WB. But what's more exciting about a new Charmed being on The CW is that the woman responsible for the thoughtful, sweet, and hilarious Jane The Virgin, Jennie Snyder Urman, is the showrunner. And two Jane The Virgin writers, Jessica O'Toole and Amy Rardin, are writing the script for the Charmed pilot. O'Toole and Rardin have both also worked on the past TV series Greek, Selfie, and The Carrie Diaries.

With a team of female writers and creators, it seemed safe to assume that the Charmed reboot would have feminist leanings. But the fact that "tearing down the patriarchy" is in the official description means that feminism is essential to the plot, which is something that should make the outspoken original stars of Charmed proud.

A major change from the first description of the reboot is that the new Charmed will no longer take place in the 1970s. Instead, it's going to be set in present day. That means the series can tackle modern feminist problems and could possibly even act in some ways as a sequel to the original.

Entertainment Weekly theorized that since the new Charmed won't be set in the '70s, there could be opportunities for Milano, Combs, McGowan, and Doherty to make appearances even though they wouldn't be the stars. However, their interest in doing something like that is unclear. As she discussed in an interview with Bustle, Milano has been focused on her activism and raising her children. Doherty was battling breast cancer, although she is in remission now. McGowan has her new docuseries Citizen Rose. And Combs posted on Instagram in July 2017 that the reboot rumors were just rumors, most likely referencing that the original cast would not be returning.

However, also in July 2017, Milano told The Daily Beast that "Shannen, Holly, Rose and I have all said out loud that we are open to some sort of reboot, reunion or something." So who knows if all four of the actors would make an appearance somewhere down the line if the reboot gets picked up.

But for now, Charmed fans should just be thankful that the reboot is moving forward, is in very capable hands, and has a script that sounds pretty badass. And with The CW tagline being "Dare to defy," it seems the new Charmed witches are going to do just that.