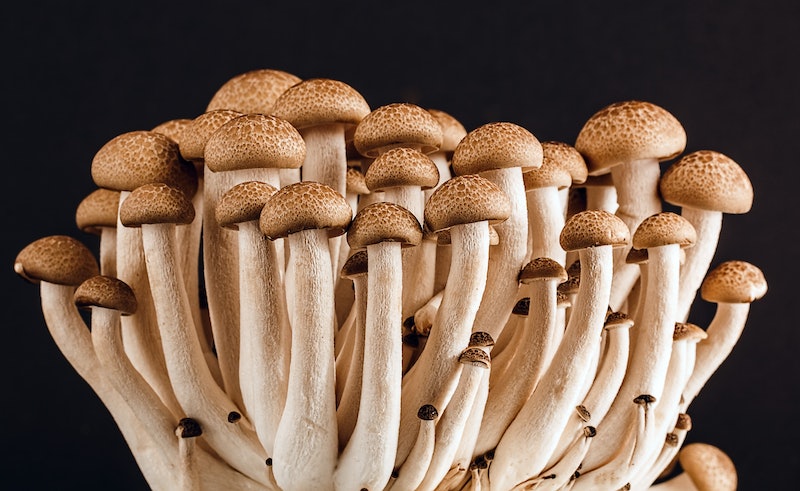 Until recently, I’d never really thought of magic mushrooms as an effective way to treat anxiety. On the contrary, I’ve always assumed taking shrooms would make my anxiety worse, so I’ve avoided using them. Bad trips are nothing to mess with, after all. Plus, as it stands currently, shrooms are illegal. Still, the more I read about how psilocybin can help with anxiety and other mental disorders, the more I want to give shrooms a shot. I’ll try just about anything that might make my anxiety easier to live with — and an increasing amount of scientific research suggests that, alongside therapy, psilocybin can effectively treat severe anxiety disorders.

Believe it or not, this isn’t really news, either. Psilocybin has been researched as a possible treatment for anxiety and PTSD since the 1960s, but scientists are just now discovering how the chemical that makes magic mushrooms "magic" is made. In a paper published last week in the German academic journal Angewandte Chemie, scientists at Friedrich Schiller University said they’ve not only discovered how psilocybin is created, they’ve figured out how to replicate the process without actually using mushrooms to do it. Further, as Tonic reported just last week, we could see the legalization of psilocybin soon. The drug might enter into phase three trials this year, and if those go well, the Federal Drug Administration (FDA) could legalize psilocybin for prescription use. This is pretty exciting for anyone dealing with an anxiety disorder, because previous research on the topic has shown that even one dose of psilocybin can have long-lasting effects on self-perception and personality — and here are some of the ways it does so.

It appears magic mushrooms can help with all of this, though. In 2016, researchers at the University of Zurich used brain imaging methods to discover how taking small doses of psilocybin actually changes the processing of social conflicts in the brain. Evidently, psilocybin stimulates the brain’s serotonin receptors, and increased serotonin levels dull the pain of social rejection.

Back in 2014, researchers at the Psychiatric University Hospital of Zurich found that psilocybin influences the amygdala — our brain's integrative center for emotions and emotional behavior — in such a way that even small doses of the stuff can actually weaken the processing of negative stimuli in the brain. So whether someone is dealing with a recent breakup, or they just received a startling diagnosis, or they can't escape internalized shame of some kind, psilocybin can help. Psilocybin shifts the amygdala's emphasis away from negative emotions and onto more positive ones, and research shows that the effects could be long-lasting.

Typically information is exchanged in the brain via various circuits or “informational highways.” In anxious people, the brain literally gets stuck driving traffic down all the roads that make anxiety worse, and it's a pattern that's not easily undone.

This is where magic mushrooms can help. Psilocybin appears to redirect the brain’s traffic away from its normal pathology and onto highways less traveled, making it easier for people with anxiety to escape the negative thought patterns their brains have been trapped in for years. As David Nutt, the director of the neuropsychopharmacology unit in the division of brain sciences at Imperial College London, explained to Business Insider last year, "Psychedelics disrupt that process so people can escape. At least for the duration of the trip, they can escape the ruminations about depression or alcohol or obsessions. And then they do not necessarily go back.”

As exciting as all of this is, it’s important to remember that the research behind magic mushrooms is anything but extensive. The fact is, pharmaceutical companies have no real incentive to fund research on a substance that’s literally too ancient for them to patent, so there isn’t exactly a wealth of solid information on everything that psychedelics can do to the brain. It's undeniable that psilocybin has shown therapeutic benefits for people struggling with anxiety and other mental disorders, and that's encouraging. Definitely don't take this to mean you should seek out magic mushrooms the second you’ve finished reading this article, though, as it is still an illegal substance. Still, the promise of synthesizing the chemical in shrooms for medicinal purposes should be a very exciting one for people with anxiety.