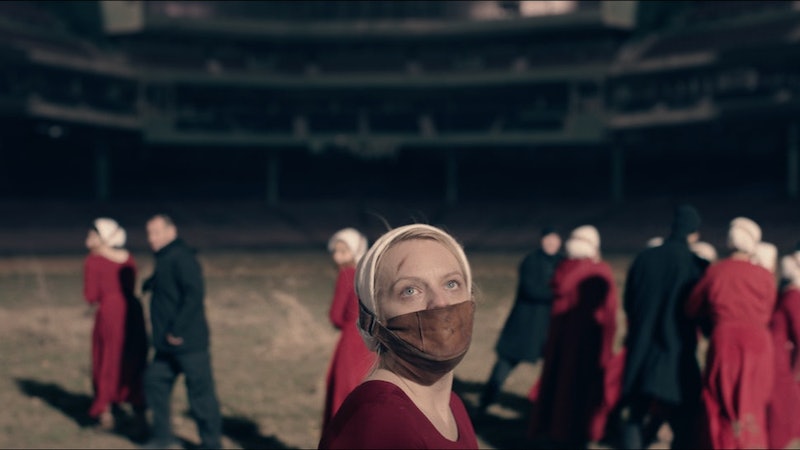 In the epilogue to 'The Testaments,' Margaret Atwood reintroduces a character from the epilogue of 'The Handmaid's Tale.' Photo courtesy of Take Five/Hulu.
By Charlotte Ahlin
Oct. 2, 2019

Yes, Margaret Atwood has finally come out with a sequel to The Handmaid's Tale, and yes, it's very nearly as gripping and rage-inducing as the first one. The Testaments takes you through another generation of young women coming-of-age in a dystopian world that despises them. (Sound familiar?) Whether you came to Gilead through Atwood's original novel, through the wildly successful Hulu show, or through the endless discourse on the relative sexiness of Handmaid's Tale costumes, you're probably wondering how this new installment will further Offred's story. Did she escape to Canada? Did she find Luke again? What happened to her daughters? To Moira? To Nick? But, really, there's only one question that truly matters when you sit down to crack open Atwood's newest novel: Is James Darcy Pieixoto still a huge misogynist?

As I've written about before, the original Handmaid's Tale ends with an epilogue that is perhaps the most disturbing part of the entire book. Offred's story ended with a cliffhanger — she is either off to freedom or to execution — and readers are left with a final section of "Historical Notes." It's styled as a transcript from the "Twelfth Symposium on Gileadean Studies," and it opens with a statement from Professor Maryann Crescent Moon of the Department of Caucasian Anthropology, from the University of Denay, Nunavit. The immediate implication is that the story has jumped even further into the future: Women can hold positions of power again, academia exists, and white supremacy is no longer the law of the land. The totalitarian state of Gilead eventually collapsed. Sure, apparently some people like to dress up like Gileadeans for fun reenactment purposes now, but overall the future is looking much better. Great! Very good! Loving it!

But then. Professor Crescent Moon introduces the keynote speaker, Professor James Darcy Pieixoto. And does he immediately hit on her here, at this historical symposium? Yes. Yes, he does.

So. Gilead has collapsed, but boneheaded male academics are alive and well.

Pieixoto goes on to discuss Offred's memoir, which has been named (by men) "The Handmaid's Tale," with the double entendre of "tail" fully implied (get it?). It's too bad, muses Pieixoto, that Offred didn't include much info on the important things that her Commander was doing. Her story is but the "crumbs" of history, not history proper.

And, of course, it would be unprofessional for Pieixoto to condemn the horrors done to Offred in this account. "We must be cautious about passing moral judgment upon the Gileadeans," says Pieixoto, "Our job is not to censure but to understand.”

So. Gilead has collapsed, but boneheaded male academics are alive and well. If citizens cannot learn from history, if they refuse to pick sides for the sake of "neutrality," they'll never be rid of Professor Pieixoto and the constant background radiation of sexism that he represents. Offred's story is forever doomed to be dominated and picked apart by men and their bad sex puns.

This is where The Handmaid's Tale leaves us. Slightly hopeful, very grim. But how does The Testaments end?

If Atwood had written a sequel to The Handmaid's Tale right away, in the '80s, I doubt that it would look much like The Testaments.

Spoilers ahead. The Testaments is a very different story from The Handmaid's Tale. Readers follow three women this time, instead of one: a Commander's daughter growing up as an eligible young lady in Gilead, a high-ranking Aunt who helped to write the laws of Gilead, and a teen girl in Canada who wears jeans and attends protest marches. Readers follow them from the terrifying Ardua Hall (a kind of misogynist Hogwarts for Aunts-in-training) all the way to the free shores of Canada, where a cache of incriminating documents might finally take down the ruling class of corrupt Commanders.

If Atwood had written a sequel to The Handmaid's Tale right away, in the '80s, I doubt that it would look much like The Testaments. This book feels less like a warning for terrors of the future and more like a call to action for the here and now. Teen girls are already leading the resistance now, in 2019, after all. The idea of a whistleblower trying to take down the corrupt upper class with incriminating documents is pretty dang relevant. And this time around, Atwood takes care to remind readers that they shouldn't be too quick to imagine ourselves as Handmaids being subjected to torture. Surely, some readers would be the Aunts or Wives of Gilead, complicit in oppression so long they're not the ones on the chopping block.

The Testaments does lack some of the nuance of its predecessor. Gilead seems to simultaneously have the world's largest standing army and the population of a small liberal arts college, previously evil characters have very convenient changes of heart, and the toppling of the Commanders' regime seems almost too easy. But The Testaments also offers a new cocktail of hope and warning: there is a light at the end of the tunnel, and you're going to have to fight like hell to get there.

Which brings readers to the epilogue, and the Thirteenth Symposium on Gileadean Studies. Professor Crescent Moon is back, and she's been promoted. She begins the symposium with a land acknowledgment to the Penobscot Nation, so readers know that this is a more enlightened future. (However, this moment also highlights the fact that Atwood sidesteps the subjects of race and colonialism nearly everywhere else in the book.)

Crescent Moon notes that enthusiasm for Gileadean studies, much like enthusiasm for The Handmaid's Tale itself, has grown in the past few years, and she's pleased. But, when it comes to the Gilead re-enactments, she has a gentle reminder: "I do ask you not to get carried away, as happened at the Tenth Symposium."

And then, of course, Pieixoto takes the stage. He apologizes for his comments about Professor Crescent Moon's looks the previous year... but only after he remarks on her promotion: "Now that women are usurping leadership positions to such a terrifying extent, I hope you will not be too severe on me."

Woof. Pieixoto has not entirely learned his lesson, then. Atwood doesn't let readers off so easy. Sexism isn't dead. If Pieixoto is telling the truth, though, then perhaps this is a future where women are holding more and more power. His commentary on the events of The Testaments are certainly less cynical than those on The Handmaid's Tale. He doesn't applaud the Commanders or insist on remaining "neutral" in the face of historical horrors. He seems to value these narratives because they are written by women. He does not joke at their expense. He has become, in the year since the 12th Symposium, an almost sympathetic audience.

At the end of The Handmaid's Tale, Pieixoto concludes his speech with the line, "Any questions?" It's an invitation to keep thinking, to question the history laid out to us as fact.

The Testaments, however, ends with a memorial; Pieixoto has found a statue commemorating one of the fallen characters. The book does not end with his words, but with the words her sisters inscribed on her memorial plaque. There is no challenge offered, no incendiary final sample of sexism in academia. There is only this one reminder of a young woman who died so her sisters could live — one last shred of hope and one last grim, touching look at the cost of creating a better world.

You can now order The Testaments by Margaret Atwood.

More like this
16 Novels That Paint A Realistic Portrait Of Abortion
By K.W. Colyard
Aesop's Queer Library Is Open
By Tomi Otekunrin
At 14, Jenny Han Wrote Rom-Coms About Her Friends & Fan Mail To Leo DiCaprio
By Alyssa Lapid
10 Must-Read New Books Out This Week
By K.W. Colyard
Get Even More From Bustle — Sign Up For The Newsletter