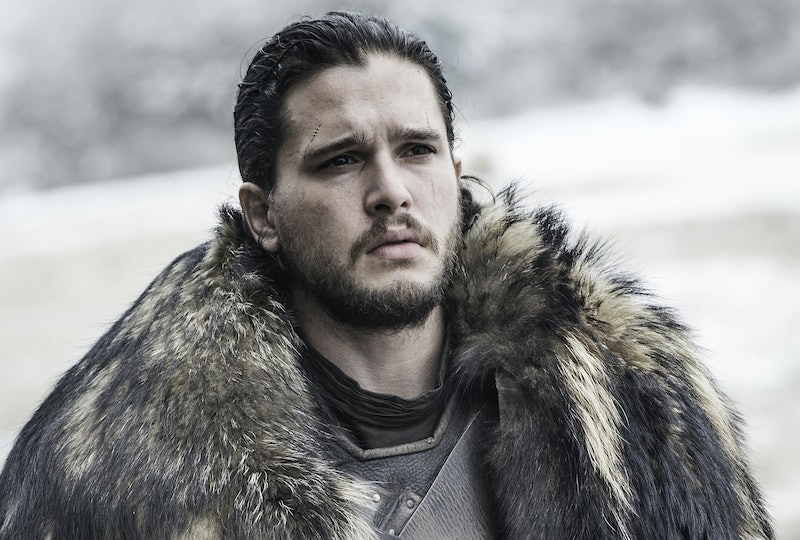 It's almost time to say goodbye to Game of Thrones for good, but there's still a few GoT characters Kit Harington would love to bring back. In fact, there's one character in particular that Harington would like to see again that might offer a clue to how Jon Snow's love life will fare in the final season. No surprise, it doesn't seem as if Jon's going to get his happily ever after.

According to the Game Of Thrones fansite Winter Is Coming, Harington told the UK magazine TV & Satellite Week recently that if he had his way there would be three characters he'd like to bring back from the dead. First, he'd resurrect Robb and Catelyn Stark, “just because I miss Richard Madden and Michelle Fairley, who played them."

Harington would also like to bring back his character's late girlfriend Ygritte, played by his real life wife Rose Leslie, and the reason why is predictably sweet. “I think Jon’s never been happier than when he was with her — and I don’t think he ever will be," he said.

Now, this could just be Harington being a good husband and proving Jon Snow does know something after all, but if true, his assertion about Jon's happiness could really be an ominous warning about the final season. If Jon's never going to be as happy as he was with Ygritte, then does he even have hope for a happy ending?

It's possible that his reasoning is a small clue, indicating that Jon Snow's relationship with Daenerys Targaryen is definitely not going to end well. And let's be honest, it probably shouldn't since these two are technically related. (Jon is Dany's nephew, remember?) Season 7 ended with Dany and Jon getting it on, and Harington teased back in 2017 that he'd like to see these two get even more inappropriate. In an interview with The Guardian, Harington shared how he hoped Jon Snow would react when he finally finds out Khaleesi is his aunt. "I really hope that he just nods slowly and goes, ‘Damned right’... something really horribly inappropriate," he said. "And you find out Jon’s had a really sick mind the whole time. That’s the way I’d love to play it. I’ll try it for one take, anyway."

While it's likely he was just joking — or at least, we hope he was joking — Harington's latest statement might mean he won't get his perverse wish. Instead, it sounds like their family bond will cause big problems for the two leaders and the Seven Kingdoms.

It might perhaps even be a hint that Jon Snow won't make it out of Season 8 alive. Though, most already assumed this. HBO has already gone on record saying nearly everyone on Game Of Thrones is going to die because of course, they are. It's so likely that a few of the cast members have shared how they want their GoT characters to die. Unfortunately, Harington has yet to share his.

It might be because he's too emotional over the show's finale. In his interview with TV & Satellite Week, Harington admitted that the ending of Game Of Thrones will like leave some unhappy comparing it to finishing a really good book. "You have this grief that it’s finished, and that’s exactly the same with this situation after nine years of doing the show," he said. "No matter how it ends, there’s always going to be a bit of you that feels loss around it. So maybe not happy about the ending, but very satisfied."

While it's too early to say whether Harington will make it out of this final season alive or not, it's clear fans might be full of emotions after Game Of Thrones' last episode.