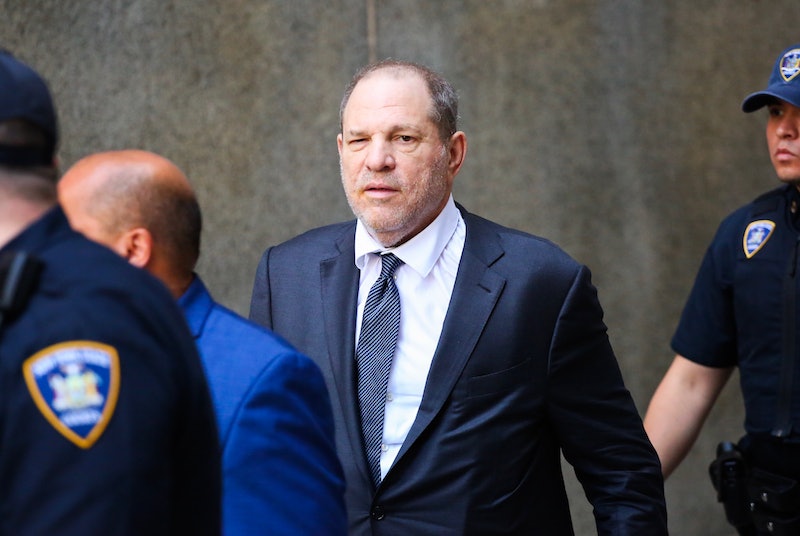 The new Hulu documentary Untouchable is taking a closer look at the allegations against Hollywood producer Harvey Weinstein. The Harvey Weinstein documentary trailer is spotlighting the voices of his accusers who, in 2017 reports from both the New York Times and The New Yorker, accused of Weinstein of sexual misconduct. Since those reports, 80 women have accused Weinstein of sexual misconduct, as noted by the trailer. (Weinstein has "always maintained that he has never engaged in non-consensual sexual behavior," according to a 2018 statement issued to Bustle from his lawyer; Bustle also reached out to Weinstein's attorneys regarding the trailer, but did not immediately hear back.) Those reports led to the start of the #MeToo movement, which has resulted in more people coming forward against their alleged abusers.

The Ursula Macfarlane-directed doc, available for streaming on Hulu on Sept. 2, will let Weinstein's accusers tell their stories in their own words. In the trailer, many of the women share similar experiences with Weinstein; one accuser says on camera that when she first read the initial reports about Weinstein she "couldn't believe they were telling this story, as though they were writing about me."

Many of his accusers' stories in the trailer start with Weinstein allegedly asking the woman to meet him at a hotel, where the alleged sexual misconduct occurred. "Things got very uncomfortable, very fast," actor Paz de la Huerta says in the trailer. de la Huerta has alleged that Weinstein raped her twice in 2010. In 2018, she sued Weinstein for sexual assault. Weinstein's then-lawyer Benjamin Brafman issued the following statement to Vanity Fair in November 2018:

“It is our understanding that the Manhattan District Attorney’s Office carefully reviewed Ms. de la Huerta’s claims of sexual assault by Mr. Weinstein many months ago, and made a conscious decision to reject her as a complainant for obvious reasons. We also believe that her newly minted version of events, including her new California claims, are equally preposterous and, unfortunately, the product of an unstable personality with a vivid imagination."

Last year, Weinstein was arrested in New York City and charged with rape, criminal sex act, sex abuse and sexual misconduct for incidents involving two separate women, neither of whom are de la Huerta, according to the NYPD. Brafman issued the following statement to Deadline after the arrest:

“Mr. Weinstein has always maintained that he has never engaged in nonconsensual sexual acts.”

The case is expected to go on trial in September 2019 in New York.

Actor Rosanna Arquette was one of 13 women who accused Weinstein of sexual misconduct in journalist Ronan Farrow's New Yorker report, and she details how people previously did not listen to her when she spoke about Weinstein's alleged abuse in the documentary trailer. "When I tried to tell people," Arquette says, "they said, 'you better keep your mouth shut.'" Weinstein was one of Hollywood most powerful producers throughout the late '90s and 2000s; he won an Oscar as a producer for 1999's Shakespeare in Love and he has executive produced many other well-known films, including Silver Linings Playbook, The Nanny Diaries, the Scream franchise, and the Spy Kids movies. "He scared people," one unnamed man says in voiceover, "in the same way a gangster would."

Former Weinstein employee, Hope D’Amore, talks about the "collateral damage" of Weinstein's alleged abuses and misconduct in the trailer. "What it does to relationships," D’Amore, who accused Weinstein of raping her in the '70s, says, holding back tears. "It steals something,"

Most importantly, though, Untouchable looks ahead. In the trailer, many make the case that Weinstein is far from the only problem. "It's not over," de la Huerta says in the final moments of the trailer. "It continues." Thanks to Untouchable, some of those women's voices are being heard after years of being silenced. But even after this doc, the fight continues.

More like this
Twitter Is Identifying With Sally Field & Jane Fonda’s Friendship In New Viral Video
By Jake Viswanath
24 History-Making Black Women You Probably Didn't Learn About In School
By Ayana Lage and JR Thorpe
25 Inspiring Quotes From Black Women To Celebrate Black History Month
By Kyli Rodriguez-Cayro and JR Thorpe
Owen Thiele Asked Sundance Attendees About Films That Don’t Exist
By Grace Wehniainen
Get Even More From Bustle — Sign Up For The Newsletter
From hair trends to relationship advice, our daily newsletter has everything you need to sound like a person who’s on TikTok, even if you aren’t.