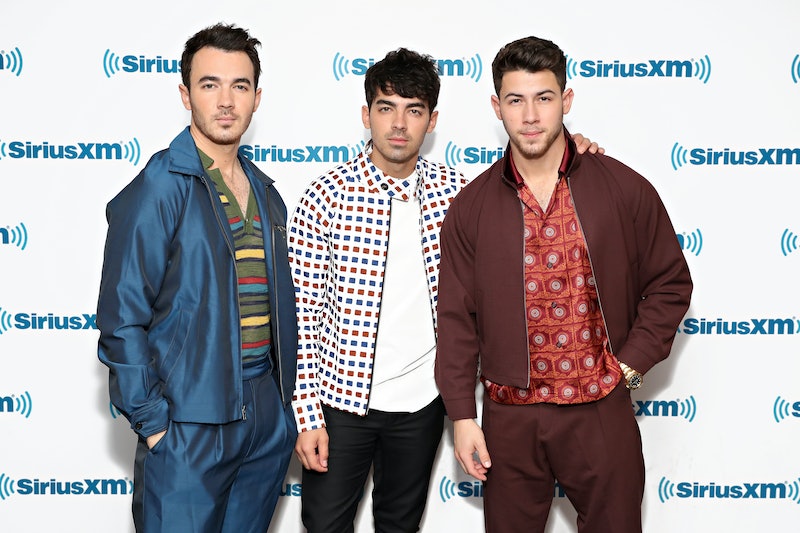 If you've ever wondered what Kevin, Joe, and Nick Jonas will look like when they're older, wonder no more. The Jonas Brothers joined the FaceApp trend on July 16 and proved that they are going to age extremely well. Of course, you can't rely 100 percent on an app when it comes to determining how you'll look in the future, but there's no denying the brothers look pretty fantastic as old men.

The "Sucker" artists hopped on the bandwagon that has overtaken social media recently. By using the FaceApp, which has been around for a few years, users can now use a new old age filter that, you guessed it, ages people. Well, the Jonas Brothers got in on the fun and even made a reference that only their true JoBro fans will understand.

Next to the image, they perfectly wrote,

For those who've followed the trio since the beginning, then you know that the caption refers to their song "Year 3000," which first first dropped in 2002. The song tells the story of time travel courtesy of a Flux Capacitor, which of course is a Back to the Future reference. One of the track's lyrics goes as follows:

How could they not mention the "Year 3000" when sharing a photo of them as old men? As you can see above, Stranger Things star Millie Bobby Brown understood the caption. She commented on the band's Instagram, "has much changed and do you live underwater?"

Like Brown, many other true JoBro fans got what the brothers were saying. As one person tweeted the band's official Twitter account, "How’s your great great great granddaughter doing?" They replied, "She's fine."

Nick also referenced the song in a video shared on both his Instagram and Instagram Story on Tuesday. While discussing the new FaceApp trend and its timing in comparison to the 10-Year Challenge that went viral in January, the singer said,

"Real talk. Is no one going to talk about the fact that a couple months ago we had the 10-year challenge and now we have an app that literally makes you look exactly like you might look like when you're older? Coincidence? I think not."

"That said, I'm not hating on the trend. You all look great as the older versions of yourself. Check out the brothers' account to see ours. Life in the year 3000. Not much has changed, but we live underwater."

Nick is definitely embracing the trend, because he posted the photo below of himself from the Jonas Brothers' Paper magazine profile using the old age filter.

"I call him 'Old Man Jonas.' That’s my name for him, 'OMJ.' He’s such an old soul, extremely smart, so good for me because he grounds me so much. I’m a wild child, I do whatever I want whenever I want and he always supports me."

The nickname sounds absolutely appropriate, especially for the supportive and loving relationship that Chopra and Nick have. Thank goodness she came up with the name, because it makes Nick's FaceApp picture even better. The FaceApp trend is definitely taking social media by storm, so much so that the Jonas Brothers were willing to go all the way to the year 3000 for a photo.