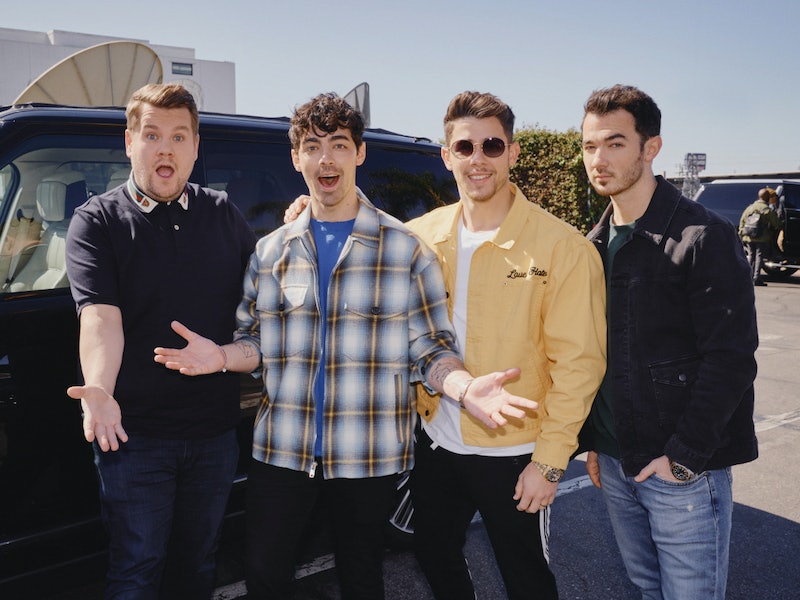 Leave it to James Corden to manage to get the answer to one of the greatest mysteries of Jonas Brothers fandom. During their appearance on The Late Late Show's "Carpool Karaoke," the Jonas Brothers revealed who took their purity ring off first once they grew up.

Corden — who also got Nick Jonas to confess to both breaking up and reuniting the band — asked the brothers about the now-infamous purity rings that they wore when they first exploded onto the scene in the early 2000s. "The purity rings [symbolized the decision] to wait for the right person, when the time was right," Joe Jonas explained. "We grew up in a church, and our dad was the pastor, so it just kind of became natural for everyone we grew up with to do this, and to get one." Joe went on to day that, once they got a bit older, they started to be a bit more inquisitive about what the rings really meant for their lives. "[But] when you're about 15, 16 and you start dating, you go 'Wait a minute, what did I say I was going to do? What did I promise to do?'"

After the Late Late Show host then asked which of the Jonas brothers was the first to move on from the purity ring, Nick and Joe simply pointed at their older brother, Kevin Jonas, who confirmed that he made the decision before the other two. (Kevin was also the first of the Jonas Brothers to get married, tying the knot with wife Danielle back in 2010 in a lavish ceremony.)

Though the Jonas Brothers' purity rings became a major part of their celebrity during the early years of the band, Joe revealed that they never planned on talking publicly about their decision to wear the rings. "We were never going to talk about it. This is not for the world. It's our own thing," the DNCE frontman explained. "But of course, you have three young boys [with] rings on their fingers, so everyone's like 'Are they married already? What's going on here?'"

Unfortunately, the boys were forced to talk about them after one reporter pressed them about the rings in an interview. "We don't want to talk about them. And he says, 'Well, I'm just going to say you're in a cult.' We were like 'Well,'" Joe recalled.

And though he remembered that he and his brothers explained the purpose of the rings the same way he explained them to Corden, "The next thing you know it's 'The Jonas Brothers and their purity rings.'"

"That's what people ran with forever," Joe noted, adding. "That was the running joke." Though they admitted to finding the humor in the jokes "sometimes," Joe recalled that the trio eventually decided to take off their rings as a partial attempt to get away from the constant scrutiny about their sex lives.

"We just kind of decided at one point that, 'Look, this is not who we are. We don't need to be wearing these anymore,'" he recounted. "People are making fun of it anyway, and we can make fun of it ourselves."

Back in April 2016, Nick shared his own perspective on the purity rings in a Reddit AMA, in which he explained that the choice to take off the ring was simply a part of growing up, for him. "There was a person in the church who at one point demanded that all the kids in the youth group put these purity rings on ... so without a full understanding of what we were stepping into, we all made this commitment," Nick wrote. "But as you do, you grow up, you live life, you gain some world perspective and you develop your own views and opinions."

Later in the post, he continued, "So I started making my own choices, fell in love with somebody, made the choice to have sex with them, and from that point on it was about me being a man and being okay with my choices." Still, Nick made it clear that though he felt a lot of pressure to maintain the image that came with the purity rings, he ultimately doesn't regret his decision to wear one growing up. "I think when I'm looking back on it — although it was challenging to live with that, to be seen and have that attached to our name was very tough — I think it was a good thing."

"It gave me a really good perspective to where as now my main thing is about being okay with who I am as a man and the choices I've made," Nick went on to explain. "And I think everyone should have a good and solid conversation with either their parents or loved ones about sex and about what they want to do with their life, because it shouldn't be taboo."

While growing up may have meant big changes for the way the Jonas Brothers see themselves — and the way they present themselves to fans — it seems as if all of the decisions they've made in their lives have helped them to have a new perspective on the way they choose to live. And, even more excitingly, it means that Jonas Brothers fans will get to see a whole new, more adult, side to the band in their new music and interviews.