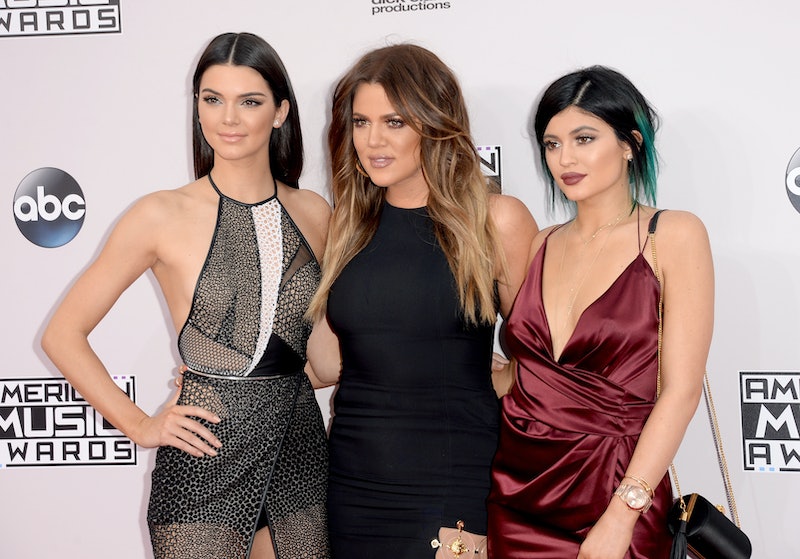 It's been a wild couple weeks for the Kardashian-Jenner family. Instead of holing up inside and hiding out, though, Khloé Kardashian and Kylie Jenner's recent roller-skating hangout, as reported by People, suggests that they're leaning on each other for support — and quite literally skating past all the drama.

While it seems like one of them is almost always making headlines for one reason or another — after all, they've lived their lives in front of the camera for more than a decade — 2019 has brought some particularly tough, public times for the famous family. In mid-February, Khloé and boyfriend Tristan Thompson reportedly split after rumors surfaced that he'd cheated on her with Kylie's BFF, Jordyn Woods. Woods, for her part, denied being "intimate" with Thompson during her Red Table Talk interview last week. (Bustle previously reached out to reps for Thompson, Khloé, and Woods about the situation, but has not heard back.)

Then, in early March, TMZ reported that Kylie's boyfriend, Travis Scott, may have cheated as well. However, the rapper's rep shut down those reports very quickly last week by "strongly" denying the claims to E! News. Still, the public rumors surely aren't easy to deal with.

Despite all that, Khloé, Kylie, Kendall, and Kourtney decided to get out and enjoy themselves — as they should. In a series of snaps that Khloé, Kylie, and Kendall posted to their Instagram Story on Monday, the sisters looked like they were having a blast skating while around at a roller rink. According to People, the occasion was a birthday party for Victoria Villarroel, Kylie's assistant and close friend.

There are a ton of cute clips from the event, most of them featuring Kendall and Kylie. It seems like Khloé was kind of the unofficial videographer for the night, and Kourtney can be seen just blissfully skating around.

In one of Kylie's snaps, she and Kendall are laying down on the floor of the rink, perfectly posing as they're prone to doing. Khloé posted a few sweet clips of Kendall, Kourtney, and Kylie all skating around together while holding hands, and you can totally tell that the sisterly love is strong. "Kylie is like, a real skater," Khloé says at one point while observing their skills.

Two of Khloé's best friends, sisters Malika and Khadijah Haqq, were also in attendance for Villarroel's party, as per Khloé and Khadijah's videos. For more than a decade now, the Haqqs have supported Khloé through thick and thin. Most recently, both sisters have been very vocal about how proud they've been of their longtime friend in the wake of the aforementioned Thompson cheating claims.

On Mar. 3, after Khloé referenced the scandal with a post on Twitter, Khadijah retweeted her comment and added praise for her pal. "I’m proud of you publicly living out your nightmares while complete strangers judge, dehumanize, and ridicule you," she wrote. "No one is perfect and we all make mistakes. But we can show them better than we could ever tell them I love you."

Along with their close-knit group of friends, the Kardashian-Jenner sisters have definitely been leaning on each other a lot lately, too. Last week, Khloé, Kylie, Kendall, and Kourtney got all dolled up and posed for a series of pictures together. Khloé captioned her snap from the night with a simple red heart emoji, and Kourtney wrote "Forever" next to hers.

No matter what's going on in their lives, the Kardashian-Jenner sisters continue supporting each other. Despite everything that's happened lately, it definitely seems like their recent bonding time is raising all of their spirits.